Fried Eggplant Slices (Жареные баклажаны) is a simple and rustic dish from my childhood. Pan fried and crispy, served with a generous dollop of fresh dill and sour cream.

We had a large backyard garden and we had rows of vegetables growing, including eggplants. It was usually in the late summer that mom would make the different eggplant recipes. Along side Fried Eggplants. Russian Eggplant Caviar was always made each summer.

How Do You Eat Eggplant?

Eggplant is kind of a funny vegetable, with many people not knowing how to eat eggplant. I'm always on the hunt for tasty eggplant recipes. Many different cultures have eggplant recipes. Greek Moussaka is one of my favorites, which is like a Greek Lasagna. In the UK, Eggplant is known as Aubergine, so you might be searching for Aubergine recipes. Eggplants can be roasted, sliced, diced, barbecued, pickled, eaten anyway you like!

One of my favorite Russian eggplant dishes is Russian Eggplant Caviar which my mom made every summer. However I fondly remember these fried eggplant slices. Eggplant is very healthy to eat, full of vitamins, low GI, cholesterol free, low in carbs and calories. However frying them would definitely add calories!

Eggplant has really unusual qualities when you eat it. My wife says that it doesn't really taste like anything. If you were to take a bit of a raw eggplant, it would be spongy, and a bit bitter, but also neutral in taste. Some eggplant recipes requiring salting before using. This draws out any bitter liquid, but leaves the eggplant soggy.

There are many different ways to eat fried Eggplant Slices. My recipe feels like Tempura style, except it's not dipped in a batter. You dip the eggplant into beaten eggs, before covering in flour. A very simple recipe. Here are some fancy recipe ideas.

Fried Eggplant tastes best when served immediately. If you wait too long before serving, they get soggy and rubbery. This is a tasty summer side dish, or appetizer. Bon Appetit! Приятного аппетита! 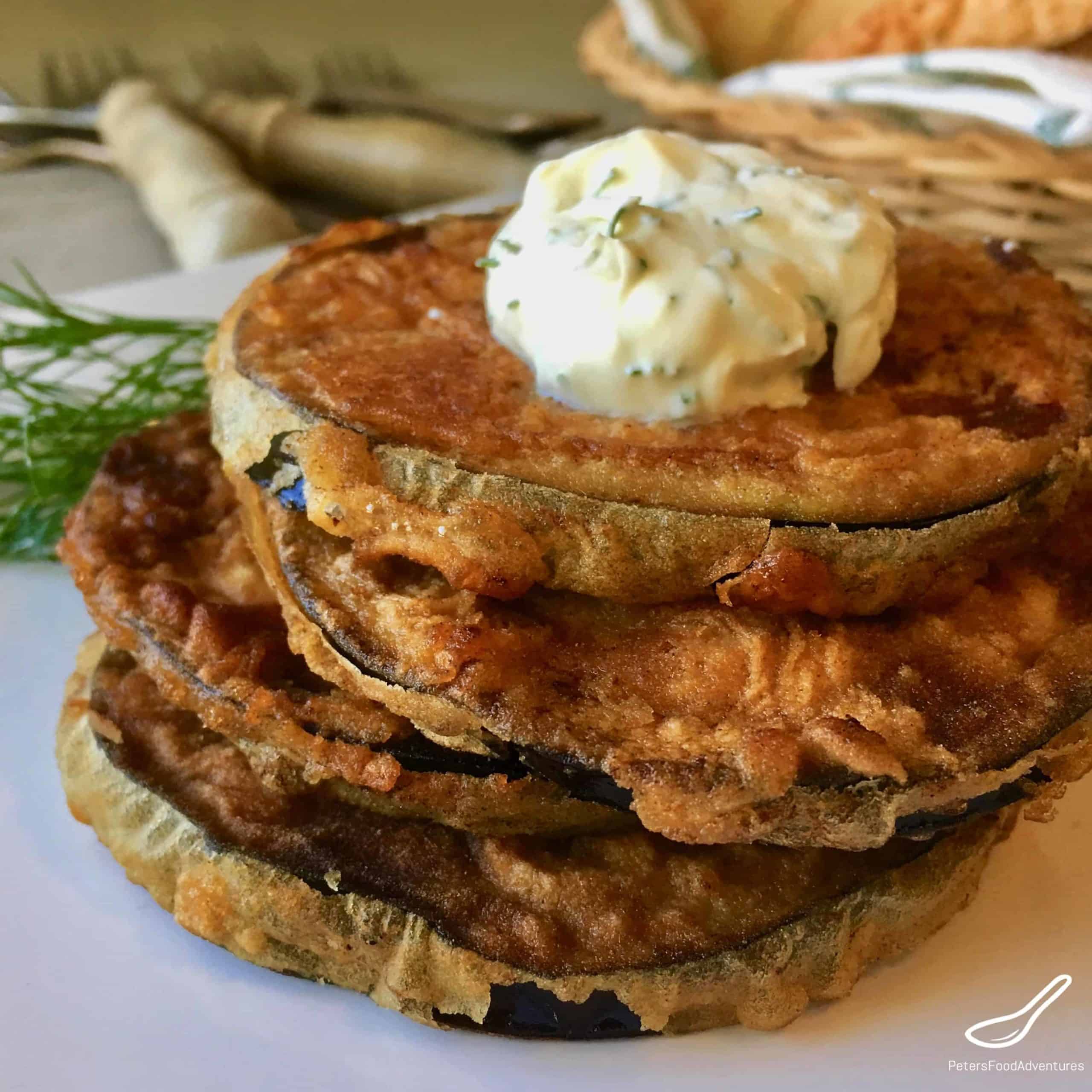 This website uses cookies to improve your experience while you navigate through the website. Out of these cookies, the cookies that are categorized as necessary are stored on your browser as they are essential for the working of basic functionalities of the website. We also use third-party cookies that help us analyze and understand how you use this website. These cookies will be stored in your browser only with your consent. You also have the option to opt-out of these cookies. But opting out of some of these cookies may have an effect on your browsing experience.
Necessary Always Enabled
Necessary cookies are absolutely essential for the website to function properly. This category only includes cookies that ensures basic functionalities and security features of the website. These cookies do not store any personal information.
Non-necessary
Any cookies that may not be particularly necessary for the website to function and is used specifically to collect user personal data via analytics, ads, other embedded contents are termed as non-necessary cookies. It is mandatory to procure user consent prior to running these cookies on your website.
SAVE & ACCEPT
1064shares