Ever wondered how to make Homemade Sour Cream? Full of probiotics, no preservatives and easy to make. Perfect for Pierogi, Chicken Stroganoff or Cabbage Rolls, everyone will love traditional sour cream! Try these 4 different methods to make Russian sour cream.

The original Russian name for sour cream is Smetana (Сметана). Creamier and tastier than sour cream you buy in a store. It's a delicious Russian export!

Yup, Sour Cream has it's origins in Russia/Eastern Europe and is called Smetana. It's a staple in all Slavic and Russian meals. It wasn't really discovered in 'the West' until the early 20th century, although popular across Eastern Europe.

How Traditional Smetana is Made

I remember watching my grandmother making traditional homemade Smetana in her kitchen. Smetana was originally made by allowing natural farm milk to ferment for a few days in a warm room or oven. Natural farm milk has more cream in it compared to what you buy in the store, which makes great Smetana. My grandma always had farm milk, but would separate the milk and cream, then let the cream ferment to make Smetana. Using cream is tastier than using milk.

Lacto-fermentation turns the top layer into thickened Smetana or Soured Cream. You would then 'smetat' (сметать) or sweep the top off, which led to the word Smetana or Sour Cream. You could still use this method, but is sometimes unpredictable.

Nowadays, Smetana usually involves adding a culture to milk, allowing it to ferment. In Russian, it's called zakvaska (закваска) which is a fermentation starter full of probiotics you can buy. I use a natural probiotic rich Greek Yogurt to make sour cream. You can also use some Russian Smetana or Homemade Sour Cream from a previous batch to kick start this batch. Simply allow to lacto-ferment for a day or two, and there you have it!

The sour cream we buy in stores isn't really sour cream, but just a starch thickened milk product. It's quite hard to find authentic sour cream without thickeners in stores. You'd never buy yogurt that doesn't have probiotics. I think many people don't even realise that sour cream is supposed to be full of probiotics!

Many sour cream recipes aren't really sour cream at all! (certainly not in the traditional sense). I call these fake sour cream recipes. They ask you to add lemon juice and vinegar, some ask you to whip it like whipped cream, and most of them have no probiotics. Boy, am I glad you came here to read about different ways to make real sour cream!

How to make Sour Cream - 4 Methods

Sour Cream Made From Heavy Cream

This is my preferred method of making homemade Sour Cream. I always use a natural, probiotic rich, Greek Yogurt that isn't thickened with gelatine or has added sugars. (read your labels!). You can also use some Russian Smetana or Homemade Sour Cream from a previous batch to kick start this batch. You also need a heavy cream or whipping cream with the highest fat content.

Sour Cream Made from Milk

This is the most economical way to make homemade sour cream. It's best when you have unprocessed milk from the cow, however that's hard to find. Use the highest cream % milk you can find.

Some people even melt a tablespoon or two of butter into the milk to increase the fat content to make this budget sour cream. This version tastes much better if making sour cream with Heavy Cream instead of milk (but will end up costing more).

Sour Cream Made from Kefir

Kefir is a Russian and Slavic staple, so it's used in so many recipes. It's found in every Russian grocery store, and isn't as expensive there as it is here. Kefir is rich in probiotics, which translates to a fantastic, healthy homemade sour cream.

Sour Cream Made from Starter

You can buy Sour Cream Starter in some health food stores or online. In Russian, this is called Zakvaska.

How Can I Use Leftover Whey?

When you have leftover whey, DON'T THROW IT OUT! It's high in protein, has low lactose and is nutritious. When I make homemade Farmer's Cheese or Homemade Sour Cream, there is usually leftover whey. I usually keep it in the fridge and use it the next day. Here are some tips to use.

How Long Can I Store Sour Cream?

When kept in the refrigerator, I usually get 7-10 days for my homemade sour cream. Some people report longer. When I make it, I usually eat it all up pretty quickly, it's so good!

Is Sour Cream the Same as Creme Fraiche?

This sometimes is an easy confusion as they are both very similar, and made in a similar way. The main difference is that Sour Cream is lower in fat content (20% fat) and tastes more sour. 🤣 Creme Fraiche has a higher fat content (30%+ fat) and has a milder taste. Both milk products should be soured with bacterial culture. 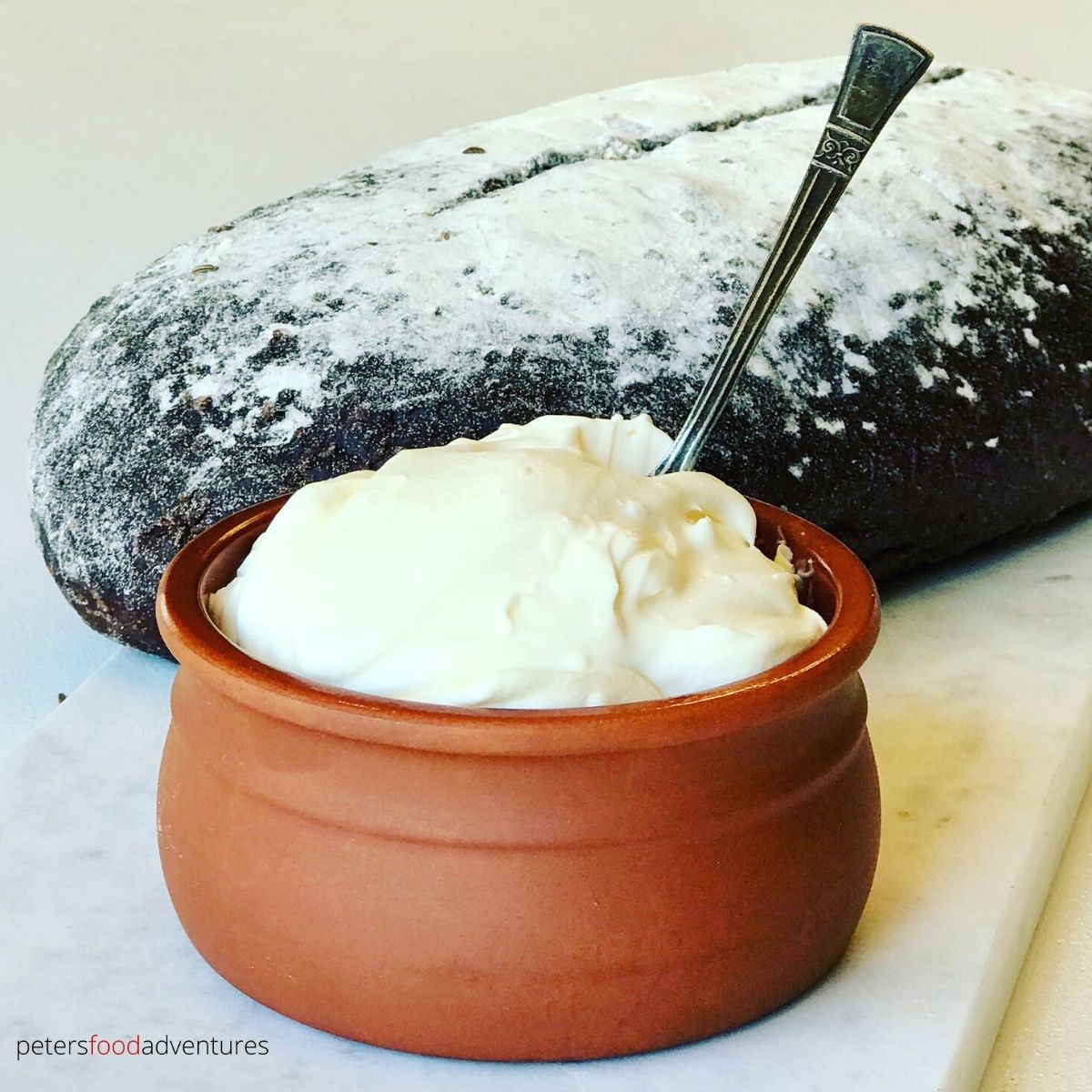 Sour Cream Made with Whipping Cream

Sour Cream Made with Milk

Sour Cream Made with Kefir

Sour Cream Made with Starter

Sour Cream Made with Whipping Cream

Sour Cream Made with Milk

Sour Cream Made with Kefir

Sour Cream Made with Starter

This website uses cookies to improve your experience while you navigate through the website. Out of these cookies, the cookies that are categorized as necessary are stored on your browser as they are essential for the working of basic functionalities of the website. We also use third-party cookies that help us analyze and understand how you use this website. These cookies will be stored in your browser only with your consent. You also have the option to opt-out of these cookies. But opting out of some of these cookies may have an effect on your browsing experience.
Necessary Always Enabled
Necessary cookies are absolutely essential for the website to function properly. This category only includes cookies that ensures basic functionalities and security features of the website. These cookies do not store any personal information.
Non-necessary
Any cookies that may not be particularly necessary for the website to function and is used specifically to collect user personal data via analytics, ads, other embedded contents are termed as non-necessary cookies. It is mandatory to procure user consent prior to running these cookies on your website.
SAVE & ACCEPT
2657 shares