This Beet Borscht recipe (Красный борщ) is an authentic Slavic soup recipe. If you love beets or beetroot as they say in the UK, then you need to try this beetroot soup recipe! Borscht exactly like my mom taught me to make it.

With roots from Ukraine and Poland, it's popular in Russia, the Baltics and across Eastern Europe (Belarus, Moldova, Latvia, Lithuania, Romania). Many countries having versions of this as part of their National cuisines. So you will commonly find Russian Borscht, or Ukrainian Borscht or Polish Borscht, Belarusian Borscht... as this soup has a place in our all shared cultural histories.

Why is Borscht Spelled with a "T"

So who knew there was a controversial way to spell borscht? Well the internet is a wonderful and crazy place, with many opinions. I never knew that people could be triggered by a spelling of a word!

I've spelled this as Borscht with a T on the end, but phonetically in Russian and Ukrainian, it's pronounced and spelled Borsch. Borscht with a T is the American spelling of this recipe. In Poland it's called barszcz, Romanians call it borș rusesc, Lithuanians know it as Barščiai. Russians, Ukrainians, Belarusians, and Moldovans call it борщ. So phonetically, it's spelled Borsh, but as most of my readers are Americans, I spell it the American way.

How to Make Borscht Soup

All tasty soups start with a really good broth, I use meaty beef bones to make my bone broth. The best bone broths are made in an Instant Pot which only takes an hour to make. You'll get the best result for the nutrients from the bones, and the meat falls off the bone to put in your soup later. My mom never used a pressure cooker and always boiled the bones for a few hours on the stove. When the borscht broth is done, just strain it through a cheesecloth to remove small impurities. You can make the broth the night before, or if in a hurry, just buy broth from the store.

Prepare all the vegetables in advance making it easy to cook. My mom always fried the onions separately until they are nice and caramelized. Caramelizing onions separately from other vegetables always seems to make the soup taste nicer. The raw beets are peeled and grated, and then caramelized with carrots and onions in a frying pan. Some people skip frying the beets and carrots, but it gives your soup a nicer color, and everything tastes better caramelized! You can also oven roast the beets and carrots before grating and adding into the soup.

Bring the broth to a boil. Add a bay leaf and the cubed potatoes and let it cook for 10 minutes. Next, add the shredded cabbage and fried onions. Cabbage can sometimes a bit extra cooking time, especially if using the thicker cabbage stems. So the cabbage is cooked first because it needs more cooking time. Some people add a few chopped tomatoes at this point of the recipe, but we never did.

Finally mix in the caramelized beets and carrots into the soup. The soup becomes borscht when you add the beets into it. It's very satisfying to watch the color of the soup change! Always add freshly chopped dill and a bit of vinegar to balance the sweetness of the beets. Borscht is always eaten with the darkest rye bread you can find, with homemade smetana (sour cream).

There are borscht variations across Eastern Europe that make it with fish, chicken, pork, various vegetables and different spices. There are many proper classic red beet borscht recipes out there, all having a common thread across our shared ancestry. Borscht should have great meaty soup base made from scratch, fresh vegetables including cabbage, potatoes, onion, carrots and beets. Of course all topped with fresh dill and sour cream. You can make a vegetarian version too.

The variations from this recipe are up to you, and do vary. It's been enjoyed by Russians, Ukrainians, Poles, Belarusians and Eastern Europeans as a signature Slavic dish. Borscht is so popular, that it was even eaten in tubes by Soviet cosmonauts in space. This is one of my very first videos, so the quality isn't great (I'm still learning), but you will still understand how I make it all.

Is Borscht healthy? Yes! Beet Borscht is a high in folate and managanese, and beets have even been known to reduce blood pressure. Beetroot has incredible health benefits. Slavs love eating beets and are creative with their beet recipe ideas.

Why Isn't My Borscht Red?

There are varying degrees of red when making Borscht Soup. As the color comes from the beets, add an extra beet for more color, especially if beets you're using are small. Not enough beets will impact the color of your soup. Caramelizing the grated beets and carrots also add a lovely red colour and flavor, so I don't recommend skipping this step.

Borscht is an incredibly healthy soup, full of vitamins and minerals. It's comfort food for my family when they get sick. At the first sign of a sniffle, I pull out my soup pot! Who needs chicken soup, this is much healthier as beets are full of health benefits. Bon Appetit. Приятного аппетита! 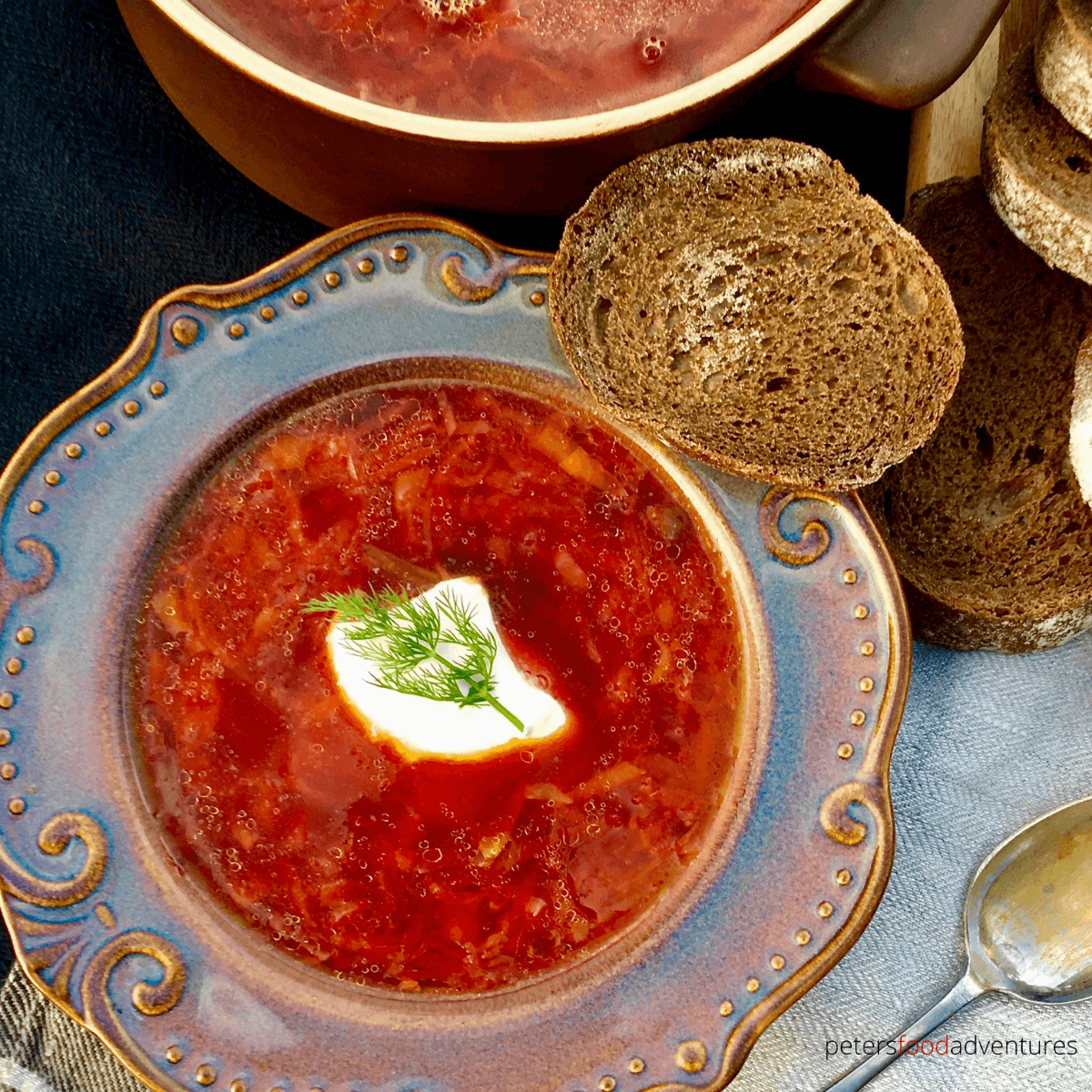 This website uses cookies to improve your experience while you navigate through the website. Out of these cookies, the cookies that are categorized as necessary are stored on your browser as they are essential for the working of basic functionalities of the website. We also use third-party cookies that help us analyze and understand how you use this website. These cookies will be stored in your browser only with your consent. You also have the option to opt-out of these cookies. But opting out of some of these cookies may have an effect on your browsing experience.
Necessary Always Enabled
Necessary cookies are absolutely essential for the website to function properly. This category only includes cookies that ensures basic functionalities and security features of the website. These cookies do not store any personal information.
Non-necessary
Any cookies that may not be particularly necessary for the website to function and is used specifically to collect user personal data via analytics, ads, other embedded contents are termed as non-necessary cookies. It is mandatory to procure user consent prior to running these cookies on your website.
SAVE & ACCEPT
1442 shares