Homemade Thai Sweet Chili Sauce is much tastier than store-bought! So much flavor with spicy red peppers, garlic and ginger. It's perfect as a marinade or dipping sauce!

I soon discovered that it was commonly used as a dipping sauce for chicken nuggets and chicken strips. Even Australian McDonald's and every fast food restaurant has Sweet Chilli sauce for dipping as an option. I found that it's particularly tasty with Asian Fried Rice, lettuce wraps or spring rolls, so many options. Australians serve Potato Wedges with this sweet chili sauce alongside sour cream.

It's pretty common to buy a large bottle of Sweet Chili Sauce available in all Asian supermarkets, but it's much tastier when you make it at home. Some people might know it by a brand name, Mae Ploy, which is available all around the world. In Thai, it's known as nam chim, which translates into "dipping sauce for chicken".

Which Chili Peppers do I use?

Thai Sweet Chili Sauce (น้ำจิ้มไก่ nam chim) is  really not hard to make, and only takes about an hour. I'm lucky that I have red Thai chilli peppers growing in my garden, also known as Bird's Eye Chilis. These peppers are much spicier than Jalapeños, but about half the heat of Habanero Peppers. If you want to substitute with other peppers, check how they rank on the Scoville unit scale. It's best made as intended, by using Bird's Eye Chili Peppers. And you don't need a lot of peppers, this recipe uses only a ½ pound or 250 grams.

In my video, I use a Potato Starch or Potato Flour to thicken the Sweet Chili Sauce. Potato Starch is a default thickener in many countries, but harder to find in North America. You can substitute with Corn Starch, which is easily found.

However, there is a reason why I prefer to use Potato Flour as a thickener, clearer liquids. Corn Starch will make the Sweet Sauce cloudier, which doesn't look as nice. There is no difference in taste, but Potato Starch keeps liquids clear and glistening in all sauces. We use it for all our thickening needs. You can find Potato Starch in Asian grocery stores or online.

You need to be very careful when simmering and cooking the chili peppers in the vinegar mixture. The vinegar heats up and is incredibly hot, and you could burn yourself if you aren't careful. When using the stick blender to blend together the chili mixture, so it doesn't splash and burn you.

The other hot is the heat of the chili peppers! Always wear disposable gloves when chopping the Red Chili Peppers. Nothing worse than accidentally touching you eyes after chopping chilis! As I mentioned, I roughly chop and de-seed about half of the peppers. It should be spicy and sweet at the same time. This recipe makes about 3 cups of sauce, so I recommend to double the recipe, you won't be sorry.

This is a vegan Chili Sauce recipe, as it should be. There is no need to add Fish Sauce, although used in Thai cooking, not necessary for this recipe. Keep it simple as the Thai people originally intended!

Does Thai Sweet Chili Sauce Need to be Refrigerated?

The answer to this question is yes and no. When my fridge gets too full, I pull out the sweet chili sauce and keep it in the pantry. It's been suggested that it will keep in the pantry for about 1 month unrefrigerated. When kept in the fridge, Sweet Thai Chili Sauce can last 9 months, even up to a year, if you don't eat it first!

Check out these Recipes!

This made from scratch Thai Sweet Chili Sauce is more flavorful than store-bought. A sweet hot sauce that's perfect for boosting flavors on your dinner plate. Bon Appetit! Приятного аппетита! 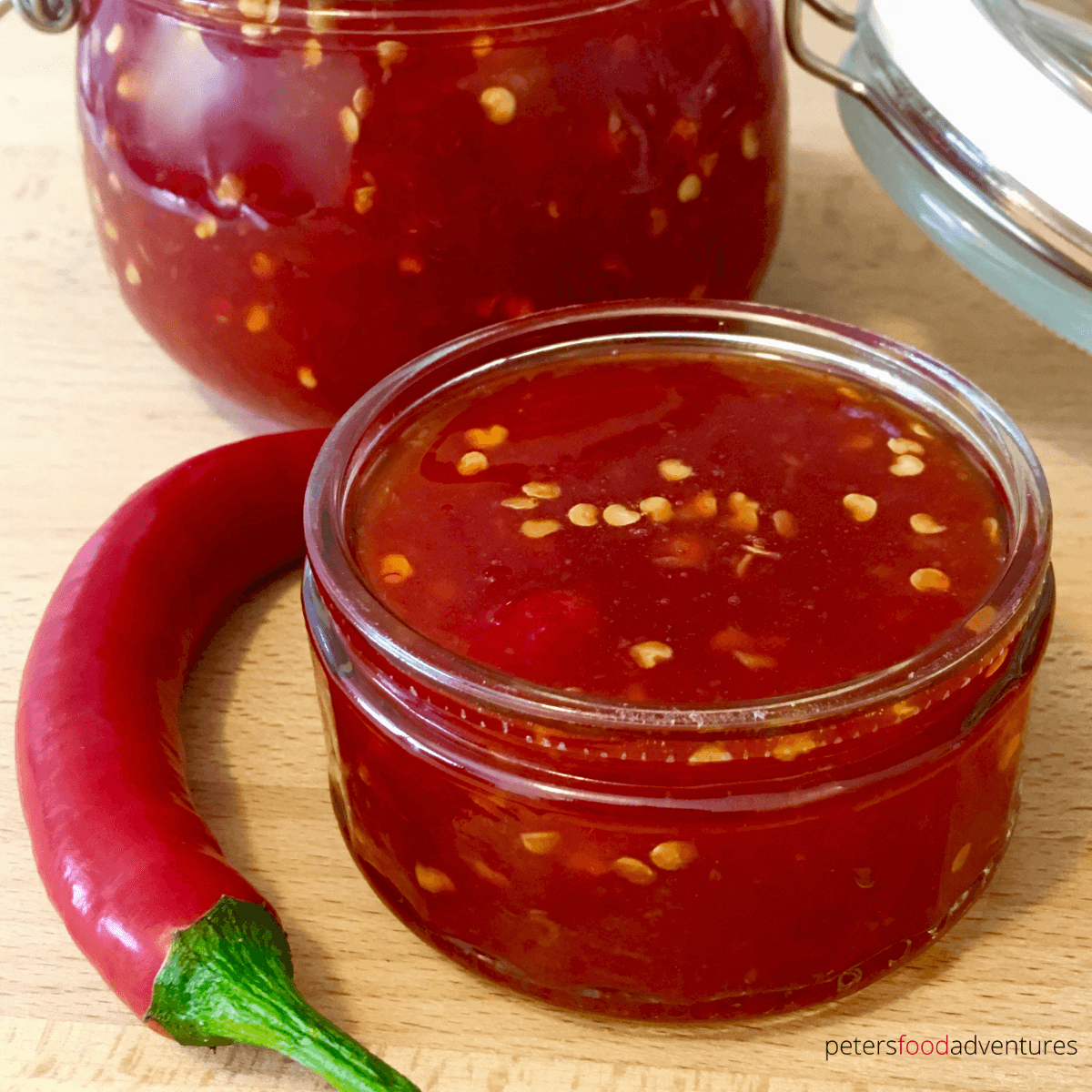 This website uses cookies to improve your experience while you navigate through the website. Out of these cookies, the cookies that are categorized as necessary are stored on your browser as they are essential for the working of basic functionalities of the website. We also use third-party cookies that help us analyze and understand how you use this website. These cookies will be stored in your browser only with your consent. You also have the option to opt-out of these cookies. But opting out of some of these cookies may have an effect on your browsing experience.
Necessary Always Enabled
Necessary cookies are absolutely essential for the website to function properly. This category only includes cookies that ensures basic functionalities and security features of the website. These cookies do not store any personal information.
Non-necessary
Any cookies that may not be particularly necessary for the website to function and is used specifically to collect user personal data via analytics, ads, other embedded contents are termed as non-necessary cookies. It is mandatory to procure user consent prior to running these cookies on your website.
SAVE & ACCEPT
15569shares