I love eating this Cheese Blintzes, especially around the holidays. It's a memory from my childhood, I'm sure that my mom made the tastiest Blintzes around. Come to think of it, anytime we had company around for dinner, mom made these was a dessert treat.

What are Cheese Blintzes?

Blintzes are a variation of Russian Blini, which are a thin, crepe like pancake. They are made with wheat flour, and stuffed with a variety of ingredients, sweet or savory. This Cheese Blintz recipe is made with Farmer's Cheese, also known as Tvorog in Russian (or Quark in German). It's so easy to make your own homemade Farmers Cheese, you don't need to buy it in the store. Homemade is much cheaper too! Some Cheese Blintz recipes are pan fried in butter before serving. In Poland and Ukraine, these are known as Nalesniki or Krokiety. My mom's Blintz recipe was always baked in the oven, like a blintz casserole. We never ate butter fried crepes. To make Blinchiki, check out my recipe here.

How to Make a Cheese Blintz Filling

The Farmer's Cheese is simply mixed with a pinch of salt, sugar and an egg. That's it. It you have a really dry Farmer's Cheese, you can mix in some cream cheese. Some people will add a teaspoon of vanilla, or even lemon zest, but I always say, try the original recipe first before adding extras.

Cheese Blintz filling should be a little tart, and not sweet. The sweetness is added from the sugar which is sprinkled over the Blintz Casserole. That's the secret for the sweet and tart cheese filling ratio. Don't over-sweeten the filling, but add extra over the cheese filled blintzes.

After rolling the blintzes like a small burrito, they are placed tightly in a baking tray. The secret to this recipe is to generously sprinkle sugar on top of the crepes before covering them with whipping cream. Bake in an oven for about 25 minutes, until they are golden brown and the sugar caramelizes.

Can Cheese Blintzes be Frozen?

Yes. This cheese blintz filling makes about 20-25 blintzes, which I separate into 2 baking trays. The first tray we eat on the day, and the 2nd tray I wrap in foil and put in the freezer. I use it within a month. To defrost blintzes, just take them out of the freezer, bring to room temperature and bake with sugar and whipping cream.

Sweet Cheese Blintzes are a delicious dessert or a breakfast treat. Popular in Russian, Jewish and Slavic families. A baked blintz recipe stuffed with Farmers Cheese Tvorog. Your family will love it. Bon Appetit! Приятного аппетита! 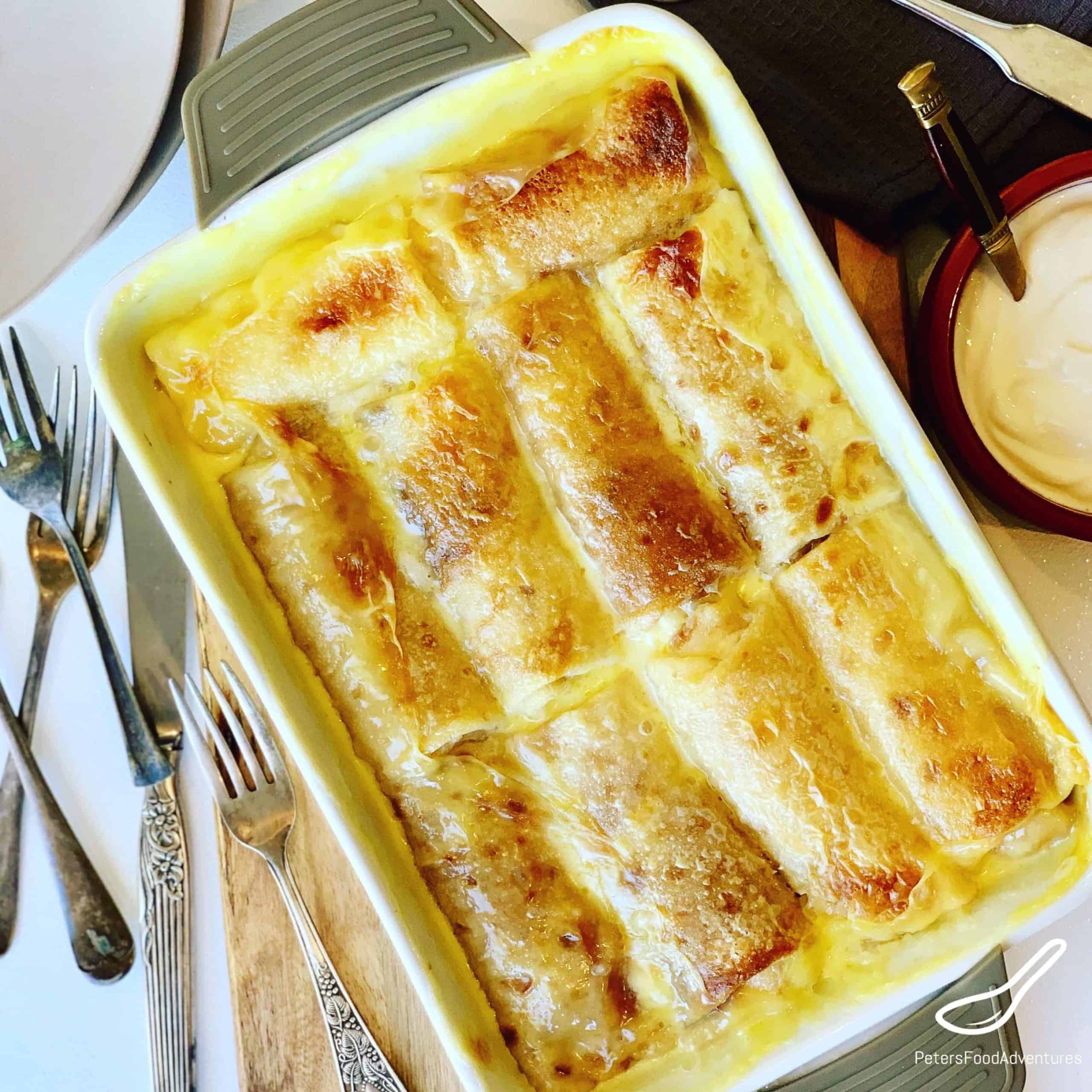 This website uses cookies to improve your experience while you navigate through the website. Out of these cookies, the cookies that are categorized as necessary are stored on your browser as they are essential for the working of basic functionalities of the website. We also use third-party cookies that help us analyze and understand how you use this website. These cookies will be stored in your browser only with your consent. You also have the option to opt-out of these cookies. But opting out of some of these cookies may have an effect on your browsing experience.
Necessary Always Enabled
Necessary cookies are absolutely essential for the website to function properly. This category only includes cookies that ensures basic functionalities and security features of the website. These cookies do not store any personal information.
Non-necessary
Any cookies that may not be particularly necessary for the website to function and is used specifically to collect user personal data via analytics, ads, other embedded contents are termed as non-necessary cookies. It is mandatory to procure user consent prior to running these cookies on your website.
SAVE & ACCEPT
1621 shares