I love making this Shchi - Russian Cabbage Soup Recipe when the weather gets cold. It's comforting to warm up with a hot bowl of home made soup, especially if it's a soup that you grew up with. Alongside Cabbage Piroshki, these are some of my favorite foods as a kid.

What is Russian Cabbage Soup?

Shchi soup has been eaten in Russia for about a 1000 years, every since cabbage was introduced to Russia. Shchi is a staple on every Russian table, usually served with sour cream and rye bread. There's a saying in Russian,"Щи да каша — пища наша." which means Shchi and kasha - are our food.

One of the main differences between Shchi and Borscht is the addition of beets. Shchi is like the soup base for borscht, growing up we just called all variations of Shchi as borscht (which wasn't technically correct). As similar as these soups are, they do have different names based on their recipes.

Another variation of Shchi Soup is called Green Borscht, if you add sorrel or spinach. Shchi can also be made with sauerkraut, which would be called a Sour Shchi. Check out my other popular Russian and Slavic soup recipes.

You can make this as a vegetarian recipe using vegetable stock, which is popular during Lent, or if you're a vegetarian! 🤣 However, I prefer more of a meaty cabbage soup. I always make my soup stock with meaty bones the night before in my Instant Pot. This allows me to 'assemble' the soup when I'm ready.

When making the bone broth for Shchi, it's best to use the meatiest beef bones you can find, so you can pick off the meat to use in your soup. You can buy soup stock, but it won't taste the same, and you won't have the extra meaty goodness.

How to Make Cabbage Soup

Bring the stock to a boil and add the cabbage, bay leaf and potatoes and simmer for about 20 minutes. When you add the cabbage into the soup, it's going to seem like a lot, but it's ok, it cooks down significantly, trust me.

While it's simmering, caramelize onions and carrots in a frying pan until they start to lightly brown. Add the red pepper and cook for 2 more minutes, finally adding the tomatoes. Throw it all together into the soup pot, including any meat from the bones and simmer for about 10 minutes.

Most Shchi - Russian Cabbage soup aren't made with red peppers in the recipe. My mom always made it with red peppers, usually because we had them growing in the garden. There are many different variations of this soup, the further south you were located in Russia, the more likely you would add red peppers.

Cabbage soup is sometimes made with sauerkraut if fresh cabbage isn't available. Throw a small jar into this recipe, you'd be surprised how good it tastes in soup, adding just a bit of tang in the soup.

Can You Freeze Cabbage Soup?

Yes! The great thing about this recipe is that it freezes well. Just pop your leftovers in the freezer for an easy meal to be enjoyed another day! 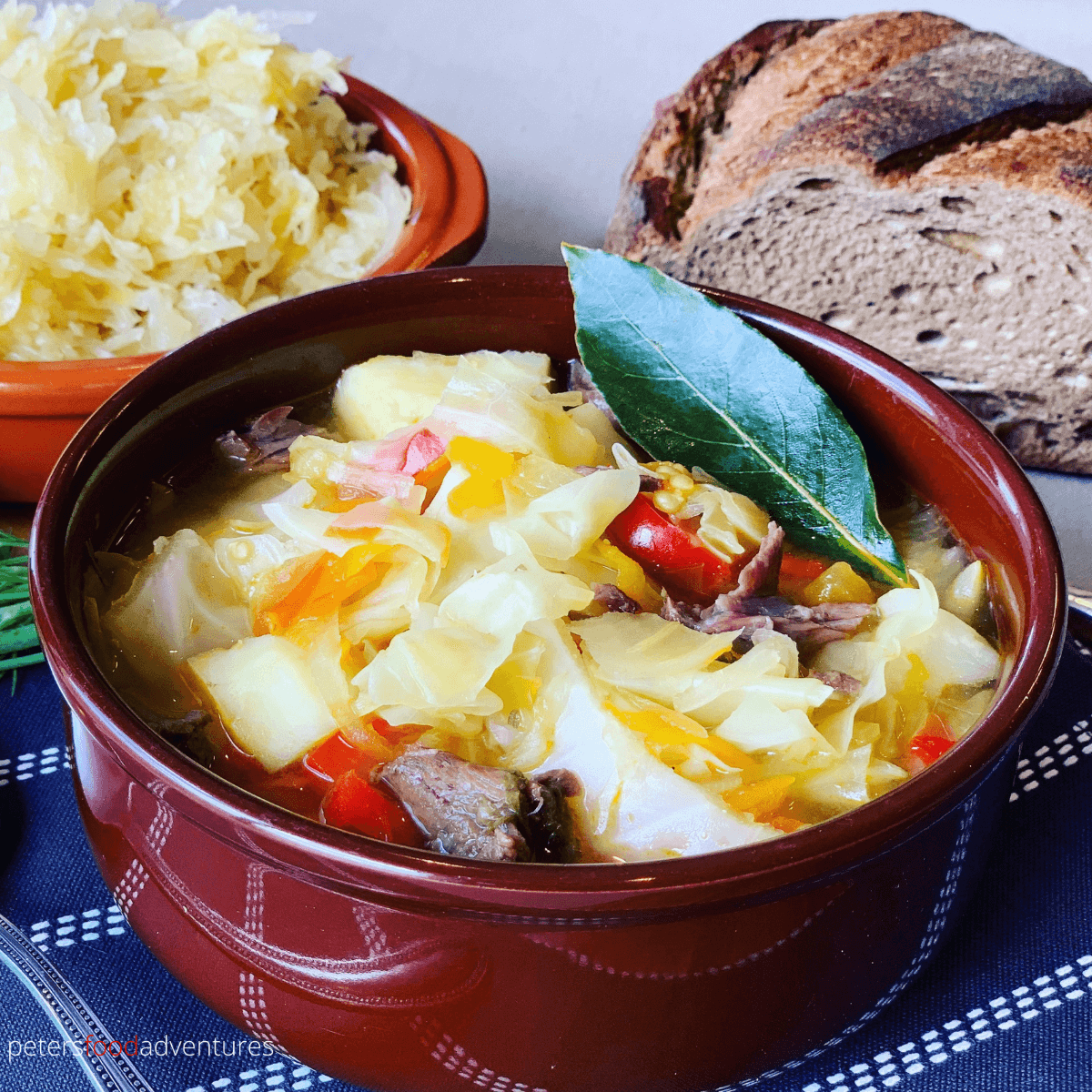 This website uses cookies to improve your experience while you navigate through the website. Out of these cookies, the cookies that are categorized as necessary are stored on your browser as they are essential for the working of basic functionalities of the website. We also use third-party cookies that help us analyze and understand how you use this website. These cookies will be stored in your browser only with your consent. You also have the option to opt-out of these cookies. But opting out of some of these cookies may have an effect on your browsing experience.
Necessary Always Enabled
Necessary cookies are absolutely essential for the website to function properly. This category only includes cookies that ensures basic functionalities and security features of the website. These cookies do not store any personal information.
Non-necessary
Any cookies that may not be particularly necessary for the website to function and is used specifically to collect user personal data via analytics, ads, other embedded contents are termed as non-necessary cookies. It is mandatory to procure user consent prior to running these cookies on your website.
SAVE & ACCEPT
1529 shares