These easy Bread Machine Cinnamon Rolls are perfectly soft and fluffy, generously slathered with a vanilla bean cream cheese frosting. I can't get enough of this recipe, reminds me of Cinnabon cinnamon rolls.

When I moved to Australia, there wasn't a Cinnabon here, they probably make the tastiest cinnamon buns in the world! This recipe is my homage to Cinnabon, creating my Cinnabon copycat recipe, using a bread machine.

The easiest part of this easy cinnamon rolls recipe is making the yeast dough. Many people are scared to make yeast dough as it seems complicated, and needs time to rise. Don't be scared of yeast dough any more! Using a break machine's dough cycle makes it so easy. Just throw all the ingredients in, press the dough cycle and your yeast dough is ready in 90 minutes.

When the dough comes out of the bread maker, it will be sticky. Place it on a floured surface, just don't knead it to death, it needs to be fluffy but not sticky. Roll it out, slather in melted butter and cover with the cinnamon sugar mix.

Not everyone has a bread machine to make dough, but you can still make this tasty recipe. I have an easy sweet Master Yeast Dough recipe that works perfectly with this recipe. Just prepare the dough as per instructions from the link (or video) and follow along for the rest of the cinnamon roll recipe.

Of course, you have to use cream cheese frosting for your homemade cinnamon rolls. This is not a recipe for you if you are on a diet! You need lots of cream cheese, butter, icing sugar and vanilla bean paste (or vanilla).

This frosting recipe makes a very generous serve of cream cheese. I hate going to Cinnabon, and they give you a small stingy portion of frosting, forcing you to pay for a bigger size. Maybe I just hate paying for things that don't cost much money to make, so I'm extra generous at home. 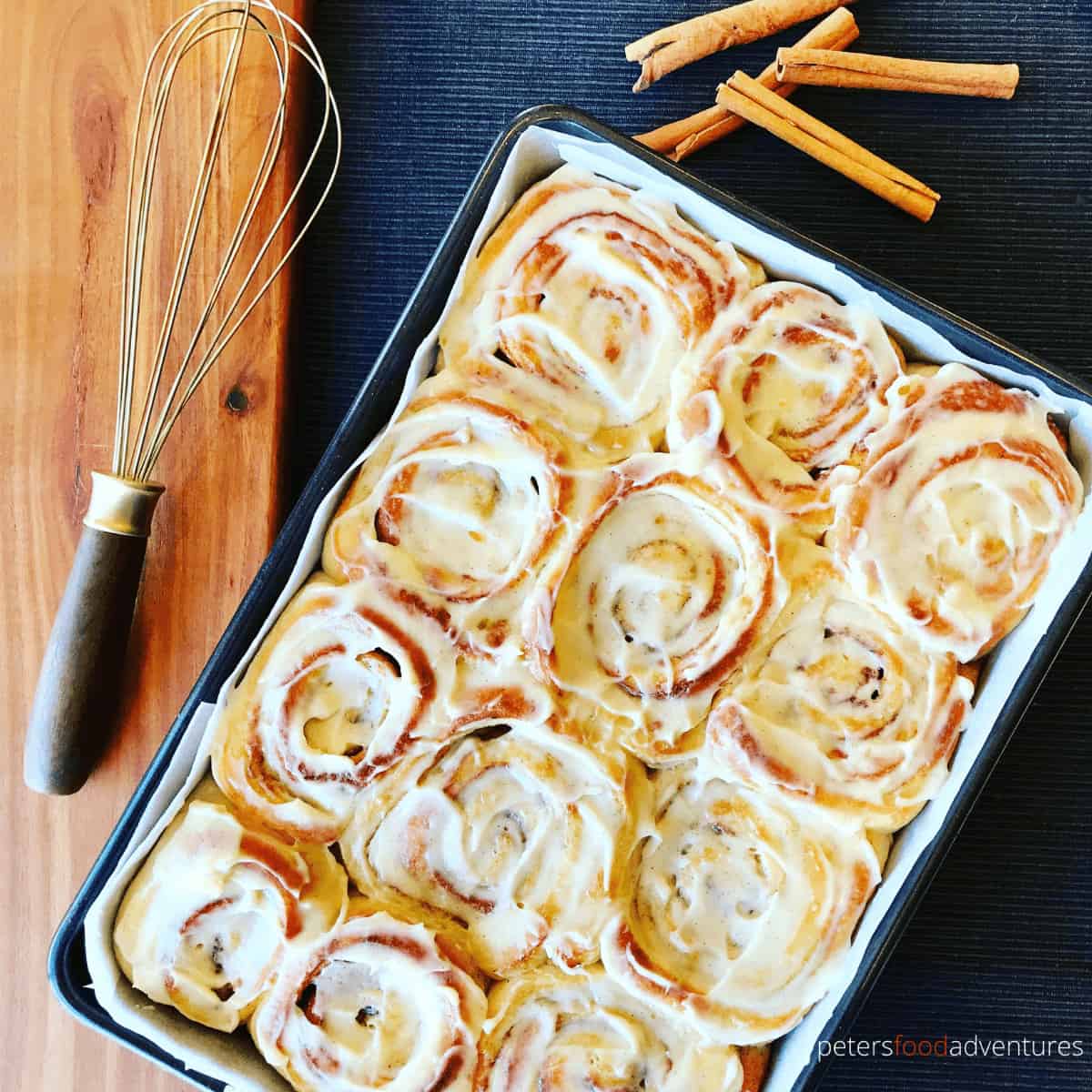 This website uses cookies to improve your experience while you navigate through the website. Out of these cookies, the cookies that are categorized as necessary are stored on your browser as they are essential for the working of basic functionalities of the website. We also use third-party cookies that help us analyze and understand how you use this website. These cookies will be stored in your browser only with your consent. You also have the option to opt-out of these cookies. But opting out of some of these cookies may have an effect on your browsing experience.
Necessary Always Enabled
Necessary cookies are absolutely essential for the website to function properly. This category only includes cookies that ensures basic functionalities and security features of the website. These cookies do not store any personal information.
Non-necessary
Any cookies that may not be particularly necessary for the website to function and is used specifically to collect user personal data via analytics, ads, other embedded contents are termed as non-necessary cookies. It is mandatory to procure user consent prior to running these cookies on your website.
SAVE & ACCEPT
4386 shares