Have you ever eaten Loquat Apple Crumble? Do you know what loquats are? Loquats sometimes are called Japanese Plums or Japanese Medlars. They are closely related to apples and have a slightly poisonous seed, similar to an apricot kernel, but you'd need to eat a serious amount to get sick.

Loquats have a tangy and have a sweet flavour, which I can't really explain. They say it has the flavour of a peach, apricot, citrus and mango. You usually can't find them at the store, because they tend to bruise easily and have a shelf life of around a week.

When I first move to Australia, I discovered this fruit that ripens in late winter, when I don't have much happening in the garden. Plus I get lots of free fruit! Have you seen the price of fruit lately? (That statement makes me feel old). I usually have so many Loquats, I don't know what to do with them. I also make a delicious Loquat Jam with Vanilla Bean that you need to check out. Jam is a great way to preserve a lot of fruit at the same time, plus everyone loves jam.

Loquats seem to have fallen out of fashion as a fruit for some reason, unfortunately it's not a cool fruit anymore. However they are really tasty, and full of vitamins such as Vitamin A, minerals and antioxidants. It's said that loquats are incredibly healthy for your colon, and are high in fibre. You can find them in older neighbourhoods in Perth's backyards, and are a favourite of the lorikeet parrots (I've covered them with a protective net).

Loquats are related to apples, they are the tropical cousin! That's what makes them perfect as part of your Apple crumble recipe, Loquats complement apples! I don't peel the loquats, but de-seed them (as the seeds are tiny bit poisonous like apple seeds). Some people peel the loquats, and you can do that, but it's a lot of effort as they are kind of tiny!

How to Prepare Loquats

This is an easy loquat recipe. Some people like to blanch their loquats in hot water before peeling the fruit before using. I find this very time consuming and unnecessary. Yes, the skin can feel a bit thick, but it's not a problem when it cooks. The important thing is to de-seed the loquats. Cut then into quarters, and cut out the middle including the seed. It will remind you of an apple. Thats it!

How to Make Loquat Apple Crumble

The rest of the recipe is just like an Apple Crumble recipe, with loquats added into the mix. I use plenty of butter, brown sugar with cinnamon and nutmeg to get the flavor I love. You can use a large baking dish, or smaller individual sized oven proof dishes.

This recipe is so easy to make. Mix together the loquats and apples with lemon an vanilla, and place into your greased baking dish. The hardest part of this recipe is to make the crumble, which just take a minute to make. Mix the flour, oats, sugar and spices together in a bowl, and add cold butter. Using a fork, mix it all into the oat mixture until it crumbles. Sprinkle it over the your apples before baking in an oven for about 35 minutes.

You might not know what to do with your abundance of loquats (which is half the problem). Or perhaps you want to borrow your neighbour's overhanging fruit? Loquat Apple Crumble is an easy & delicious recipe suggestion. Bon Appetit! Приятного аппетита! 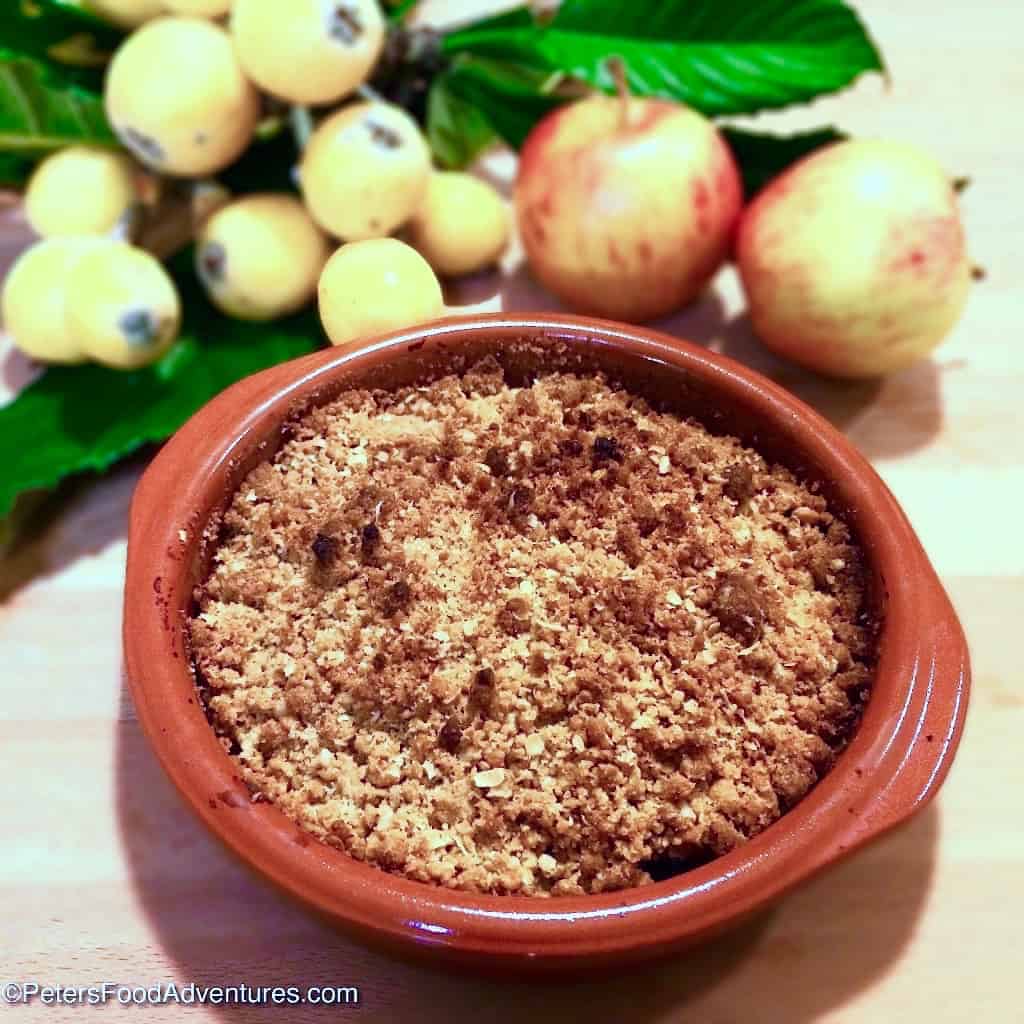 How to use Loquat fruit? Make a Apple and Loquat Crumble! Also known as Japanese Plum, it's a recipe that's easy to make and a delicious. A great way to use up an abundance of fruit, a tasty recipe that everyone will love! A perfect way to use up a fruit, that many people have forgotten about!
No ratings yet
Print Recipe Pin Recipe Rate Recipe
Prep Time: 40 minutes
Cook Time: 35 minutes
Total Time: 1 hour 15 minutes
Course: Dessert
Cuisine: American, Australian
Keyword: loquat crumble, loquat recipe
Author: Peter Kolesnichenko

This website uses cookies to improve your experience while you navigate through the website. Out of these cookies, the cookies that are categorized as necessary are stored on your browser as they are essential for the working of basic functionalities of the website. We also use third-party cookies that help us analyze and understand how you use this website. These cookies will be stored in your browser only with your consent. You also have the option to opt-out of these cookies. But opting out of some of these cookies may have an effect on your browsing experience.
Necessary Always Enabled
Necessary cookies are absolutely essential for the website to function properly. This category only includes cookies that ensures basic functionalities and security features of the website. These cookies do not store any personal information.
Non-necessary
Any cookies that may not be particularly necessary for the website to function and is used specifically to collect user personal data via analytics, ads, other embedded contents are termed as non-necessary cookies. It is mandatory to procure user consent prior to running these cookies on your website.
SAVE & ACCEPT
394 shares