Every Russian and Ukrainian household has grown up eating Vareniki dumplings. They are an Eastern European staple, known in many countries by many different names. There are so many different ways to stuff them, from the Americanized Potatoes and Cheddar Perogies, fruit filled, to these Tvorog or Farmer's Cheese Vareniki (Вареники с Творогом). They are similar to Russian Pelmeni Meat Dumplings.

There are many Farmer's Cheese Vareniki that are made slightly sweetened and served with fruit, but not this recipe. We grew up eating these savory dumplings, slathered with homemade sour cream. You can even add fresh chopped dill into the Farmer's Cheese mixture. I love fresh dill, most Russians eat it by the truckload!

This is always a fun question when politics collide with food. Slavic Dumplings are known by many different names in many countries. In Poland, they are known as Pierogi, in Slovakia as Pirohy, in Hungary as Derelye, in Ukraine and Russia as Vareniki.

It's considered that Vareniki originated in modern day Ukraine, but are also considered by Russians are part of their shared food cultures. One thousand years ago, Kievan Rus was a federation of Eastern Slavic tribes, with power mostly consolidated in Kiev. Slavs from the Kiev region colonized what is now Moscow. The same blood and shared food history of these nations go back for many centuries.

When making the filling, if the Farmer's Cheese you bought or made is less dry than you'd like, start mixing one egg, as you dont want to have your mixture too runny. It shouldn't be juicy.

How to Make Vareniki

Every tasty dumpling begins with a great dough recipe! Mine is really simply and versatile for any Slavic dumplings, see other recipe ideas below. Mix together flour, egg, salt, oil and water together until it makes a sticky ball. Knead it using your hands for about 5 minutes. This will feel like forever, but keep going for 5 minutes! Cover it with a bowl and allow it to rest for about an hour (can use it at 30 minutes if in a hurry).

While the dough is resting, make the Farmer's Cheese Filling. Mix together the Farmer's Cheese, eggs and salt. It's that easy! Roll out the dough to about ⅛" thick on a floured surface and cut some 3" dough circles. Place a spoonful of tvorog filling in the centre of the circle. Carefully fold in half and pinch to seal the Vareniki shut. Careful not to have the filling touching the edges, or it will unseal in the water.

Place the Vareniki on a tray and freeze for at least 30 minutes. Place the individually frozen Vareniki into a Ziplock bag for an easy dinner later. This is such an easy recipe that makes such an easy dinner after a busy day at work! Making Vareniki is great as a group activity. Sounds strange, but invite friends over, everyone making Vareniki, and share your hard work. It goes much faster in a group!

How Long to Cook Vareniki?

If you are making fresh Vareniki, you will likely want to eat some right away! This is the faster way to cook them. Bring a pot of salted water to a boil. Carefully drop your Vareniki in them, and cook them until they start to float. This will take 5-7 minutes. The Vareniki are ready when the pasta dumpling dough is ready. Using a spoon, carefully stir the dumplings as they can stick to the bottom of the pot. The trick is to be so careful when stirring, that you don't tear the Vareniki! Frozen Vareniki will take a few minutes longer.

How to Serve Vareniki

After removing the dumplings from the stock pot, either with a slotted spoon or into a colander, place them into a bowl. Toss them with a few slices of butter, until they are all coated in buttery goodness. Serve with sour cream, homemade is best! If you have leftover Vareniki, fry them in a frying pan with a few teaspoons of butter. All dumplings taste better fried in butter. Leftover Vareniki that are fried in butter are my favorite way to enjoy them, slathered in sour cream!

Check Out My Slavic Dumplings

Vareniki are Slavs ideal comfort food, made sweet or savory. Make ahead and flash freeze them on a tray before freezing in Ziploc bags for an easy meal later on. Homemade always taste best. Bon Appetit! Приятного аппетита! 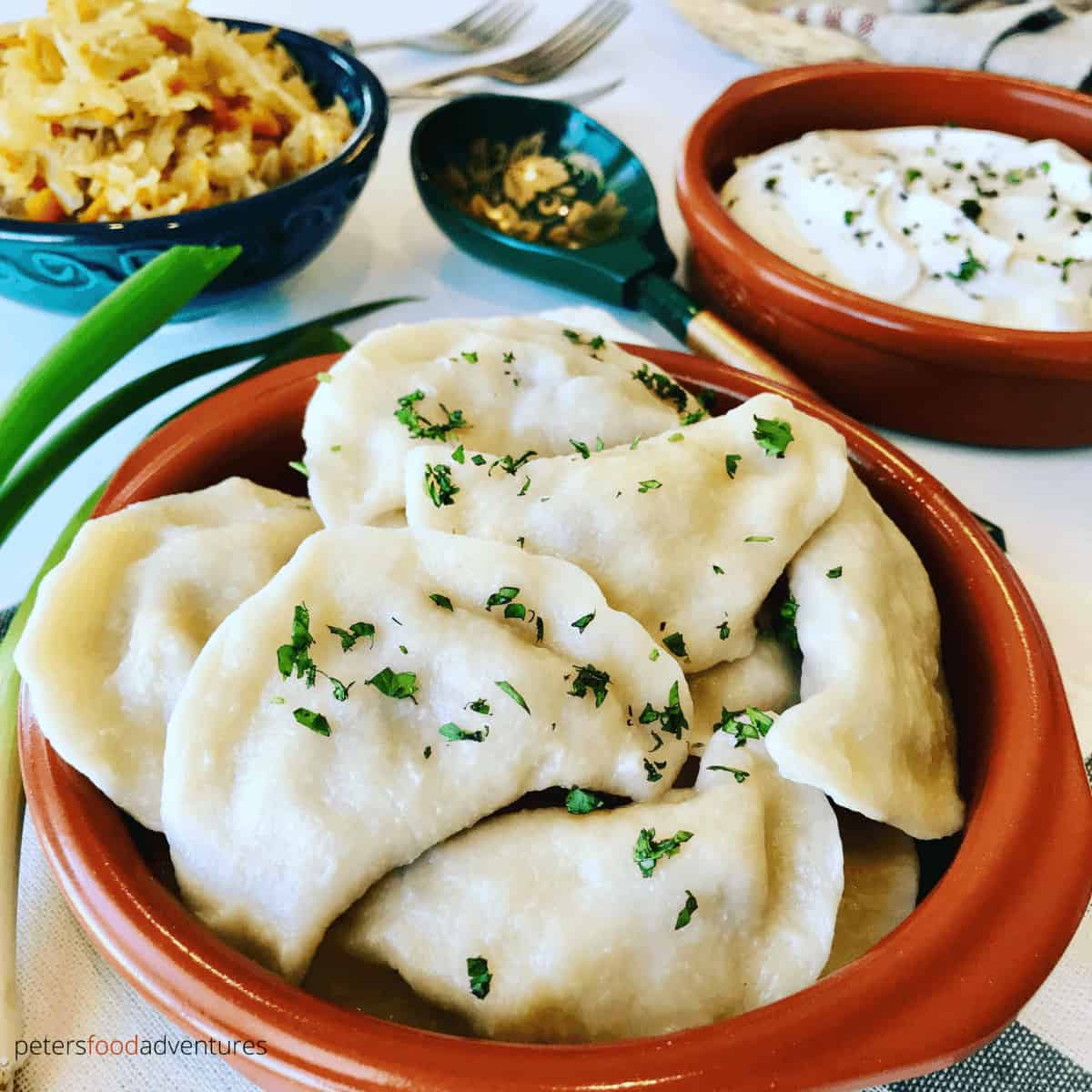 How to make Vareniki dough

This website uses cookies to improve your experience while you navigate through the website. Out of these cookies, the cookies that are categorized as necessary are stored on your browser as they are essential for the working of basic functionalities of the website. We also use third-party cookies that help us analyze and understand how you use this website. These cookies will be stored in your browser only with your consent. You also have the option to opt-out of these cookies. But opting out of some of these cookies may have an effect on your browsing experience.
Necessary Always Enabled
Necessary cookies are absolutely essential for the website to function properly. This category only includes cookies that ensures basic functionalities and security features of the website. These cookies do not store any personal information.
Non-necessary
Any cookies that may not be particularly necessary for the website to function and is used specifically to collect user personal data via analytics, ads, other embedded contents are termed as non-necessary cookies. It is mandatory to procure user consent prior to running these cookies on your website.
SAVE & ACCEPT
1397 shares