Grilled Corn on the Cob is such a delicious rustic side dish from my childhood. Growing up with a large backyard garden, we always had a few long rows of corn growing. In the autumn, we would clear the yard for winter before the snow came, and have a burn off with a large bon fire. Into the hot coals, we would throw foiled potatoes and fresh corn on the cob to be cooked in the coals. Living in an urban neigbourhood, it's not possible to have a large bonfire, but everyone has a barbecue.

How to Grill Corn on the Cob with Husks

Some people grill corn on the cob by removing the husks, and using foil to wrap the corn to keep it from burning. While that works ok, I think it's better to use the natural husks, as God intended! 🙂

They key is to soak the corn with husks on, in water for at least 10 minutes (longer is ok). Most people use a string to tie the husks together. It's optional to tie the corn husks with wire. I used wire as I think the string will burn off, exposing and burning the bbq corn (plus all guys have wire lying around). I really don't like the taste of burnt corn, so tying it close together is important for me.

The herb butter mixture is flexible with the flavors you want to add. I just throw in whatever herbs I have growing in the garden. I always use parsley, basil and oregano because that's what's always growing in my garden. You can also add spices, such as cumin and paprika, or even cajun spice, for a different buttery flavor on your bbq corn. Experiment and have some fun with the butter.

It's so easy to make this dish, with a great visual appeal when you make Grilled Corn on the Cob with Fresh Herb Butter. Perfect for your next backyard bbq. Bon Appetit! Приятного аппетита! 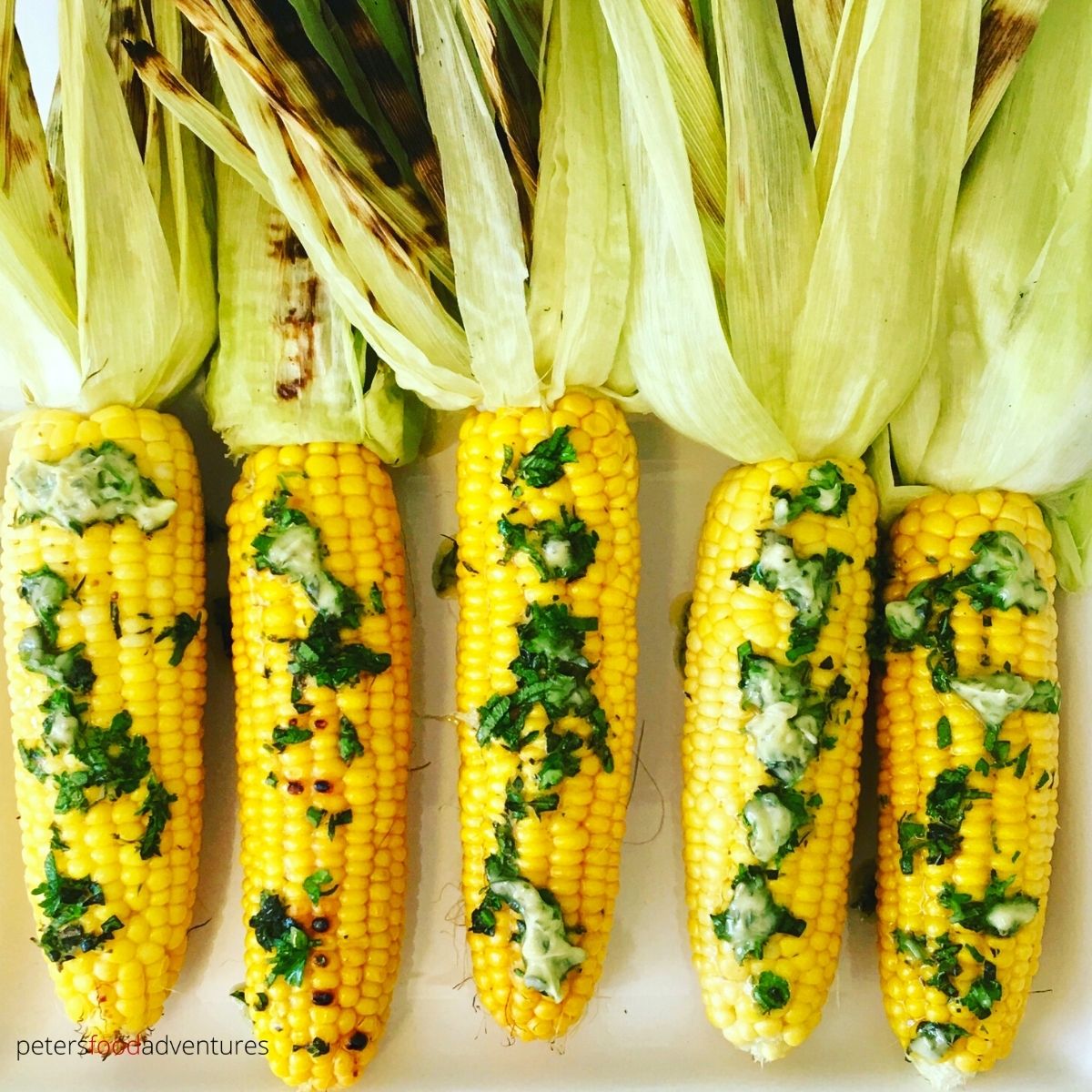 Grilled Corn on the Cob with Herb Butter

This website uses cookies to improve your experience while you navigate through the website. Out of these cookies, the cookies that are categorized as necessary are stored on your browser as they are essential for the working of basic functionalities of the website. We also use third-party cookies that help us analyze and understand how you use this website. These cookies will be stored in your browser only with your consent. You also have the option to opt-out of these cookies. But opting out of some of these cookies may have an effect on your browsing experience.
Necessary Always Enabled
Necessary cookies are absolutely essential for the website to function properly. This category only includes cookies that ensures basic functionalities and security features of the website. These cookies do not store any personal information.
Non-necessary
Any cookies that may not be particularly necessary for the website to function and is used specifically to collect user personal data via analytics, ads, other embedded contents are termed as non-necessary cookies. It is mandatory to procure user consent prior to running these cookies on your website.
SAVE & ACCEPT
772 shares