I love Khinkali, maybe even more than Pelmeni Dumplins and Vareniki (Perogies)! Delicious little Georgian dumplings stuffed with meat, herbs and spices, and juicy broth in every bite!

First time I tried Khinkali was in St Petersburg, Russia at the restaurant across the street from our apartment. Georgian food is amazing, and not commonly recognized outside of the former Soviet Union. I am not an expert on Georgian food, but had to learn how to make Khinkali. They are like Russian Pelmeni dumplings on steroids! (say no to drugs kids).

Growing up eating Pelmeni, a Russian boiled dumpling with beef and onion, comparing Khinkali, they have so much more flavor! It helps that I love eating cilantro and cumin, a perfect mixed with the ground beef. There are many variations of what spices Georgians add to their Khinkali. This is my version. You can pull back the herbs and spices to make a more boring recipe, but I don't recommend!

What meat is Khinkali made with?

This is a Beef Khinkali recipe, as we tend to eat everything beef. However, you don't have to be limited to only making Khinkali with beef. Lamb is popular in the Caucasus region, but more expensive to use out here. You could also mix different meats such as pork and beef together.

How to eat Khinkali

This is not a knife and fork type of meal! You eat Khinkali with your hands, upside down! The Khinkali are upside down, not you! The top knob of the dumpling is what you hold the Khinkali by, flip over and take a small bite. This is to allow the juicy broth inside to be sucked out.

Compared to most dumplings, Khinkali are super juicy, and you need to drink all the broth-y goodness before eating. Eat the rest of the dumpling, leaving the dough knob on your plate. Truth be told, I sometimes eat the whole thing as I love fresh pasta! However, you're only supposed to eat the dumpling and meat!

How to Make Khinkali

I use a KitchenAid mixer with a roller attachment to roll out the dough. How this is different to most dumplings, is that the dough is cut into squares, not circles. This allows for enough dough to be pinched into a knob at the top.

The Khinkali meat mixture feels quite watery when preparing, due to the added water. The water is necessary to ensure that the pockets of meat cook in their own broth. When biting the Khinkali, the hot broth pours out! You don't want dry Georgian dumplings!

The tricky part is sealing the meat inside the dumpling. Close it up by forming a sack by pinching pieces of dough into each other (creating pleats). Pinch the pleats together to seal the sack, forming a little knob at the top, and twist off any excess dough from the top of the dough knob. Georgian women do this so fast, it's incredible. The Khinkali are boiled in water until they float, and are ready to eat!

The other secret Georgian spice is Blue Fenugreek. Usually easily found in your Russian deli or European Deli, also called Utskho Suneli. I ran out, and had to use regular ground Fenugreek for this recipe. The difference is that Blue Fenugreek is milder, so I suggest using ½ a teaspoon less if you can only find regular Fenugreek.

I know that my Khinkali aren't as pretty as a native Georgian cook's are, however, I'm excite to share this authentic recipe. One of my favorite dumplings, Georgian Khinkali. Popular in Russia and across the former Soviet Union. You've got to try this! Bon Appetit! Приятного аппетита! 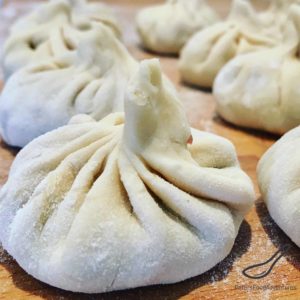