Every Russian household has grown up eating Vareniki dumplings. They are an Eastern European staple, known in many countries by many different names. There are so many different ways to stuff them, from Potatoes and Cheddar Perogies, fruit filled, to these Tvorog or Farmer's Cheese Vareniki (Вареники с Творогом). They are similar to Russian Pelmeni Meat Dumplings.

There are many Farmer's Cheese Vareniki that are made slightly sweetened and served with fruit, but not this recipe. We grew up eating these savory dumplings, slathered with homemade sour cream. You can even add fresh chopped dill into the Farmer's Cheese mixture. I love fresh dill, most Russians eat it by the truckload!

This is always a fun question when politics collide with food. Slavic Dumplings are known by many different names in many countries. In Poland, they are known as Pierogi, in Slovakia as Pirohy, in Hungary as Derelye, in Ukraine and Russia as Vareniki.

It's considered that Vareniki originated in modern day Ukraine, but are also considered by Russians are part of their shared food cultures. One thousand years ago, Kievan Rus was a federation of Eastern Slavic tribes, with power mostly consolidated in Kiev. Slavs from the Kiev region colonized what is now Moscow. The same blood and shared food history of these nations go back for many centuries.

When making the filling, if the Farmer's Cheese you bought or made is less dry than you'd like, start mixing one egg, as you dont want to have your mixture too runny. It shouldn't be juicy.

This Vareniki recipe is great to do as a group activity. Sounds strange, but invite friends over, everyone making Vareniki, and share your hard work. It goes much faster in a group!

Vareniki are Slavs ideal comfort food, made sweet or savory. Make ahead and flash freeze them on a tray before freezing in Ziploc bags for an easy meal later on. Homemade always taste best. Bon Appetit! Приятного аппетита! 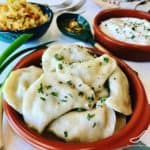 How to make Vareniki dough