I love this tested and true Blini Recipe from my childhood. My mom would have made thousands of these over the years. A versatile recipe that can be enjoyed for breakfast, lunch, dinner or even as a dessert!

Russian Crepes, usually called Blini or Blinchiki (if they are stuffed) are a version of thin Russian pancakes that I grew up eating, usually for breakfast on Saturday mornings. As simple as it is to make, it's still a lot of work as it takes time. Blintzes are a type of blini (blintzes, crepes, blini and blinchiki are the same thing).

Where Did Blini Originate?

Blini originated in Pagan Russia over 1000 years ago. There is an old traditional Russian festival called Maslenitsa (Масленица), which means Butter Week or Crepe Week, and dates as far back as the 2nd Century. This celebrates the end of winter, and the coming of spring. This celebration also falls on the last week before the Great Lent, some people eat them all week long. We love our blini!

There are so many variations of how to make blini. You can use yeast batter, un-yeasted, buckwheat flour, wheat flour, only kefir, buttermilk, only water, only milk, adding hot water to the milk, the list goes on.

If you're not Russian, you might see small, mini appetizer sized blinis that's served with caviar, sold in stores. While those are great to eat with caviar, this is the traditional Russian Blini recipe that's most popular at breakfast. This blini recipe is the large pancake style blini.

I like to keep thing simple. My recipe is un-yeasted, using milk, flour, eggs, water, sugar, salt and oil for frying (which is a healthier attempt instead of using butter). I've never been a fan of yeasted blini, or blini made with buckwheat flour. Traditional old style blini were made with yeast and baked in a Russian oven. This recipe is much easier and tastes better in my opinion.

How to Make Blini

This is the easy part, using an electric mixer, beat it all together until the lumps are gone. It should have the consistency of a thick cream, and it shouldn't be runny like milk. I always use 2 frying pans when making blini, but you can use specially made crepe pans as well. You want to lightly oil the pans before you add the blini batter.

If you stab a stick of butter with a fork, you can use it to butter the pan instead of oil. I use a folded paper towel to soak up any excess oil, and reuse when adding oil to the pan. Some people love using only butter to oil the frying pan. If you omit the stick of butter from this recipe, you'd almost get the Heart Foundation Tick. I said almost! You can also use non-stick spray like PAM.

Ladle the batter over the pan, spreading it evenly until the frying pan is completely covered as a thin layer. Cook for about 2 minutes until the edges start to lift up, and flip over to cook the other side. Stack them on a plate, spreading a layer of butter generously, between each stacked blinchik.

When you are flipping over the blini on your non-stick frying pan, and you find they are tearing, just add an extra egg to your batter. The batter is very forgiving, if it's too thick, add water, too thin then add a bit of flour. You could use less water and more milk, it's up to you. I'd like to say it's an exact science, but it isn't unless you weigh it all, including the eggs. That's never how it's been done.

If your cholesterol is fine, you can use full cream milk, full fat sour cream, fry in butter, layer tons of butter between the blini stack, and it will taste amazing. For the rest of us, this a slightly healthier version, especially if you eat it with light sour cream. I make my own sour cream, and it's delicious with Blini.

But this a version of the recipe that my mom always made. It's funny because my cousin in Russia makes it almost the exact same way. I call this my low fat blini recipe, but it's not really. I use water in the blini batter, which lowers the amount of fat that you have from regular milk. It's probably different than most blini recipes not the internet which use whole milk, but I promise you, that's not necessary.

I find it has the added benefit of not seemingly burning as quickly in the pan, when compared to when you use only milk. If you are calorie counting, then you need every bit of fat savings, but you don't want to lose out on the taste. I also think that using water also made the batter go further with less milk. My mom came from a family of 13 kids, and if you wanted milk, you didn't buy it, you milked the cow!

How to Serve Blini

There are so many variations when making this amazing peasant meal. You're spoilt for choice as you can serve it so many ways. My favorite way is to slather blini with butter, spread a layer of jam or honey on half of the blin, and spread homemade Smetana or sour cream. Fold the blini in half over the jam and smetana, and again, making an easy to each blini triangle.

You can drizzle honey, squeeze some lemon juice and sprinkle icing sugar on the blini, spread Tvorog or Farmer's Cheese inside. They are also very often stuffed and rolled with various stuffing. So it can get complicated very quickly. 🤣

I call this Blini Recipe lower fat blini. Not sure if that's really possible as I usually cave in and drown it in all things fatty. Nothing beats a fresh blini recipe, smothered in butter sour cream and jam (usually blueberry jam for me). This is a delicious breakfast to make this Saturday morning. Bon Appetit! Приятного аппетита! 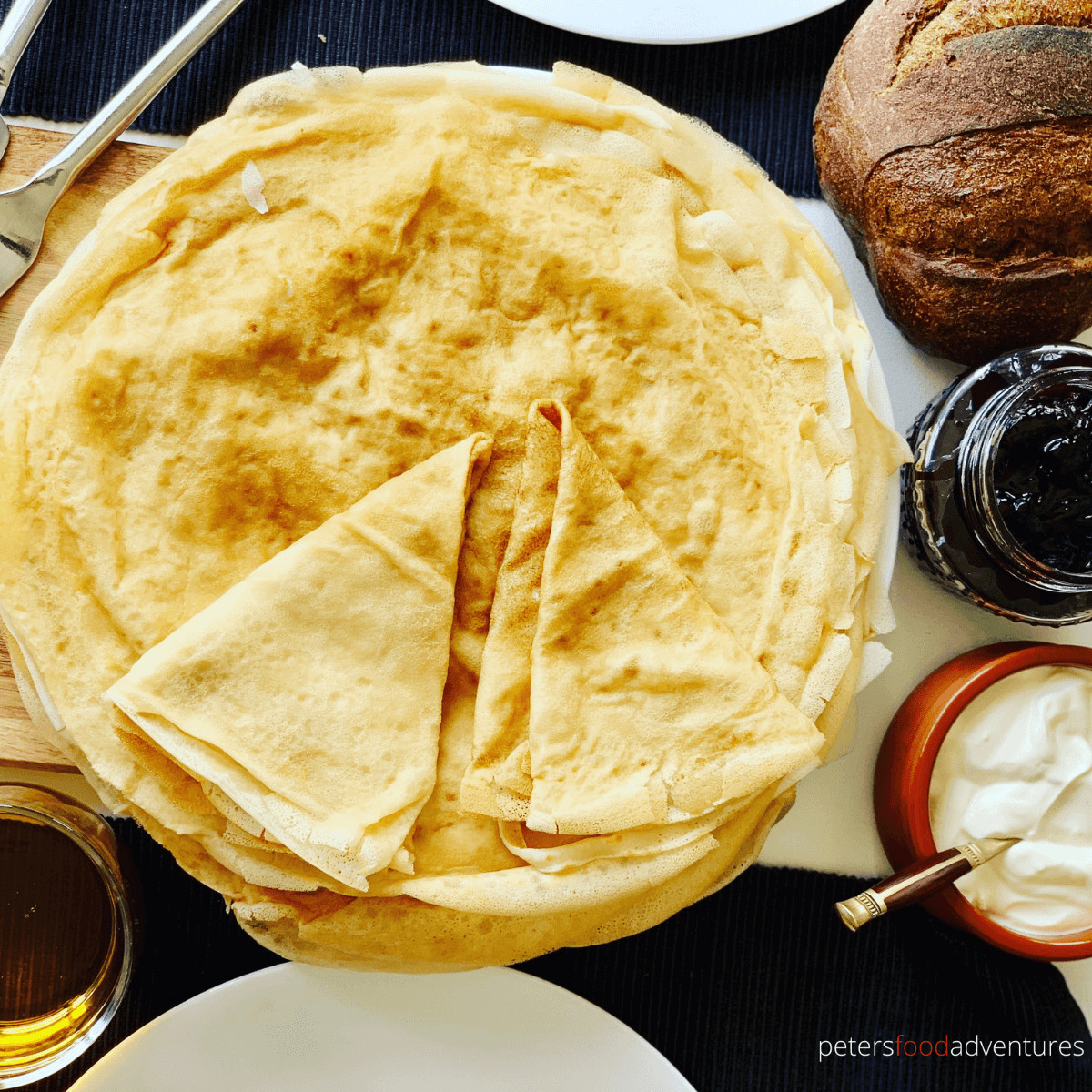 This website uses cookies to improve your experience while you navigate through the website. Out of these cookies, the cookies that are categorized as necessary are stored on your browser as they are essential for the working of basic functionalities of the website. We also use third-party cookies that help us analyze and understand how you use this website. These cookies will be stored in your browser only with your consent. You also have the option to opt-out of these cookies. But opting out of some of these cookies may have an effect on your browsing experience.
Necessary Always Enabled
Necessary cookies are absolutely essential for the website to function properly. This category only includes cookies that ensures basic functionalities and security features of the website. These cookies do not store any personal information.
Non-necessary
Any cookies that may not be particularly necessary for the website to function and is used specifically to collect user personal data via analytics, ads, other embedded contents are termed as non-necessary cookies. It is mandatory to procure user consent prior to running these cookies on your website.
SAVE & ACCEPT
3493 shares