Is there Fish Caviar in this recipe?

Nope! Russian Eggplant Caviar or Baklazhannaya Ikra (Баклажанная икра) is a vegetarian delicious appetizer, or a vegetable spread generously served on a piece of bread. It's made from 100% vegetables,without any fish or fish eggs, and isn't what people think of when they hear the word caviar.

It's kind of hard to screw up this recipe, as there are many variations and creative license. I prefer vegetables that are grated and hand chopped more rustic chunkier texture. Others like to throw it all into the food processor and eat it like a smooth spread or as an eggplant dip. Every babushka has their own recipe, usually dependant what you have growing in your garden. It's ok to use more eggplants and peppers, or carrots to taste. It's not a hard and fast rule. Some recipe will look more red from the tomatoes and carrots you add, other recipes will be paler. You can even 'can' it to preserve it to enjoy in the winter months.

Many cultures have versions of eggplant caviar, and when searching for recipes, people sometimes can confuse these 2 recipes. Baba Ganoush is a Middle Eastern Eggplant Appetizer, which is different from Russian Eggplant Caviar or Baklazhannaya Ikra. Baba Ganoush doesn't have carrots, peppers or tomatoes in the recipe. It sometimes has added tahini, and spices like cumin or coriander. You can buy Baba Ganoush is most grocery stores, however you will need to make this tasty Russian Ikra appetiser at home!

How to Prepare Eggplant

There are different ways to prepare the eggplant when making this recipe. Some people stab the eggplant with a fork and roast the entire thing on 350°C before putting it in the recipe. Eggplant can sometimes be bitter, no one likes a bitter recipe. My recipe dices the eggplant tossed in salt. The salt takes about 30 minutes to draw out any bitter juices, which you can strain before using. I go further and use my hands and squeeze out all the juices. It's important not to skip this step!

How to Eat Eggplant Caviar

Eggplant Caviar is often eaten as part of a Russian table of zakuski. It's a Russian word meaning 'little bites' and is eaten along side many dishes on the table. Foods usually include dill pickles, Russian salads such as Olivye Salad, caviar and salted fish, piroshki, eggs and meats. Zakuski are usually the first course when you have a feast. I love to eat this eggplant spread on a piece of Rye bread, like an open faced sandwich. Try it inside your next sandwich for a flavor kick!

Many cultures around the world have versions of eggplant dips of spreads. The Greeks have Melitzanosalata, as mentioned the Middle East has Baba Ghanoush, and Caviar d'aubergine is popular in Southern France. Russian Eggplant Caviar (Баклажанная икра) is my favorite! In the UK, Eggplants are known as Aubergines, so this would be a Russian Aubergine Caviar.

A classic Russian eggplant spread made from eggplant (aubergines), carrot, peppers and tomatoes, like Baba Ganoush but tastier in my opinion! Perfect on a piece of bread or on a sandwich - Baklazhannaya Ikra or Poor Man's Caviar. Bon Appetit! Приятного аппетита! 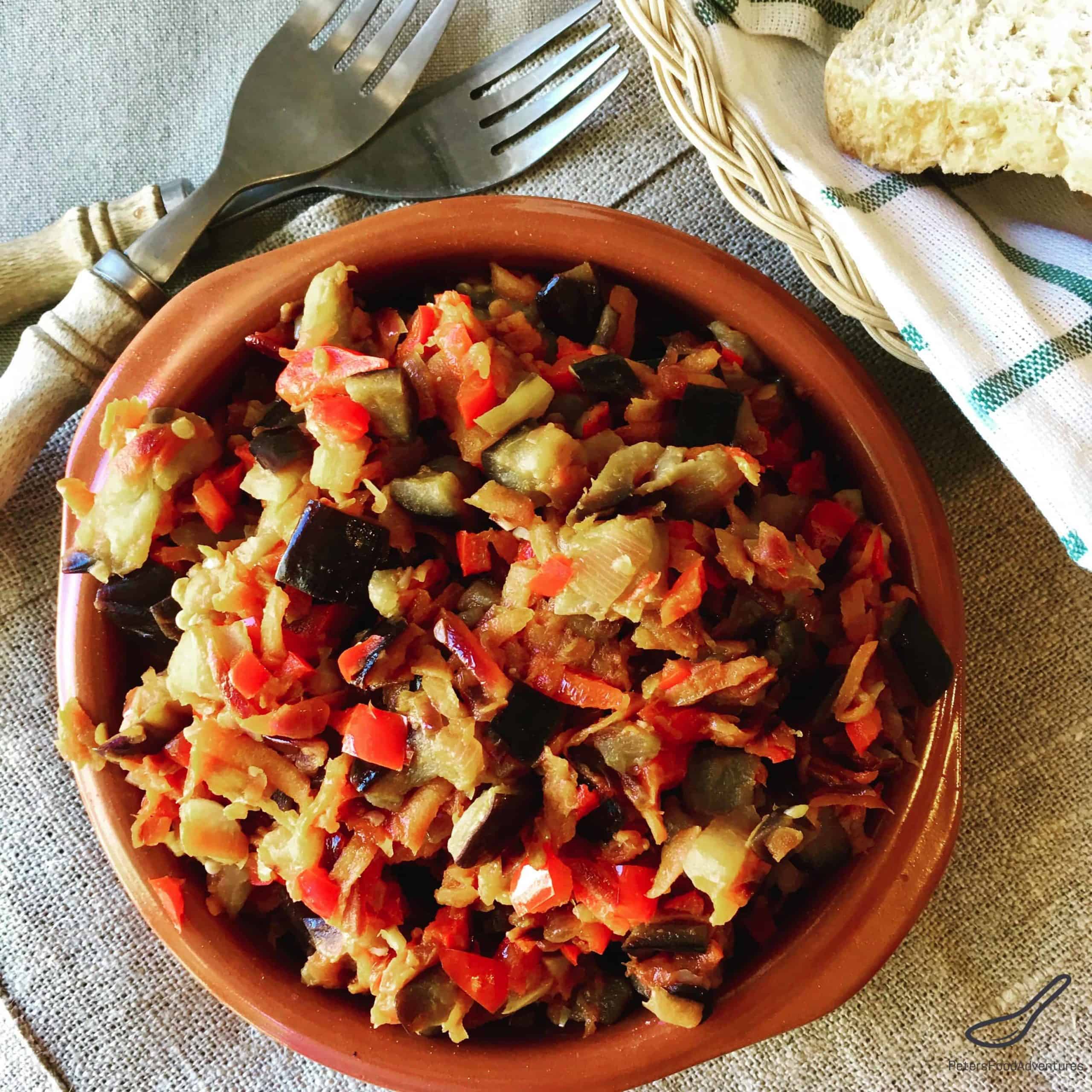 This website uses cookies to improve your experience while you navigate through the website. Out of these cookies, the cookies that are categorized as necessary are stored on your browser as they are essential for the working of basic functionalities of the website. We also use third-party cookies that help us analyze and understand how you use this website. These cookies will be stored in your browser only with your consent. You also have the option to opt-out of these cookies. But opting out of some of these cookies may have an effect on your browsing experience.
Necessary Always Enabled
Necessary cookies are absolutely essential for the website to function properly. This category only includes cookies that ensures basic functionalities and security features of the website. These cookies do not store any personal information.
Non-necessary
Any cookies that may not be particularly necessary for the website to function and is used specifically to collect user personal data via analytics, ads, other embedded contents are termed as non-necessary cookies. It is mandatory to procure user consent prior to running these cookies on your website.
SAVE & ACCEPT
933 shares