It's easy to make Turkey Broth, especially when you have the turkey bones and turkey carcass left over from the holidays. A classic stovetop broth recipe, perfect base for soups, stews and more!

Save your Thanksgiving Turkey

What to do with your leftover turkey bones? You've spent all this time cooking your bird to feed your family, and it's tempting to throw the bones out. Don't! Save your turkey bones and carcass, don't waste any food! It makes a wonderful turkey broth.

Why You'll Love This Recipe

Often and acid is added when making broth. This helps break down the connective tissue, and some say helps nutrients release from the bones. Just a small splash won't make it taste like vinegar.

How to Make Turkey Broth

The hero of this recipe is your Thanksgiving Turkey. After serving, strip as much meat as you can from the turkey. You might want to save this meat for a Turkey Soup you will make later. You're probably too tired to make it on the same day, keep the turkey bones in the fridge until you're ready. Not usually longer than a few days.

Roasted vegetables taste better in your soup broth, but that take more time. Pro tip: Sauté the vegetables in some oil before adding your carcass to the pot. The caramelized veggies also add extra flavor to your soup.

I love using my Instant Pot of make Bone Broth. It's so easy, just throw all the ingredients in the pot! Fill to the MAX line and set to manual for 90-120 minutes. Follow along in my Instant Pot Bone Broth recipe, just substitute the leftover turkey carcass. Instant Pot are excellent for making soup broth because they're faster and really pull out the nutrients.

Can You Freeze Turkey Broth?

It's easy to make this turkey soup stock and pop it into the freezer to enjoy in a few months. I don't recommend freezing it in glass jars, instead use plastic soft drink bottles. It won't crack in the freezers and easily fits, and is easy to defrost to use.

How to Use Turkey Broth

It's so easy to make a delicious broth from leftover holiday turkey. As tempting as it might be to throw out the bones, make this soup base instead! Bon Appetit! Приятного аппетита! 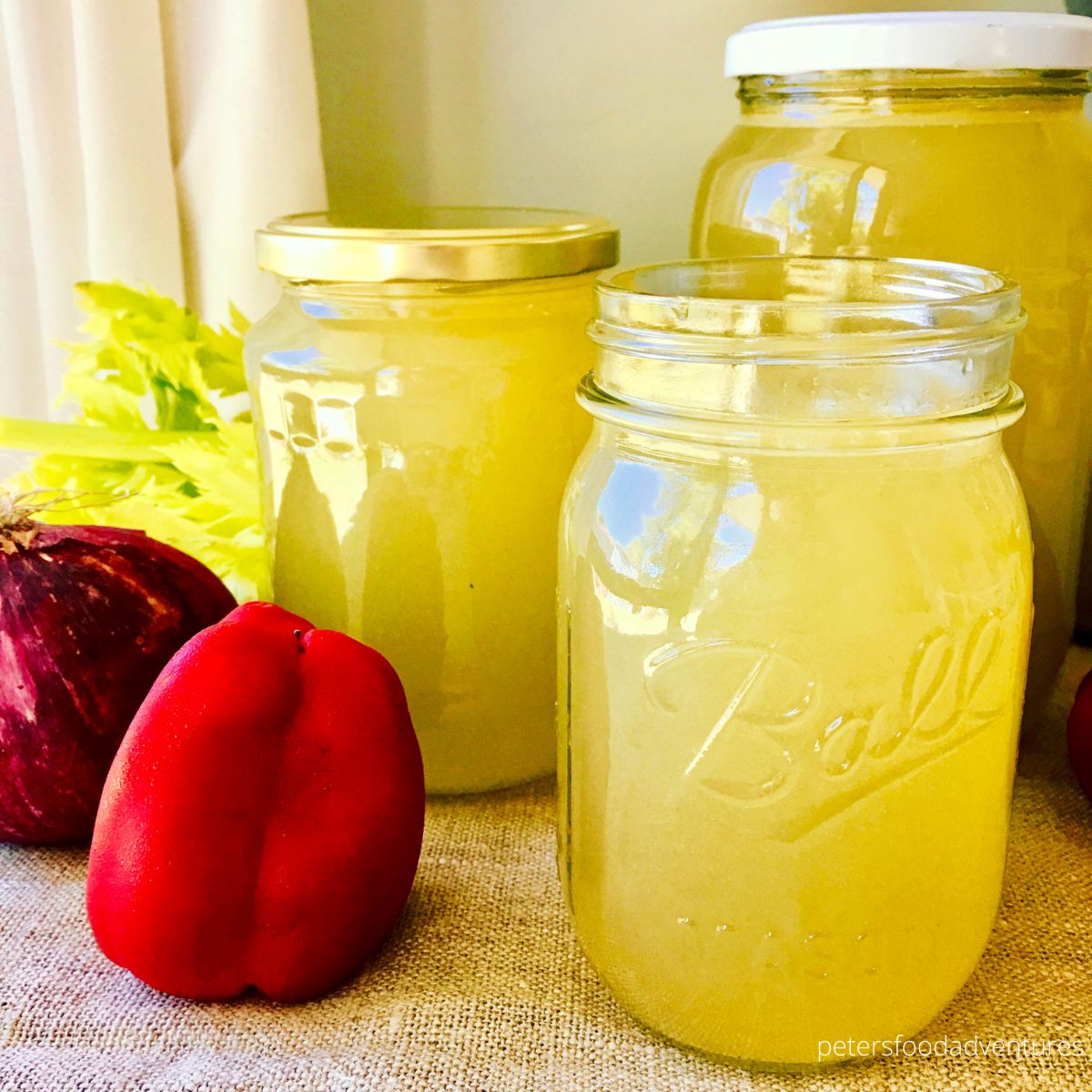 This website uses cookies to improve your experience while you navigate through the website. Out of these cookies, the cookies that are categorized as necessary are stored on your browser as they are essential for the working of basic functionalities of the website. We also use third-party cookies that help us analyze and understand how you use this website. These cookies will be stored in your browser only with your consent. You also have the option to opt-out of these cookies. But opting out of some of these cookies may have an effect on your browsing experience.
Necessary Always Enabled
Necessary cookies are absolutely essential for the website to function properly. This category only includes cookies that ensures basic functionalities and security features of the website. These cookies do not store any personal information.
Non-necessary
Any cookies that may not be particularly necessary for the website to function and is used specifically to collect user personal data via analytics, ads, other embedded contents are termed as non-necessary cookies. It is mandatory to procure user consent prior to running these cookies on your website.
SAVE & ACCEPT
535 shares