Coca Cola ham is is crazy and ingenious way to make your holiday ham this year! It's a fun recipe that's easy to make, and the taste will keep everyone talking for months!

Coca Cola Ham is a holiday classic at our place. Which holiday? All of them! Usually a Christmas Ham, Thanksgiving and an Easter Ham, but this is the way we usually eat ham, any occasion will do!

I first saw this recipe from Nigella Lawson on her TV series Nigella Bites, which is just a variation of an American way of making ham (with clever marketing). I admit I was skeptical at first, Coca-Cola Ham? How does that work? I assure you it doesn't taste at all like Coke, but adds a subtle sweetness to the ham and keeps it nice and moist. Maybe it's just the onion that throws you off the flavor of Coke, but whatever the reason, this is a tasty glazed ham recipe.

How to Cook Coca-Cola Ham

There are many different versions of hams around the world, and they have different ways to prepare them. You might buy cured ham, uncooked ham or cooked ham, depending on where you live. Gammon is an uncooked, cured pork which needs to be fully cooked. American Ham is a cooked, dry cured pork which is ready for eating. When you cook gammon, it becomes ham. However, its commonly called Ham in the US, regardless if it's cooked or not (but most of the time is already cooked).

The ham needs to be cooked in the biggest stock pot you have. This could be problematic if your ham is too big. Most hams here in Australia are sold with a large joint attached. This barely fits in the stockpot, and it's not entirely submerged in the Coke. After cooking the ham for almost 2 hours, I then flip over the joint upside down, add more Coke and cook for another 30 minutes.

Other people buy a Spiral Ham, or a Ham that has the joint cut off, so it fits easily in the pot. I have even used a regular shoulder ham, which was easier to manage in a stock pot. Any ham you use will work great in this recipe. After cooking, you need to glaze and bake the ham.

Nigella uses a glaze with mustard powder and treacle syrup, and it looks beautiful for any dinner table. Scoring the fat of the ham into diamond shapes, allows the glaze to penetrate when it crisps up in the oven. Placing the whole cloves inside each diamond adds extra flavor and looks beautiful to serve.

Treacle Syrup can sometimes be hard to find. Treacle is made from the refining of cane sugar. It's commonly known as Golden Syrup (which is lighter) or as a Black Treacle (which is like Molasses). Molasses has too strong of a flavor for this recipe. To substitute for treacle, mix 50/50 molasses and corn syrup. This will give you something similar to treacle syrup.

What Kind of Sauce is Serve with Ham?

There are many different sauces that can be served with ham. Some people love eating it with a mustard. Some eat it with a creamy Honey Mustard Sauce. Others make a ham gravy or even make a pineapple sauce.

My favorite way to make a Ham sauce is a Spicy Sweet Mustard Sauce. Mix sweetened condensed milk with Hot English mustard, creating a super sweet hot sauce with a mustard kick - the type that wasabi provides. Start with a bit of hot mustard and add more to your personal taste preference. Even my kids enjoy this Sweet and Spicy Ham Sauce.

This sauce is perfect with ham, but don't use regular American mustard, that wouldn't work. It must be Hot English mustard, which works really well with ham. After all, this isn't a hot dog, this is just a variation building on that taste tradition.

Coca-Cola Ham is easy to make, and a fun conversation starter at your dinner table. We don't miss a Christmas, Thanksgiving or Easter without a Coca Cola Ham on our holiday table. Bon Appetit! Приятного аппетита! 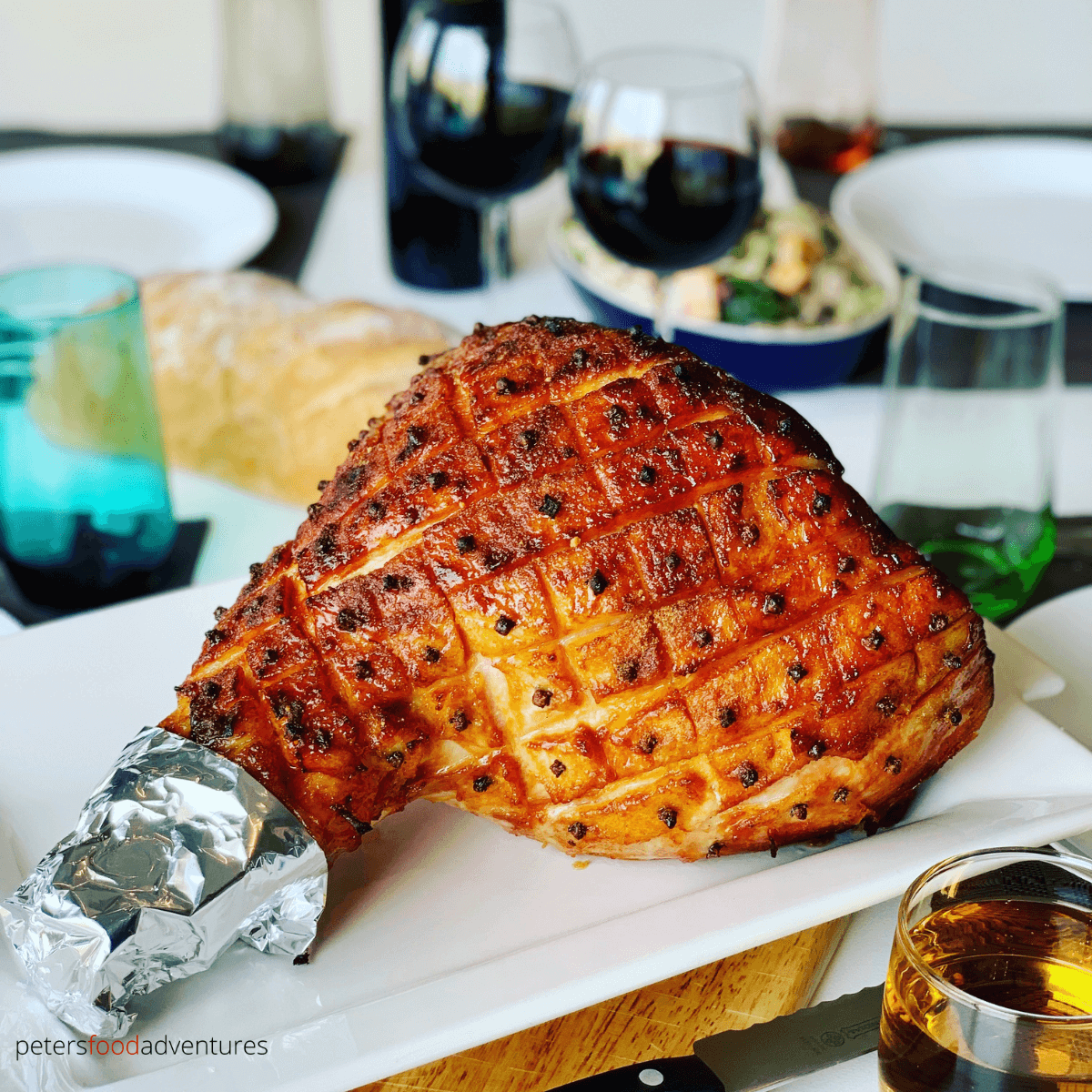 This website uses cookies to improve your experience while you navigate through the website. Out of these cookies, the cookies that are categorized as necessary are stored on your browser as they are essential for the working of basic functionalities of the website. We also use third-party cookies that help us analyze and understand how you use this website. These cookies will be stored in your browser only with your consent. You also have the option to opt-out of these cookies. But opting out of some of these cookies may have an effect on your browsing experience.
Necessary Always Enabled
Necessary cookies are absolutely essential for the website to function properly. This category only includes cookies that ensures basic functionalities and security features of the website. These cookies do not store any personal information.
Non-necessary
Any cookies that may not be particularly necessary for the website to function and is used specifically to collect user personal data via analytics, ads, other embedded contents are termed as non-necessary cookies. It is mandatory to procure user consent prior to running these cookies on your website.
SAVE & ACCEPT
777 shares