This is the best leftover turkey soup recipe that I make. The whole family loves this recipe. I think it's the creaminess that gets them, or maybe its the bacon. Turkey soup can sometimes taste gamey and strong. Adding the bacon and cream compliment and create the perfect balance.

It's not just for after Christmas!

By the time Thanksgiving and Christmas are done, so is my appetite for turkey leftovers! Honestly, I don't always want to continue to eat turkey after the holidays, for days on end! It becomes turkey overload. I make Puff Pastry Turkey Turnovers, and this turkey soup and enjoy this recipe much later in the year.

I always make a turkey carcass soup broth right away. Usually an Instant Pot is too small to fit a whole turkey in, so I make broth in 2 batches from the leftover turkey bones. Check out my Instant Pot Bone Broth recipe. If you don't have an IP, then make broth using an easy Stovetop Turkey Broth, a more traditional way.

When the broth has cooled, I put it into plastic soft drink bottles or plastic containers and freeze them. I shred the leftover turkey meat and freeze it together mixed in the broth. This avoids the freezer burn if you are just freezing the turkey meat by itself. Just defrost and you're ready to make this soup weeks after turkey day!

How to make Leftover Turkey Soup

This is such an easy turkey soup recipe, the key is to make the turkey broth ahead of time. If you don't have turkey broth, just use chicken stock instead. It's so easy to sauté the veggies, throw in your turkey and broth and finish with cream. So easy that it's done in about 30 minutes.

You could easily double the amount of bacon in this recipe, for more of a smokey flavor in the soup. I've tried to use milk instead of whipping cream, but I find it becomes too watery and not creamy enough. Like most of my recipes, they are full flavor, and full cream. This recipe will easily feed 8 people for dinner.

There are just a few easy steps when making leftover turkey soup. Sauce the vegetables and bacon, make the easy butter and flour roux (as a thickener for the soup), add the broth and turkey meat, and finish with cream.

Roux is used as a thickener when making soups and sauces. Usually it requires mixing melted butter and flour, and cooking it for a few minutes before adding liquid (like milk) to thicken up. But this recipe takes a bit of a short cut, which requires less dishes to wash for you!

I make the roux while I sauté all the vegetables and bacon in butter, after they caramelize. Sprinkle the flour over the vegetables until they're all coated. The flour needs to cook for a few minutes, and it will absorb all the butter, so don't skimp on the butter! It works perfectly in this recipe! Not done in the the traditional way, but it works perfectly and is so easy. Then you're ready to add the final ingredients finish your turkey soup.

A tasty recipe to enjoy any time of year, maybe even months later if freezing your broth. Potato and Bacon Leftover Turkey Soup recipe is a winner. A comfort food and the best way to use up turkey leftovers after the holidays. Bon Appetit! Приятного аппетита! 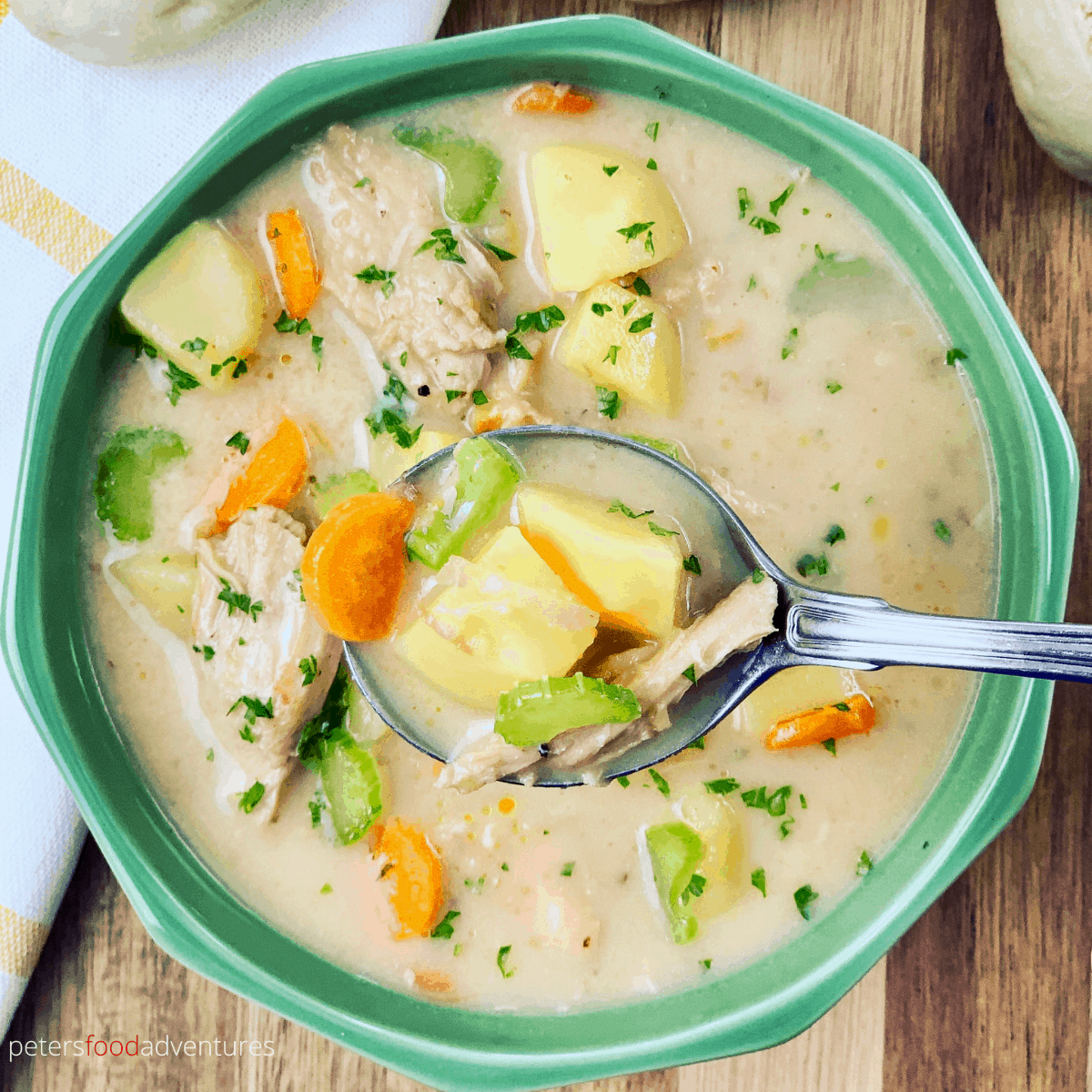 To make turkey carcass soup, just simmer the carcass in a stock pot filled with enough water to cover the turkey. Add an onion, carrot and celery cook for at least an hour. Strain before adding into recipe. If you want the soup thicker, mix 1 tablespoon of cornstarch with 2 tablespoons of water before adding into soup. Allow to cook for 2 more minutes to thicken up.
Tried this recipe?Mention @petersfoodadventures or tag #petersfoodadventures!

This website uses cookies to improve your experience while you navigate through the website. Out of these cookies, the cookies that are categorized as necessary are stored on your browser as they are essential for the working of basic functionalities of the website. We also use third-party cookies that help us analyze and understand how you use this website. These cookies will be stored in your browser only with your consent. You also have the option to opt-out of these cookies. But opting out of some of these cookies may have an effect on your browsing experience.
Necessary Always Enabled
Necessary cookies are absolutely essential for the website to function properly. This category only includes cookies that ensures basic functionalities and security features of the website. These cookies do not store any personal information.
Non-necessary
Any cookies that may not be particularly necessary for the website to function and is used specifically to collect user personal data via analytics, ads, other embedded contents are termed as non-necessary cookies. It is mandatory to procure user consent prior to running these cookies on your website.
SAVE & ACCEPT
299 shares