Everyone loves Bbq Pork Ribs, sweet, smokey, sticky and full of flavour. The process of making ribs is just as important as the barbecue sauce you use. This fast ribs recipe is a time saver, tender and full of flavor.

Not everyone thinks that boiling ribs is a good idea! Who knew making ribs can be controversial? Making ribs this way can freak out rib purists, who believe in low and slow, and no other way. However, not all of us have hours to make ribs, and this is a different way to make ribs from the usual ways.

How to make BBQ Ribs fast!

Some Bbq Pork Ribs recipes use dry rubs, some marinate for hours, some slow cook, some bake and others grill. So many methods, so little time! Time is something we are all short of. My recipe makes boiled ribs in a stock then grills on the barbecue. This speeds up the cooking process, still allowing the ribs to be tender. This is the fastest way to make ribs without a pressure cooker, ensuring they're still tender. Check out my Fall of the Bone Ribs in Oven recipe and video below for the long and slow way to prepare ribs.

I think there are 2 nations that are famous for their bbq ribs. South Africa and the USA. No one else comes close to how delicious their rib recipes are. South Africans love their Braai (bbq) and have developed their own bbq sauces and techniques, different from the American style. South Africans love to use coriander seeds and chutneys in their bbq and cooking. This is my nod to them by adding coriander seeds to the broth. Sometimes I make a South African Monkey Gland Bbq Sauce which I serve with my ribs. It's completely different from what you'd expect from a bbq sauce, and worth checking out.

Americans are famous for their smokey barbecue sauces, rib cook offs and secret recipes. Often American ribs are smoked in smokers, other times they barbecued over low heat over a long time. They are experts are indoor ribs too, form Instant Pot Ribs to Slow Cooker ribs, a millions ways to cook them.

Sometimes I make my own barbecue sauce, but my favorite is Sweet Baby Ray's Barbecue Sauce. They make many varieties of flavours, from sweet to spicy. They do the hard work in making a great bbq sauce, so I don't have to! The perfect accompaniment to bbq ribs.

Don't boil ribs in plain water! It's better to make boiled ribs in chicken stock and onions, so the flavor permeates through the meat. I sauté the onions and garlic, add crushed coriander seeds, and enough chicken stock to cover the ribs. Some people add beer or other spice flavors, your choice! Remember pork is a white meat, which is why chicken stock works well. It's an easy step that adds extra flavor. It's like brine boiling! 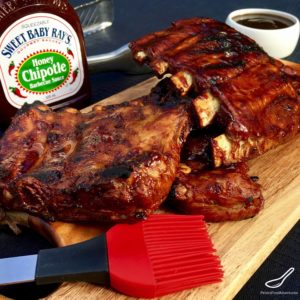 This website uses cookies to improve your experience while you navigate through the website. Out of these cookies, the cookies that are categorized as necessary are stored on your browser as they are essential for the working of basic functionalities of the website. We also use third-party cookies that help us analyze and understand how you use this website. These cookies will be stored in your browser only with your consent. You also have the option to opt-out of these cookies. But opting out of some of these cookies may have an effect on your browsing experience.
Necessary Always Enabled
Necessary cookies are absolutely essential for the website to function properly. This category only includes cookies that ensures basic functionalities and security features of the website. These cookies do not store any personal information.
Non-necessary
Any cookies that may not be particularly necessary for the website to function and is used specifically to collect user personal data via analytics, ads, other embedded contents are termed as non-necessary cookies. It is mandatory to procure user consent prior to running these cookies on your website.
SAVE & ACCEPT
387 shares