You can't get more Australian than enjoying Kangaroo Burgers! Juicy and flavourful, it's the perfect Aussie bbq food, you probably won't even realize it's kangaroo. I made this recipe as a collaboration with Crazy Russian Dad for Thanksgiving, which Australians don't celebrate. Instead of roasting a turkey, I wanted to showcase an Australian food that many people would not have been exposed to in the States.

Can you eat Kangaroo?

Yes of course, it's not illegal if that's what you're wondering. And yes, Australians do eat their national animal, and it's delicious! It just sounds foreign and exotic, to eat a kangaroo. Kangaroo is exported to over 60 nations around the world.

Why is Kangaroo being banned in the USA?

Great question, but probably completely misguided and misunderstood by lawmakers and special interest groups. It's not law yet, but will likely unfortunately pass in the States. While kangaroo is a cute a foreign idea for people, here in Australia, it's as exciting as seeing a duck. Cows are sacred in India, but no one in the USA is banning them, even though they have negative environmental impact, and I say still very delicious, just like kangaroo!

Wild kangaroos are commercially harvested, the males only, which helps keep wild kangaroo populations under control. If not for this method, then the kangaroos would get culled without any sustainable benefit for anyone. When compared to cattle, wild kangaroos don't require extra water or food resources, and don't produce methane. It's considered a great red meat choice because of it's environmental benefits.

It's one of the most environmentally friendly meats you can buy! Plus don't forget how healthy kangaroo meat is! So don't listen to the propaganda about how cute they are, they are also delicious! They aren't at risk of dying out, there are about 30 million of the wild animals around out here, with limited food resources. But enough about that!

Australians do love their meat, but surprisingly, chicken is the most commonly consumed meat here, followed by beef and lamb. In our supermarkets, Chicken and Beef have the largest sections in the butcher, followed by lamb and pork. But every supermarket has a small section that sells kangaroo meat. It's usually kangaroo fillets, kangaroo steaks and ground kangaroo.

Someone once told me that kangaroo was only used for pet food. That isn't true, although I am sure that it is found in pet food here, just like beef products are found in pet foods in other countries. That's not the premium cuts of kangaroo found in our supermarkets. Even though not every Australian has eaten kangaroo, I promise you that it's eaten here because of its health benefits and just because people like it.

Honestly, it tastes most similar to beef or lamb, but with a bit of a more stronger or game-y flavour. And the meat is incredibly lean. As a red meat, it's a great source of iron. Compared to beef, it has double the amount of iron. Kangaroo is considered a very healthy red meat, as it is very low in fat with less than 2% fat! I'd say it's one of the healthiest red meats out there.

How to cook Kangaroo

Kangaroo fillets are commonly sold and cooked like steaks. However, you won't enjoy kangaroo if you like your steak well done. It's recommended to be eaten medium rare. The meat can be quite tough if overcooked. I don't like the meat cooked like a steak and prefer to eat kangaroo in a minced form. In Australia the call it Kangaroo Mince, which is just ground Kangaroo meat.

Which brings me to my preferred way to eat kangaroo, as Kangaroo Burgers. I love eating these burgers because of the way it's prepared. The onion, garlic and parsley add complementary flavor to the meat, and the breadcrumbs make the patty taste lighter. The Worcestershire Sauce isn't added to the meat mixture, but I always shake a few dashes on top of each burger as it is cooking. It makes the meat taste amazing.

The final ingredient I add to the mix is Kefir, a yogurt type of fermented drink that originated in the Russia and the Caucacus regions. It's a staple in every Russian house, and I add it to the burger mix because it makes it burger juicier. I call these my Russian Kangaroo Burgers. 😂 If you don't have kefir, just use some Greek Yogurt.

It's easy to throw these burgers on the barbecue and cook the like regular burgers! Like I mentioned, you might not even notice they taste like kangaroo. Sometimes I make this recipe as a Kangaroo Meatloaf which we baste in bbq sauce. You could even use it for Kangaroo Meatballs. You won't go wrong with this kangaroo recipe.

When making Kangaroo burgers, just dress them like regular burgers. I like using Brioche Burger Buns I buy at Aldi, and of course, I use Russian Ketchup because it's THAT good! The usual suspects apply, like mustard, relish and pickles. You can make a gourmet burger by adding fancy cheese, beet relishes, onion jams or chutneys.

How do Australians Bbq? Easy as! Aussies often go to the beach or a park to have a barbecue for dinner. Our parks have these incredible outdoor gas barbecues that are free to use for the public. You will see in the video me cooking at a local park on the beach by my house. It's one of the amazing things I love about Australian outdoor lifestyle.

I hope you enjoy Kangaroo Burgers as much as I do. Juicy and packed with flavor. If you see some Kangaroo meat in your supermarket, grab it and try this recipe! It will be a great conversation starter, and a way to visit Australia from your dinner table! Bon Appetit! Приятного аппетита! 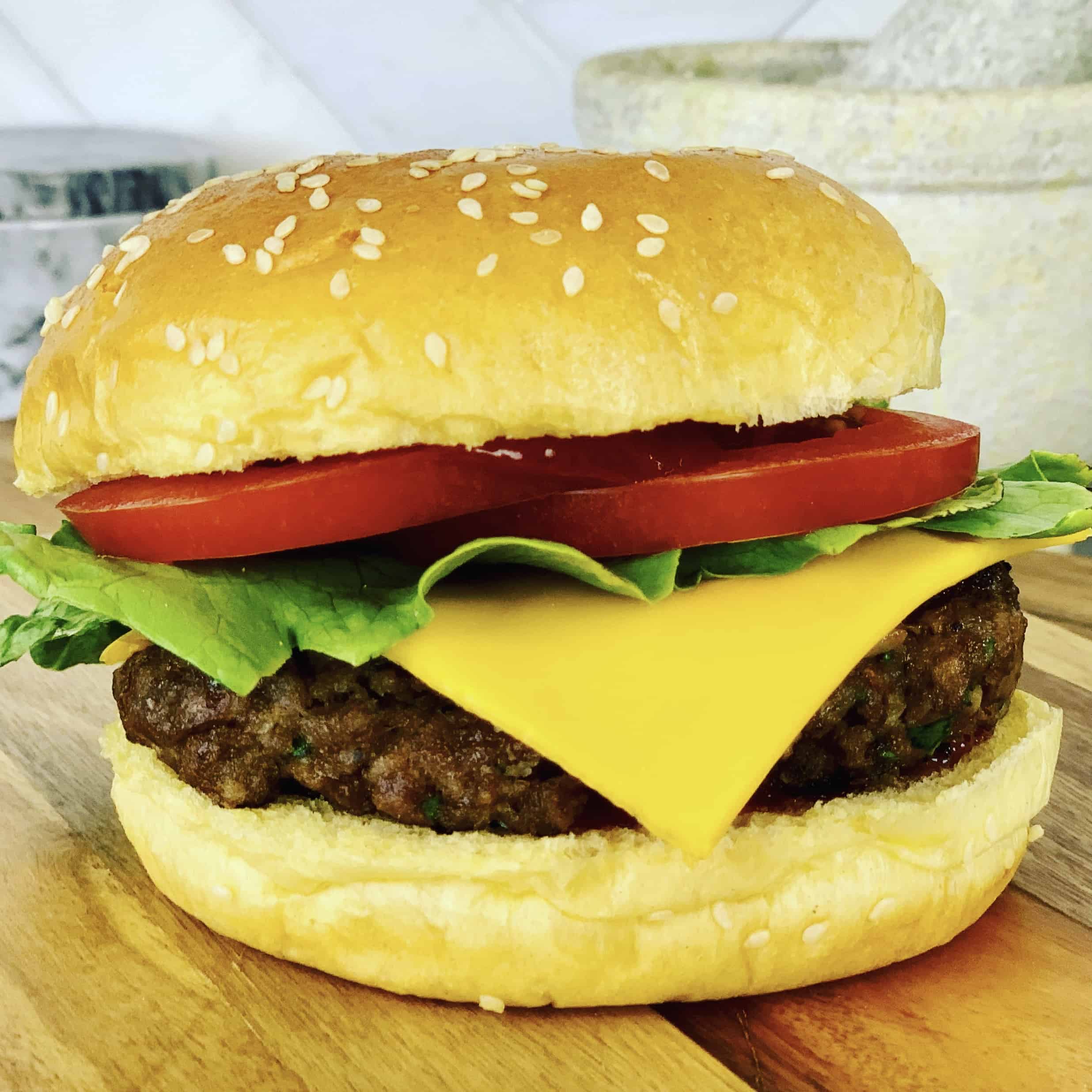 This website uses cookies to improve your experience while you navigate through the website. Out of these cookies, the cookies that are categorized as necessary are stored on your browser as they are essential for the working of basic functionalities of the website. We also use third-party cookies that help us analyze and understand how you use this website. These cookies will be stored in your browser only with your consent. You also have the option to opt-out of these cookies. But opting out of some of these cookies may have an effect on your browsing experience.
Necessary Always Enabled
Necessary cookies are absolutely essential for the website to function properly. This category only includes cookies that ensures basic functionalities and security features of the website. These cookies do not store any personal information.
Non-necessary
Any cookies that may not be particularly necessary for the website to function and is used specifically to collect user personal data via analytics, ads, other embedded contents are termed as non-necessary cookies. It is mandatory to procure user consent prior to running these cookies on your website.
SAVE & ACCEPT
174 shares