How can I even start to explain this Bbq Beef Ribs Asado recipe? Maybe I will start be explaining what Asado style is. Asado is the technique and the social gathering of a South American barbecue. Various different types of meats and sausages are cooked on a grill, usually over hot coals. The grill or barbecue is called a Parilla. Asado food is often served with red wine and salads, such as Olivier Salad known as Ensalada Rusa. Many people think of Argentina when you say you are making Asado.

In Brazil, Asado is known as Churrasco. It's a Brazilian variation of the same thing. Not to confuse it all, but this is different from Philippine Asado which is meat more in a tomato stew. Across South America, there are many different ways of cooking Bbq Beef Ribs - Asado style. Everything from these beef short ribs recipe, to half a cow on a stick beside a bonfire. Some of the best beef bbq I have ever eaten has been in South America, they know their meats!

Asado can be served with Chimichurri Sauce, which is a fresh parsley and garlic sauce, often used as a marinade and a condiment. I'm using it as a condiment in this recipe. It's the perfect way to use up extra parsley in your garden, while adding great fresh flavor to your bbq beef ribs.

Bbq Beef Ribs are best made over hot coals, cooked a little slower, served medium well to well done. This recipe is made without any marinade. That's right. This Bbq Beef Ribs recipe uses only salt, and lots of it. The salt helps draw out the fat, which makes the beef flavorful.

What Cut of Meat is Used in Asado Beef Short Ribs?

If your butcher or supermarket doesn't sell Asado ribs, then you are looking for a flanken-cut beef short ribs as they’re sliced through the bones. This cut provides amazing beef flavor and fatty marbling. You ideally want something cut slightly thicker than what is used for Korean Bbq ribs. Request this from the butcher if possible. These Argentine Short Cut Ribs are called Asado de Tira.

For this recipe, I didn't use hot coals, but my gas bbq instead. It was purely for convenience, and I concede that meat cooked over coals is much tastier than a gas bbq grill. When I make this over hot bbq coals, I try to use a natural wood charcoal instead of the formed briquettes. To me, it tastes more natural to cook them over real wood charcoals.

How to Grill Beef Ribs

After your grill is ready, it's time to prepare the meat. Generously sprinkle the ribs with coarse salt. Sear the ribs on the grill and moved the ribs over indirect heat of the bbq. You don't want these ribs to be cooked fast, as they are a chewier cut of meat due to the muscles and connective tissues. If I had more patience, I would drag it out longer. However it takes me about 20 minutes to complete this Bbq Beef Ribs.

This recipe is always served with a green sauce called Chimichurri Sauce. It's made from parsley, garlic, herbs and spices, and tastes incredible over a bbq steak or asado. Chimichurri Sauce is best prepared the night before to allow the flavors to meld together. Traditionally, it's not marinated in the Chimichurri. You don't want to take away from the flavor of the beef. Some Argentines don't even like the fat dripping into the coals, as the smoke it creates can affect the flavor of the beef. I'm not that fancy, and love the smoked fatty flavors. This is just a simple beef ribs recipe that anyone can make at home. 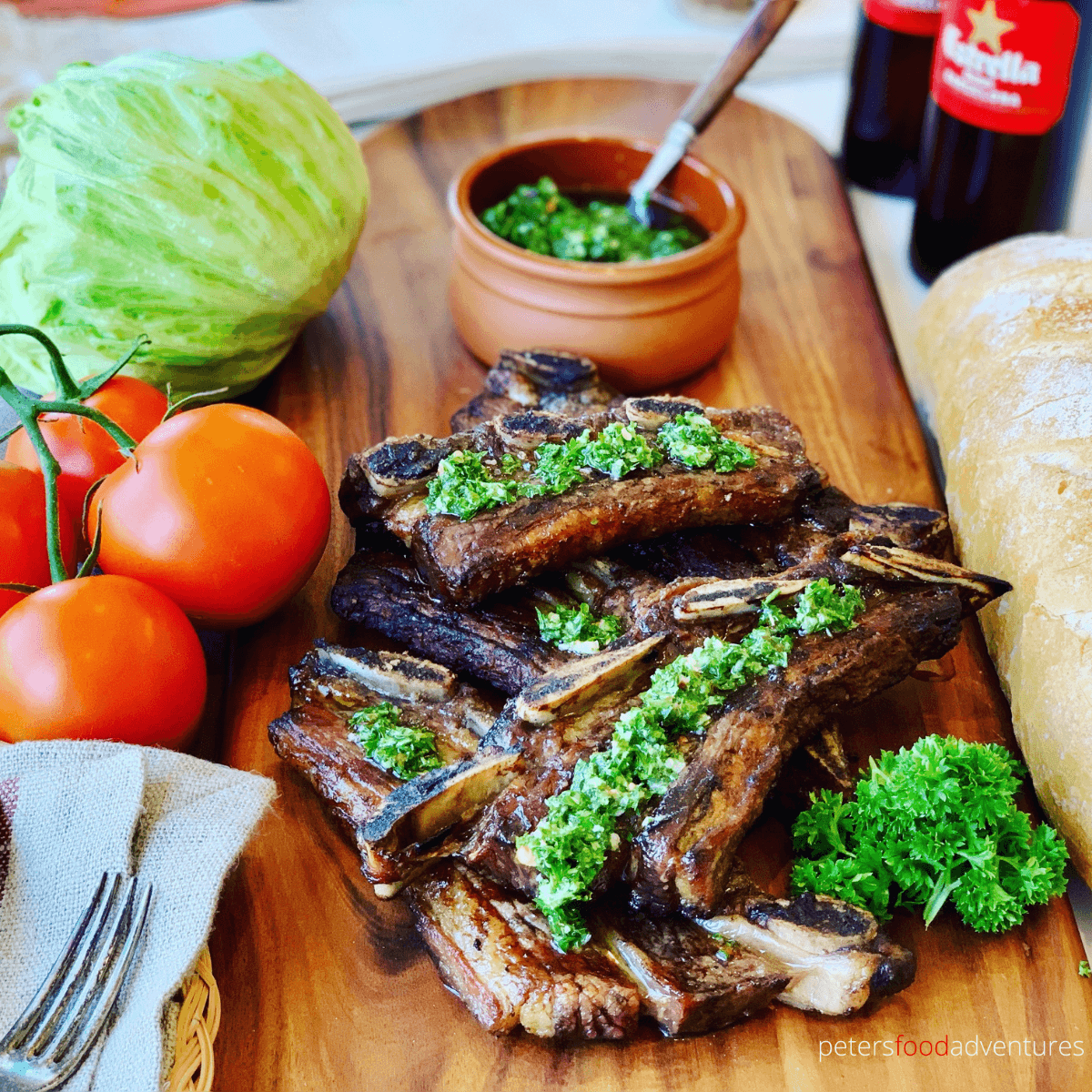 This website uses cookies to improve your experience while you navigate through the website. Out of these cookies, the cookies that are categorized as necessary are stored on your browser as they are essential for the working of basic functionalities of the website. We also use third-party cookies that help us analyze and understand how you use this website. These cookies will be stored in your browser only with your consent. You also have the option to opt-out of these cookies. But opting out of some of these cookies may have an effect on your browsing experience.
Necessary Always Enabled
Necessary cookies are absolutely essential for the website to function properly. This category only includes cookies that ensures basic functionalities and security features of the website. These cookies do not store any personal information.
Non-necessary
Any cookies that may not be particularly necessary for the website to function and is used specifically to collect user personal data via analytics, ads, other embedded contents are termed as non-necessary cookies. It is mandatory to procure user consent prior to running these cookies on your website.
SAVE & ACCEPT
795 shares