Olivier Salad is a traditional Russian Potato Salad that's easy to prepare. A tasty mix of small chopped up pieces, this will be the tastiest potato salad you make. It's crazy good!

Olivier Salad (салат Оливье) is enjoyed at every Russian celebration dinner, especially for Christmas and New Year celebrations. It's pronounced olivyeh in Russian, the R is silent.  Just like many Russian salads like Herring Under a Fur Coat or Vinegret Beet Salad, it takes time to prepare these delicious salads.

You'll find versions of Olivier Salad all over the world. Popular in Eastern European countries, Poland, Spain, Greece, Turkey, Pakistan, Israel, Iran and even in Latin America! It's known as; руска салата, Bramborový Salát, Ensaladilla Rusa, Salada Russa, Rus salatası, Ensalada Rusa. The common thread for most of these names is that it translates as Russian Salad.

Olivier Salad, sometimes spelled Olivye, was made in the 1860's. This Russian Salad was invented in Moscow by Lucien Olivier, but it was made very differently from the modern Olivier of today. The original recipe had crayfish, smoked duck, caviar, and grouse. The original recipe was a guarded secret, and it wasn't a regular staple on the dinner table across Russia, like it is today.

In post revolutionary Russia, the recipe changed to more easily accessible ingredients. The expensive and rare ingredients made way for eggs, green peas, pickles, cucumbers and meat, and lots of mayo.

Traditionally, Olivye has been made with a Russian meat called Doktorskaya Kolbassa. This is just a Soviet version of American Bologna, with arguably better quality meat and a lower fat content than the American meat. I am not a fan or Doktorskaya or Bologna, so we use other meats. You could skip the meat altogether and make vegetarian Olivier.

Usually we make this recipe with baked leftover Christmas Ham, in preparation for the upcoming New Years feast. I always make a Coca-Cola Ham at Xmas and this is a great way to use up leftover ham! Plus I like the meatiness of real meats, when comparing it to processed deli meat. Ham steaks are a good alternative they are easy to cut.

The other way we make Olivye is with Smoked Chicken. You can smoke it yourself, or more commonly, it's easy to buy smoked chicken breast is most supermarkets. It adds a great flavor and texture to your salad.

The hardest part of this recipe is cutting ingredients all the same size. It's a lot of work! Here's a tip! I recently bought an Onion Chopper which works amazing! It's so easy to dice anything perfectly with one quick swoop. The chopper is such a time saver and gives the salad a uniform look required.

This Russian Salad recipe is not just a regular potato salad, but much tastier! It's worth the effort of making for your next special event, potluck or bbq! Bon Appetit! Приятного аппетита! 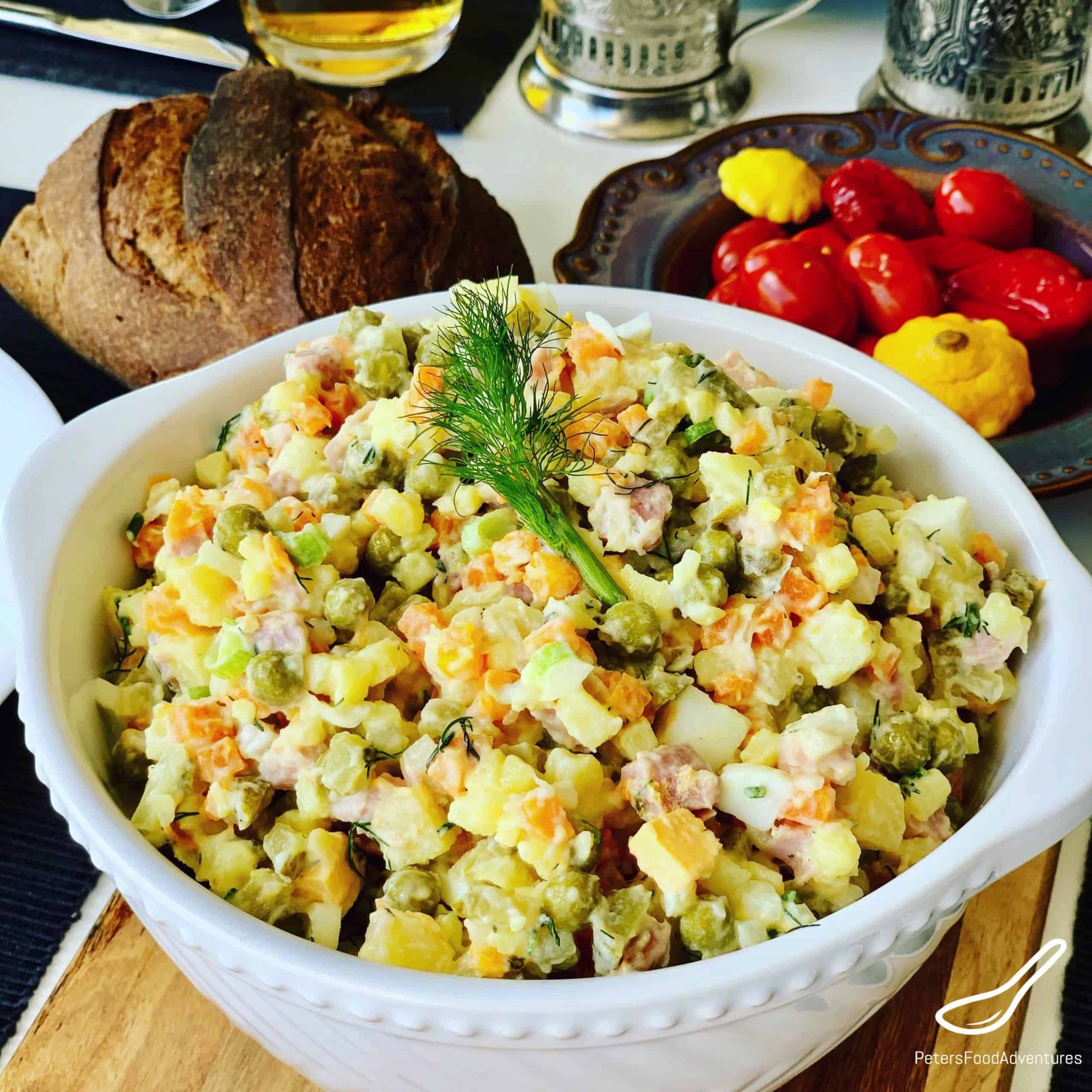 This website uses cookies to improve your experience while you navigate through the website. Out of these cookies, the cookies that are categorized as necessary are stored on your browser as they are essential for the working of basic functionalities of the website. We also use third-party cookies that help us analyze and understand how you use this website. These cookies will be stored in your browser only with your consent. You also have the option to opt-out of these cookies. But opting out of some of these cookies may have an effect on your browsing experience.
Necessary Always Enabled
Necessary cookies are absolutely essential for the website to function properly. This category only includes cookies that ensures basic functionalities and security features of the website. These cookies do not store any personal information.
Non-necessary
Any cookies that may not be particularly necessary for the website to function and is used specifically to collect user personal data via analytics, ads, other embedded contents are termed as non-necessary cookies. It is mandatory to procure user consent prior to running these cookies on your website.
SAVE & ACCEPT
3295 shares