Fish Head Soup is a Russian fishermen's soup, cooked on the river banks where they caught the fish. Called Ukha, a simple and rustic fish soup recipe with potatoes, fresh dill and maybe a tiny bit of vodka.

Ukha Fish Head Soup (Уха) is a rustic Russian Fisherman's Soup that has been eaten for hundreds of years. Traditionally fishermen cook this outdoors in a pot, over an open fire. In the summer, we would go trout fishing and make this soup while camping. While that can be still done today, most of us use an indoor kitchen to make Ukha over a stove.

Growing up, I hated Ukha Fish Head Soup for 2 reasons, the fish heads and the fish bones. My grandpa would even eat the fish head, saying it was the tastiest part. I wanted no part of this meal! I also don't like fish bones in meat, and picking out small bones. This fish head soup was my worst nightmare. Did I mention the fish heads?

Well I call this my new and improved Ukha Fish Head Soup, where you still get the healthy minerals and vitamins from the Salmon bones, without eating the gross stuff. After straining the soup, the fish meat is skinless and boneless leaving chunky fillet chunks of meat that are added towards the end of the soup making process. Leaving a simple, clear and delicious rustic soup.

The USSR published a cookbook called The Book of Tasty and Healthy Food (Книга о вкусной и здоровой пище) which was written by Soviet scientists, first published in 1939 then in 1952 which became a staple in the Soviet kitchen. Sometimes it's referred to as Stalin's cookbook. There was a recipe for Ukha Soup which I will post the original Russian version at the bottom of the post.

What Kind of Fish Do I Use for Fish Head Soup?

When making a fish broth, it doesn't matter what type of fish you use to make your fish head soup. Traditionally this soup was made with river and lake fish, but ocean fish work perfectly. As the fish heads cook, the fish flavors and nutrients create a tasty broth, so no need to discriminate against any fish for the broth.

However, the hero of the dish is the chunks of fish fillets that you use in the soup. In Stalin's cookbook, they recommend using Sturgeon and Perch and specifically prefer river fish, but you can use any fish you like that's meaty. I like using Salmon and Trout, and in the video I used Salmon and Perch.

How to Clarify Fish Broth

Ukha Soup is meant to be a very clear broth, as clear as water, without any impurities or floaties. You want to get it as clear as possible, but most fishermen don't when making this soup on the riverbank. To clarify, I simply strain the broth through a cheesecloth and colander. However, the Book of Tasty and Healthy Food recommends using ground caviar to clarify the broth.

You can also clarify using the egg white method. Beat 2 egg whites until they are white, mix in some cold water, and pour into your boiling broth. Let it sit for about 5 minutes, then strain through a cheesecloth. The floaties in the broth bind to the egg whites, leaving your broth clear.

When Ukha is clarified properly, it is a beautiful looking soup to eat, clear and full of flavor. It's more of a step I would take if serving this for company, not how this soup is usually made. Simply straining the soup using a cheesecloth is a great timesaver for me, and it still looks and tastes great!

If you only use fish heads and tails, the fish broth will look a bit clearer, as the meaty parts of the fish frame will slightly cloud the soup.

Not all fish soup recipes need to be cooked outdoors, over a campfire, using fish heads! There are other ways to make Ukha. Sauté some onions and celery until caramelized, add water and bring to a boil, then throw in the fish pieces, diced potatoes, bay leaf and seasonings. This soup can be ready in about 20 minutes, but it will lack the depth that making a proper fish head broth will bring.

I get it, you don't always have the time to make fancy recipes from scratch. You can cheat and use vegetable broth instead of fish bones, but then it's not really Ukha, but a vegetable soup with fish. There is a difference, experiment and see what you like.

Ok, this is a weird title, but it's a thing! It is completely optional, but throw in a shot of vodka into the Ukha Soup. It might be a bit cliche, think of a Russian fisherman, hanging out with his buddies on a fishing trip, cooking Ukha over a fire, and flavoring it with a bit of Vodka. Maybe it's not that different from an Italian Nonna cooking and adding in Red Wine into the Lasagna Meat Sauce. So it's up to you, to Vodka or not to Vodka?

How to Make Fish Head Soup

First of all, you don't need to make this over a campfire like I did, but it is a great camping recipe, especially if you like fishing. You can make it in the comfort of your home on your stovetop. The fish heads need to simmer for at least 45 minutes, and even longer is ok. You want the cartilage to start breaking down into your broth. When you broth is done, then you need to strain the soup, or at least remove the chunky fish heads and fish frames.

Making the fish soup is the easy part. The potatoes cook faster than the chunky fish pieces. You don't want the fish pieces too small or they will fall apart. Bring the fish stock to a boil, throw in the cubed potatoes (with bay leaves) for about 10 minutes. Then add the fish pieces and cook until for another 10 minutes until it's all cooked. This fish soup recipe loves black pepper, and season with salt to taste. And don't forget the fresh dill!

Fish Recipes You Have to Try!

Some of you didn't know that you can make a Fish Head Soup, and that it would be so healthy and tasty. As we call it, Russian Ukha Fish Head Soup (some people spell it Uha), it's a basic and rustic fisherman's soup recipe. So easy to follow, even a man can make it, (vodka optional). 🤣 Bon Appetit! Приятного аппетита! 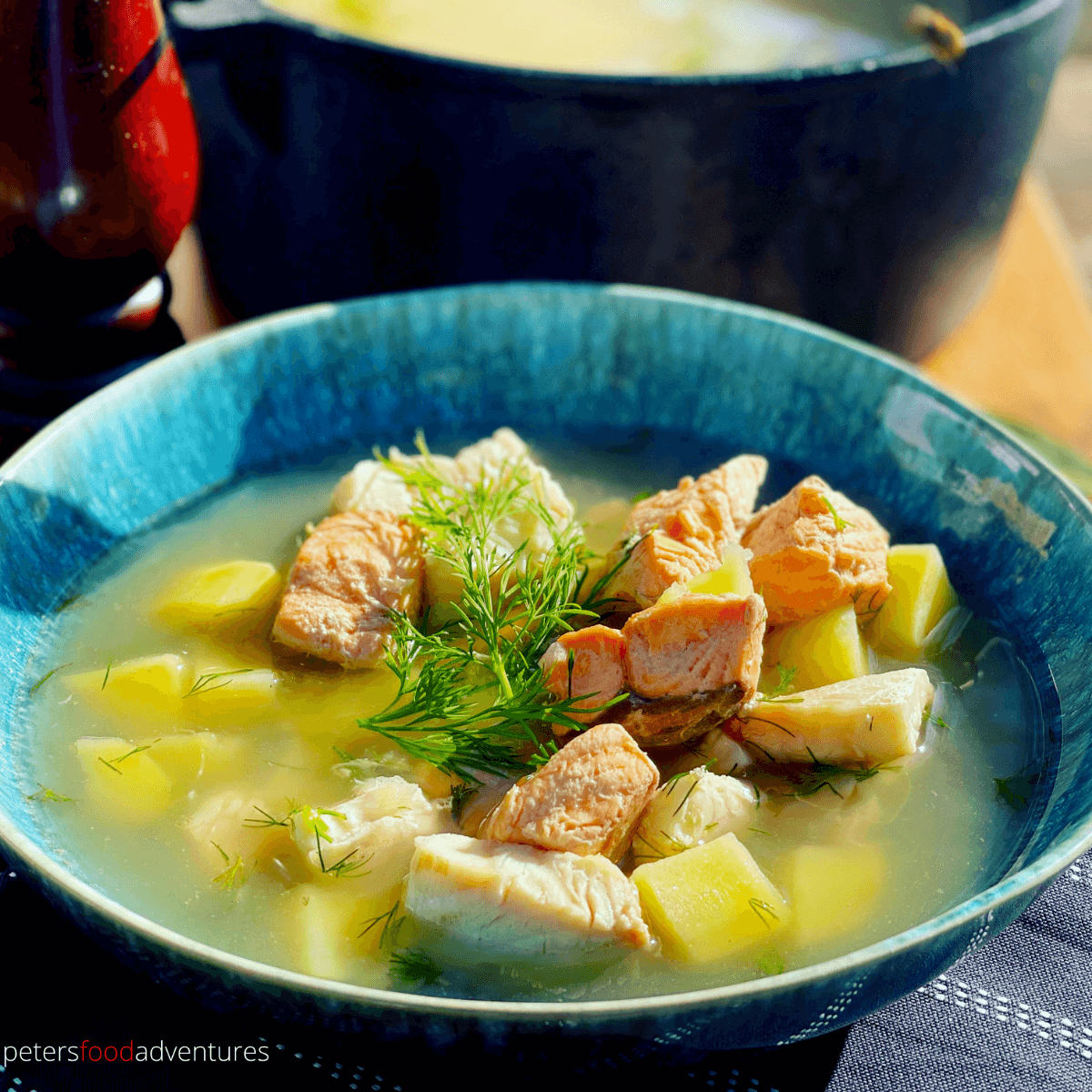 This website uses cookies to improve your experience while you navigate through the website. Out of these cookies, the cookies that are categorized as necessary are stored on your browser as they are essential for the working of basic functionalities of the website. We also use third-party cookies that help us analyze and understand how you use this website. These cookies will be stored in your browser only with your consent. You also have the option to opt-out of these cookies. But opting out of some of these cookies may have an effect on your browsing experience.
Necessary Always Enabled
Necessary cookies are absolutely essential for the website to function properly. This category only includes cookies that ensures basic functionalities and security features of the website. These cookies do not store any personal information.
Non-necessary
Any cookies that may not be particularly necessary for the website to function and is used specifically to collect user personal data via analytics, ads, other embedded contents are termed as non-necessary cookies. It is mandatory to procure user consent prior to running these cookies on your website.
SAVE & ACCEPT
733 shares