Horseradish Vodka or Hrenovuha (Хреновуха) is a popular infused vodka, enjoyed in Russia for centuries. Easy to make, you've got to try this spicy, and sharp infused vodka for medicinal reasons... or not! Just like Pepper Vodka, it's an Eastern European classic!

It's said that Peter the Great recognized the great qualities of Horseradish Vodka. He was the Tsar of all the Russias (the Russian Empire) in the late 1600's. He issued a decree that all farm workers should have 5 quarts of Hrenovuha. This was especially for the hard farm workers and people who worked in the cold. As mentioned, this special vodka builds your appetite, and is great for warming you up from the inside out!

How to Make Horseradish Vodka

This horseradish flavored vodka is basically a savory tincture. That's where the extracts of the horseradish are extracted into the vodka, by infusing it over days or weeks. It can be taken medicinally, or not. 😂 In Russian, we call it a nastoyka (Настойка). You want to use the freshest horseradish root you can find, as it has the strongest bite or flavor.

There are a few different ways to infuse the horseradish into the vodka. I prefer thinly slicing the peeled horseradish and leaving it in the vodka in a cool, dark place for up to a week. Only the vodka and horseradish root. Give it a shake everyday. Strain through a cheesecloth, and mix in a bit of honey to mellow out the bite of the horseradish. Some people also add a bit of lemon juice (optional).

Another way is to mix grate the horseradish, add honey, lemon juice and vodka all at once. Shake to mix and allow to infuse for 5 days. Shake it at least once a day. Strain it through a cheesecloth, and it's ready to serve.

How to Serve Horseradish Vodka

I always joke that this must be medicinal because it builds appetite and warms you up. Plus horseradish is healthy, boosting the immune system and helps fighting infections, taken in moderation. So there is some truth to the medicinal benefits of horseradish, some even say it can help overcome colds. However, that's not always necessarily the case!

Horseradish Vodka can be served cold or room temperature, and in a shot glass. Sometimes it's served before a big Russian meal or feast, as it boosts your appetite. I think it's great as part of a meat platter with sausages, meats and pickled vegetables. It's often served with Holodets (an aspic or meat jelly). Za zdorovye!

Alternatively, people in the western world make it as a base for Bloody Mary's or for Caesar's (if you're from Canada). It's a savory infused vodka tincture, so it's up to you how you want to use it.

You can add many different herbs and spices when making Hrenovuha, it's up to you to experiment. Here are some suggestions, the sky's the limit! Remember that the main ingredient of this recipe is horseradish, so anything you add, keep in moderation not to overpower.

Horseradish Vodka Hrenovuha (Хреновуха) is a tincture you can take medicinally, or just for the great flavor straight up, or part of a cocktail. Homemade infused vodka is easy to make, with unique flavors you can't buy in a store. Bon Appetit! Приятного аппетита! 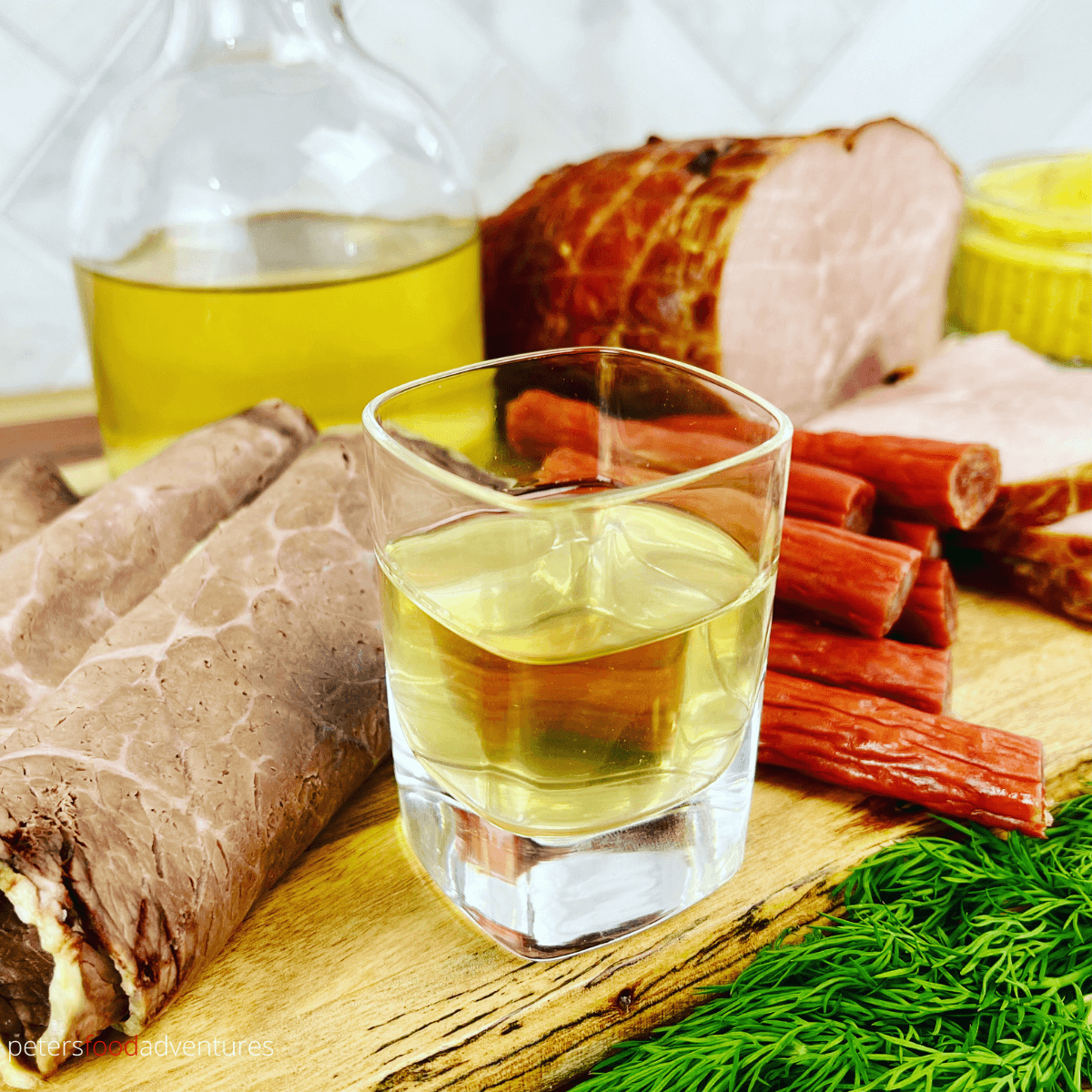 This website uses cookies to improve your experience while you navigate through the website. Out of these cookies, the cookies that are categorized as necessary are stored on your browser as they are essential for the working of basic functionalities of the website. We also use third-party cookies that help us analyze and understand how you use this website. These cookies will be stored in your browser only with your consent. You also have the option to opt-out of these cookies. But opting out of some of these cookies may have an effect on your browsing experience.
Necessary Always Enabled
Necessary cookies are absolutely essential for the website to function properly. This category only includes cookies that ensures basic functionalities and security features of the website. These cookies do not store any personal information.
Non-necessary
Any cookies that may not be particularly necessary for the website to function and is used specifically to collect user personal data via analytics, ads, other embedded contents are termed as non-necessary cookies. It is mandatory to procure user consent prior to running these cookies on your website.
SAVE & ACCEPT
483 shares