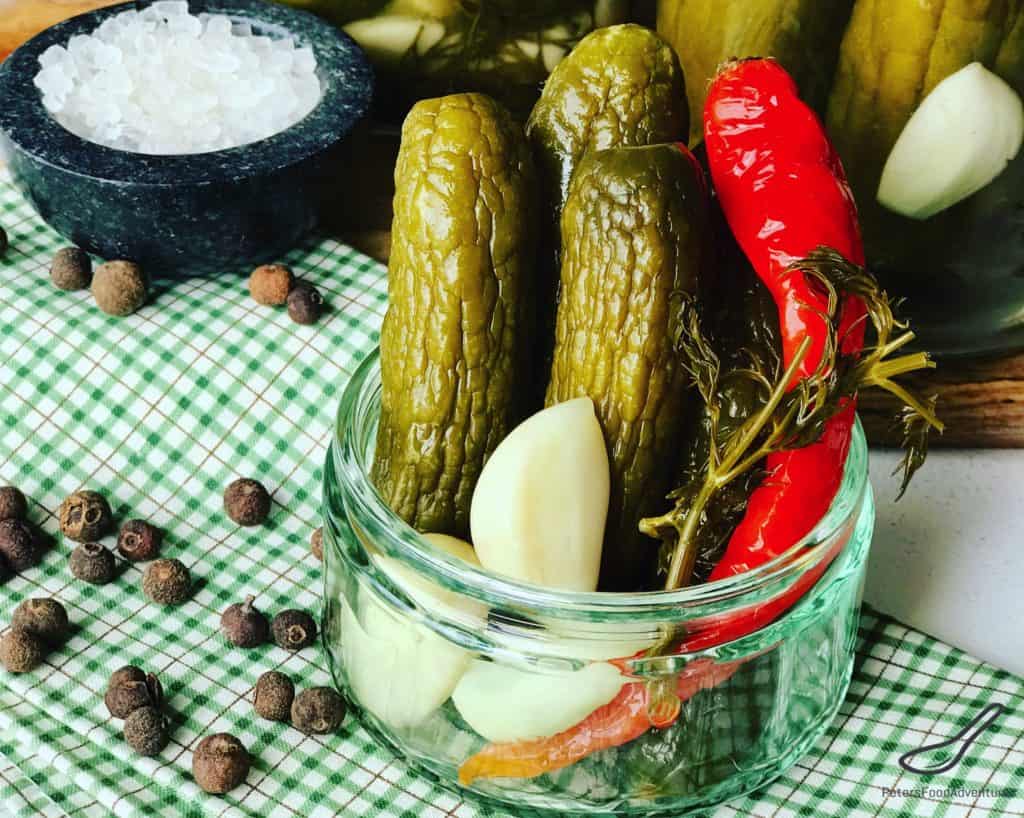 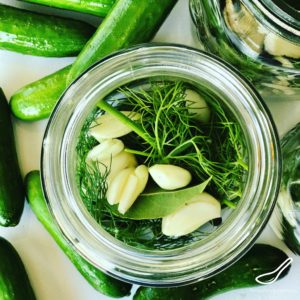 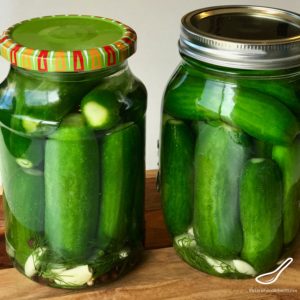 Homemade Dill Pickles are easy to make, and every Russian, Ukrainian and Polish person has their own way to prepare them. Some recipes require fermenting and cellaring, other recipes use canning as a way to preserve. There are even quick refrigerator pickle recipes. Don't get me started on the flavors, everything from sweet and sour to spicy vodka spiked pickles are available.

Growing up, we had a large backyard garden with many fruits and vegetables. Every summer, we would pick the pickles and 'can' them in glass jars to eat during the winter. We had a small cellar in the basement where we kept all our homemade canned pickles and Russian pickled tomatoes. Now I make my own garlic dill pickles with my kids.

These Russian Dill Pickles (солёные огурцы) are a classic pickle recipe. Adding lots of garlic makes the pickles taste even better. I use allspice berries in this recipe, but you can skip this step if you don't have any. Sometimes I add a single hot chili pepper among the pickles for a spicy twist. If you have home grown dill, use the dill crowns in the jar for extra flavor.

Ok, this just sounds weird, but YES! We always put a cherry leaf, or black currant leaf, or horseradish leaf into the homemade dill pickles. My mum always said that it helps keep the pickles crunchy. I never understood why. I've learnt it's the tannins in these leaves that give them a natural crunchiness.

There are a few rules to consider to ensure you canning is safe. The ratio of vinegar and salt in the pickling brine, length of time in the water bath, and using new lids with intact seals. You can re-use the lids, but over time they become less effective and can unseal. After the homemade dill pickles are sealed, check by ensuring the lid doesn't pop up in the centre. If it does, you can still use the pickles but they need to be kept refrigerated.

For proper canning guidelines, please refer to the USDA Canning Pickles Guide. The jars and lids must be clean and sterilized in boiling water for at least 10 minutes before using. When I seal homemade dill pickles in jars, I boil them in a water canner for at least 15 minutes. It's a bit of a process, but it's worth it.

Can You Use Regular Cucumbers for Pickles?

You can use any types of pickles for pickling, but it's best to use Pickling Cucumbers. They will have the right size, shape and texture, especially if you like crunchier pickles. It's hard to find Pickling Cucumbers here in Perth, so for this pickling recipe I used Baby Lebanese Cucumbers. The flavor was amazing, but the structure of the pickle inside was soft. It's best to use Eastern European pickles, which have a thicker skin. Other varieties that work well are Homemade Pickles or National Pickling cucumbers.

My kids help me make Russian Dill Pickles (солёные огурцы). My son did a great job stuffing the jars tightly with cucumbers. The more cucumbers you pack inside the jars, the less pickling brine you will need. Ideally this recipe is for a 3 litre glass jar, or 3 quart sized jars. I suggested 3 pounds of cucumbers as a guide, but depends on how tightly you pack them.

Canning Dill Pickles is the best way to preserve your pickles. A classic Russian pickle recipe with lots of garlic, dill and spices. Home canning is easier than you think. Bon Appetit! Приятного аппетита! 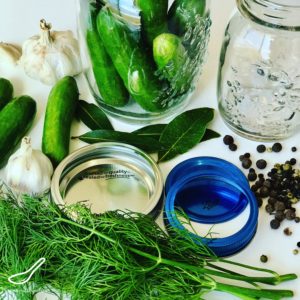 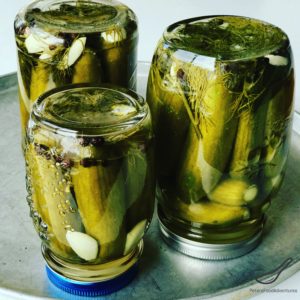 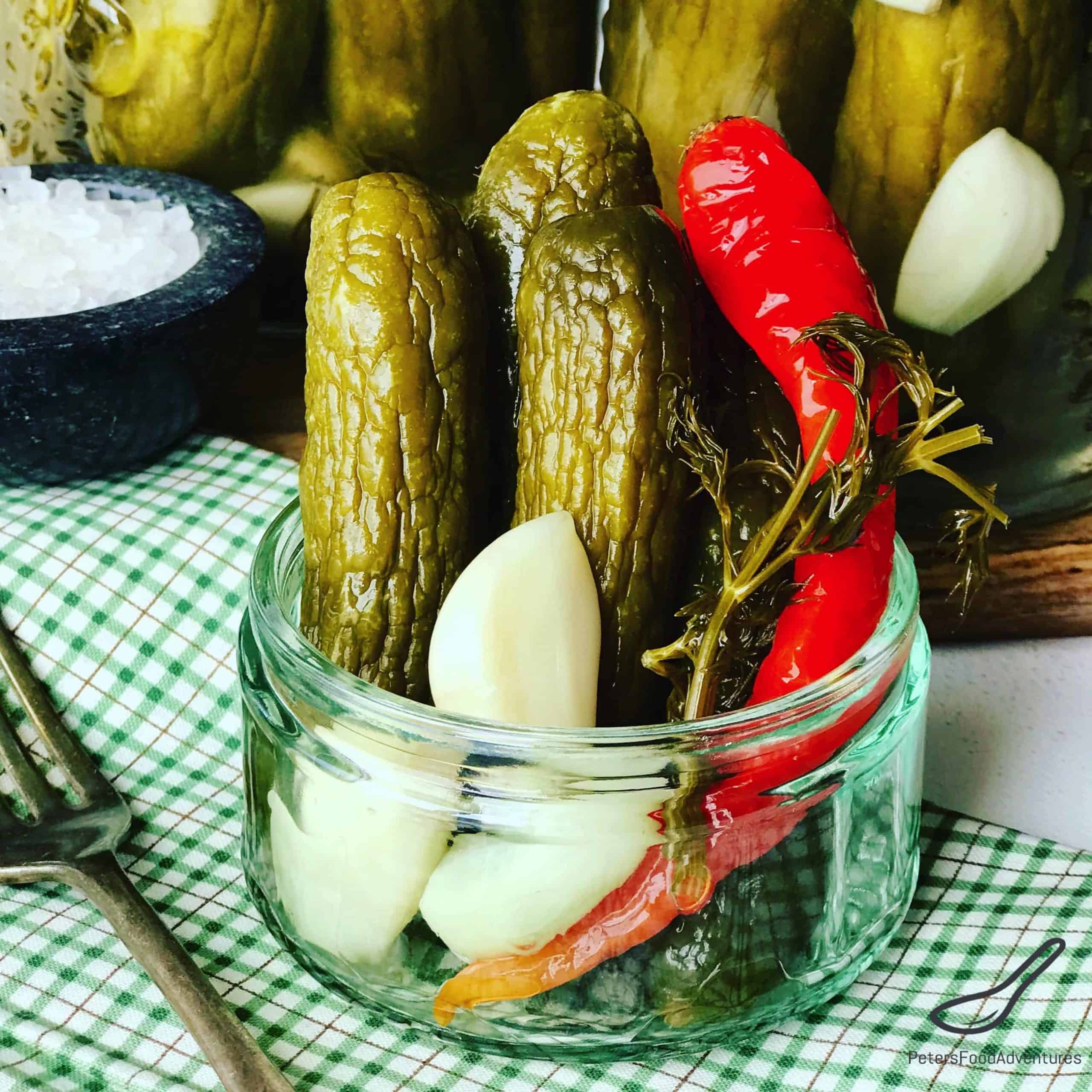 TIP: Use Pickling Salt instead of table salt. There are impurities in regular salt that will make your brine cloudy. Canning can be tricky, if it looks, smells or seems funny, don't risk it but throw it out. If in doubt, throw it out!
Tried this recipe?Mention @petersfoodadventures or tag #petersfoodadventures! 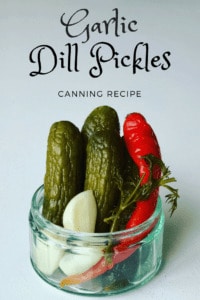 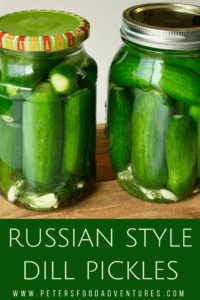 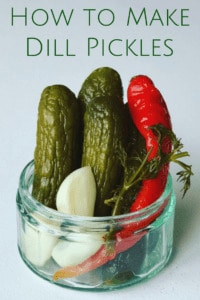 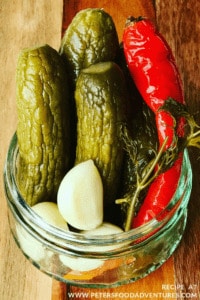 This website uses cookies to improve your experience while you navigate through the website. Out of these cookies, the cookies that are categorized as necessary are stored on your browser as they are essential for the working of basic functionalities of the website. We also use third-party cookies that help us analyze and understand how you use this website. These cookies will be stored in your browser only with your consent. You also have the option to opt-out of these cookies. But opting out of some of these cookies may have an effect on your browsing experience.
Necessary Always Enabled
Necessary cookies are absolutely essential for the website to function properly. This category only includes cookies that ensures basic functionalities and security features of the website. These cookies do not store any personal information.
Non-necessary
Any cookies that may not be particularly necessary for the website to function and is used specifically to collect user personal data via analytics, ads, other embedded contents are termed as non-necessary cookies. It is mandatory to procure user consent prior to running these cookies on your website.
SAVE & ACCEPT
1376 shares