This Funchoza recipe is a type of strange and wonderful salad, that is little known outside of Central Asia. Funchoza is not a traditional salad. it's made with Chinese Vermicelli Noodles, strips of beef, sometimes chicken, and fried vegetables. It's always made in large quantities for celebrations of special events.

Growing up in an ethnic Russian community, I don’t remember a single family gathering, church event, or party without Funchoza. Every Thanksgiving, our church had a huge feast after the church service, where we would feed everyone, buffet style. Funchoza was always a favourite staple on my plate, along with plov, Perogies, Pelmeni Dumplings, golubtsi… 😂

Where is Funchoza From?

In my ignorance, growing up, I didn’t realize Funchoza wasn’t a Russian meal. My parents were born and grew up in Northwestern China. This is home of the Uyghur people who are a Turkic ethnic group who are officially recognised as a minority in China, but with limited autonomy. They are the indigenous people of Eastern Turkestan. This is now part of the state of Xinjiang, China. Many of the ethnic Turkestan foods made up a part of our culinary diet.

This is where my parents were born in the 1930's and 1940's and lived, until China became a communist country. They once again had to flee from the communists, first from Russia, then from China, many finding their way to Shanghai or Hong Kong. My grandfather even fought in a war against the communists in Xinjiang until they lost. There were thousands of stateless Russians who didn't want to return to the Soviet Union. Living in Shanghai in the 1950's, they had lost it all. Eventually these Russian people got accepted to the west via Australia, Paraguay, some earlier via Phillipines, and some settled in Hong Kong.

In many ways, the world had turned their back on these stateless people, many suspicious that they were communist spies instead of unlucky refugees. Few countries in the world extended their assistance. Luckily some churches in Australia had heard of the plight of Christian Russian peoples, stuck in communist China, and took action to privately sponsor out these people.

This journey forms part of the rich tapestry of the amazing foods that we enjoy today, so back to my Funchoza recipe. It’s an Uyghur dish, not a Korean, Chinese or Russian dish, although eaten commonly in Central Asia, including Russia (which makes up a huge portion of Asia). Some people confuse it with Japchae, it's not. I’ve made a different version which is so delicious, Asian Noodle Salad with Chicken and Shrimp, as we are pretty shrimp crazy here in Australia. These two recipes are similar, but have different flavors.

How to Make Funchoza

Firstly, you need bean vermicelli to be boiled in hot water for a few minutes. Strain and cut them into strips with kitchen scissors. These noodles are a long mess, so cutting them makes it easier to eat.

My mom always fried the vegetables separately. She says this gives you a better flavor and caramelization. Frying them all together at the same time dilutes the caramelization. Plus they cook for different lengths of time.

Don’t be afraid of the amount of oil you will be using in this recipe. Oil adds amazing flavour, and it will balance out when you add the vinegar. Remember, it’s a salad (oil and vinegar). The thinner you can slice and julienne the vegetables, the better. This Funchoza recipe was all cut by hand and is a bit thicker, but you can use a mandolin slicer or chopper for a thin cut. Fry the carrots really well, as this adds great flavour.

I love this Funchoza salad, it’s too bad it’s not easily available in stores, but they probably wouldn’t make it as tasty as this Funchoza recipe. Bon Appetit! Приятного аппетита! 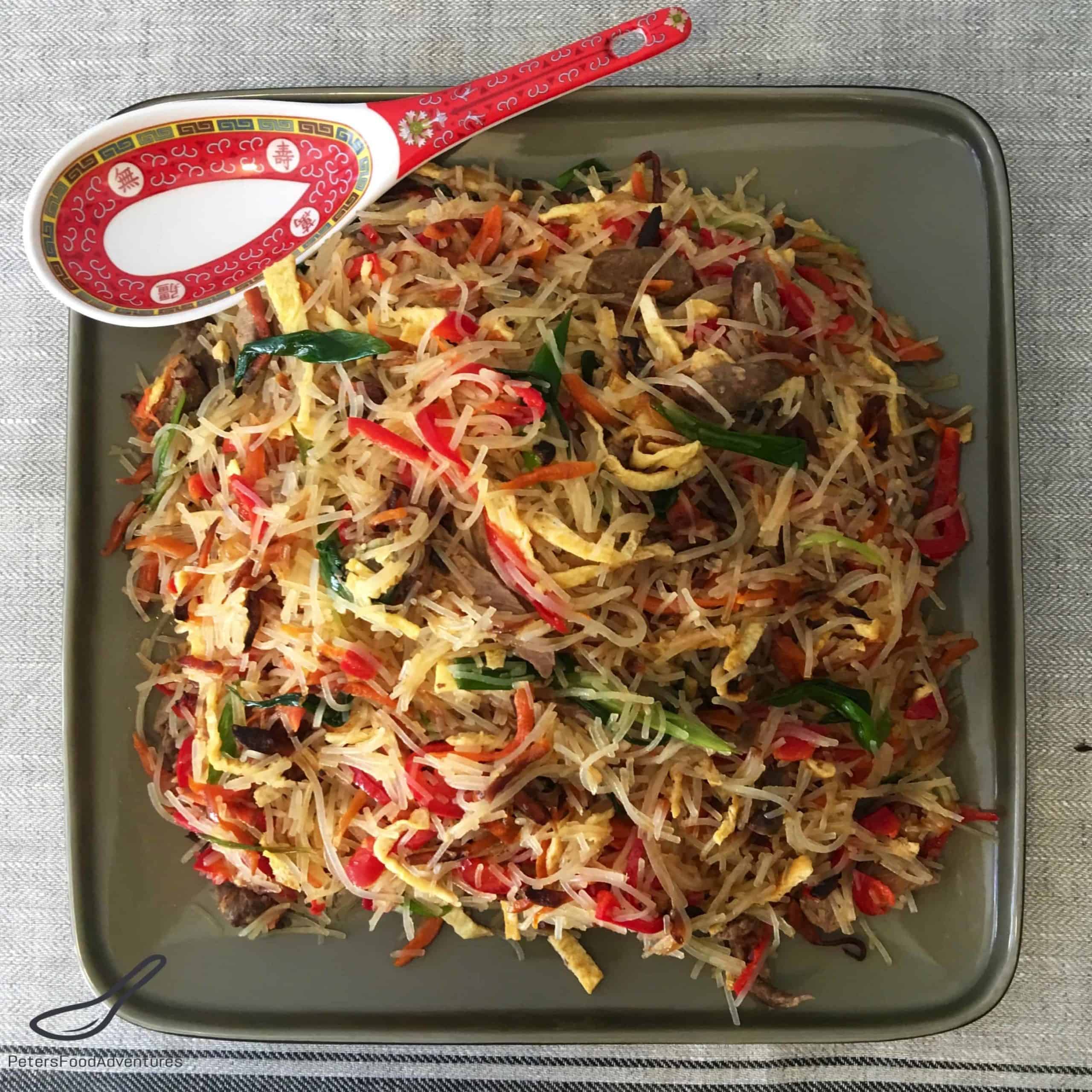 This website uses cookies to improve your experience while you navigate through the website. Out of these cookies, the cookies that are categorized as necessary are stored on your browser as they are essential for the working of basic functionalities of the website. We also use third-party cookies that help us analyze and understand how you use this website. These cookies will be stored in your browser only with your consent. You also have the option to opt-out of these cookies. But opting out of some of these cookies may have an effect on your browsing experience.
Necessary Always Enabled
Necessary cookies are absolutely essential for the website to function properly. This category only includes cookies that ensures basic functionalities and security features of the website. These cookies do not store any personal information.
Non-necessary
Any cookies that may not be particularly necessary for the website to function and is used specifically to collect user personal data via analytics, ads, other embedded contents are termed as non-necessary cookies. It is mandatory to procure user consent prior to running these cookies on your website.
SAVE & ACCEPT
280 shares