This Steamed Dumplings Recipe (Манты) is one of the many recipes that reminds me of my childhood. It's really fun creating a website of my favourite recipes that we eat. I just love all this food, and Manti are no exception. Manti are very common in Central Asia/Eurasia from China, Russia, the Stany countries (Kazakstan, Uzbekistan, Kyrgyzstan...) and all the way across post Soviet countries.

Are Manti Russian? No. I call these Russian Manti because when you search on google, you usually find the Turkish recipe. If you're Slavic, you might be looking for this Central Asian Manti recipe, which is popular in Russia. Manti are a recipe that you prepare ahead of time, and place into the freezer for an easy meal later. Not much different than preparing Pelmeni or Vareniki.

Where did Manti originate?

I believe they originated with the Uyghur people, and spread over many cultures via the Silk Road across Central Asia. My parents were born in the Uyghur region of Northern China, as my grandparents had fled the USSR to this remote area of China. This is the food we grew up eating.

There are many variatons of Manti, with many different names. In Mongolia, they are called buuz, in Siberia, they have a version called pozi (позы), Chinese have mantau and jiaozi, Koreans have mandu, Tibetans have momo, Japanese have gyoza, even the Saudis and Afghans have mantu. The Turkish manti are quite small and can be baked instead of steamed.

The Uyghur people were situated along the Silk Road, and that's how it's thought to have spread across the region and beyond. Manti are usually made with lamb or beef, but we grew up eating a Kazakh/Uzbek version which incorporates pumpkin into the mixture. Some people search of the recipe for Uzbek Manti.

How to Cook Manti?

Manti are steamed in a multi level steamer called a mantavarka. They usually sell the steamers in Asian shops. I'm lucky that I came across several steamer disks that fit over my large stock pot, which works great. The reason you need a multi-level steamer is because you need to feed more people than will fit in a single steamer. Manti aren't boiled but need to be steamed.

I love this version of Manti, as it's very juicy with the pumpkin (or squash), and has a great flavor. There is also Manti made with only ground beef and onion, but pumpkin is tastier in my opinion! You want to use a sweet pumpkin for Manti, the sweeter the better. My mum went digging through the pile of pumpkins in the store to find the sweetest pumpkin. I have no idea how she knew, but the pumpkin we used was perfect. It's best to finely chop the pumpkin into tiny pieces, but that takes so long. We just used a food processor, but don't turn them into mush, leave some chunky small pieces.

The pumpkin to meat ratio should be about 50:50 at most, if you want to play with the recipe portions. Manti are very juicy when you bite into them, and are usually eaten by hand, which can be messy. Usually I just pierce them with a fork, and dip into my sauces. There is a version of manti that is made only with pumpkin, without meat. Quite often they're made with ground lamb, but I always stick with beef. You can decide what you like better.

How to Make Manti

Like all dumpling recipes, you start with the dumpling dough. It's a simple dough recipe, but it needs at least an hour to rest after kneading properly. You can roll out the dough by hand, but I use a pasta maker attachment on my KitchenAid. It makes it easier get the dough to the right thickness, with less effort.

When the dough is rolled, you need a larger 4" diameter circle cutter. That sounds weird, but we usually use a large can, or in this case a Cadbury Hot Chocolate can. Cut the circles with the can, and any extra dough cut offs get re-used and re-rolled again. Keep the dough you aren't using covered with cling wrap so it doesn't dry up.

Spoon in a generous tablespoon of pumpkin and beef mix in the centre of the Mant, taking care that the mix doesn't touch the sides of the dough. If it does, then the dough will not pinch shut, because it won't stick. Place the finished Manti lined up on a tray, and place in a freezer until they are individually frozen. Remove from tray and place into a Ziploc bag in the freezer until you are ready to make them for dinner!

Using the steamer, they take about 30-40 minutes to cook, until the meat inside is ready. Don't defrost the Manti, just place them frozen on the steamer tray. I spray the tray with cooking spray first. The size of the Manti and how much meat you put inside will determine the cooking time. How do you know they're ready? Take one out of the steamer, cut it in half to check that the meat isn't pink and is fully cooked.

Yes, that is true. Not all Manti have the same shape like dumplings. These came in different shapes and sizes. I have 2 favorite styles that we use. We always grew up eating the centre pinch Manti, as pictured in the main photo. Put about a tablespoon of meat mixture into the circle piece of dough, careful for the meat not to touch the sides of the dough or it won't stick shut. Pinch and close the opposite sides of the dough together (corner to corner) until you have a little pinched dough pocket. It's kind of similar to making Piroshki.

There is yet more ways to fold Manti, as if this wasn't enough! This last method doesn't use circles as the dough, but squares. If you roll out the dough by hand, cut it uniformly into about 4" squares. Put about a tablespoon of meat mixture into the square piece of dough, careful not to touch the sides of the dough or it won't stick shut. Pinch 2 opposite corners together at the centre, and again with the other corners, all meeting at the middle. Seal to pinch the dough shut. it will look a bit like a pyramid Manti. To complete the shape, just pinch together 2 corners of the dumpling, which will make a shape of a circle on the outer edge of the Manti. Repeat on the other side. It's kind of hard to explain, so I will have to add a video to share with you guys.

The whole family can help make the manti, everyone gathered around the table, pinching the pillows of dough. They come in many different shapes, from star shapes, fancy roses shaped, oval, square, round, and all look different depending on how you pinch them shut.

There are many ways to sauce up manti. The common Russian way is to eat with smetana or sour cream. I like to eat them with Lazadzhan, an Uyghur hot sauce, or with chilli and black vinegar. When we were kids, we always ate them with ketchup and soy sauce. You can also eat them with a drizzle of this tasty garlic yogurt sauce.

It's a big task to make any dumplings. Plan ahead and get help making them. Make big batches to freeze, placing into Ziploc bags, ready to pull out for a quick and easy meal. Sometimes we spend all day making Manti and Pelmeni to stock up our freezer.

The kids keep asking, can we eat manti today? But I'm still slowly rationing until we can make more. Bon Appetit! Приятного аппетита! 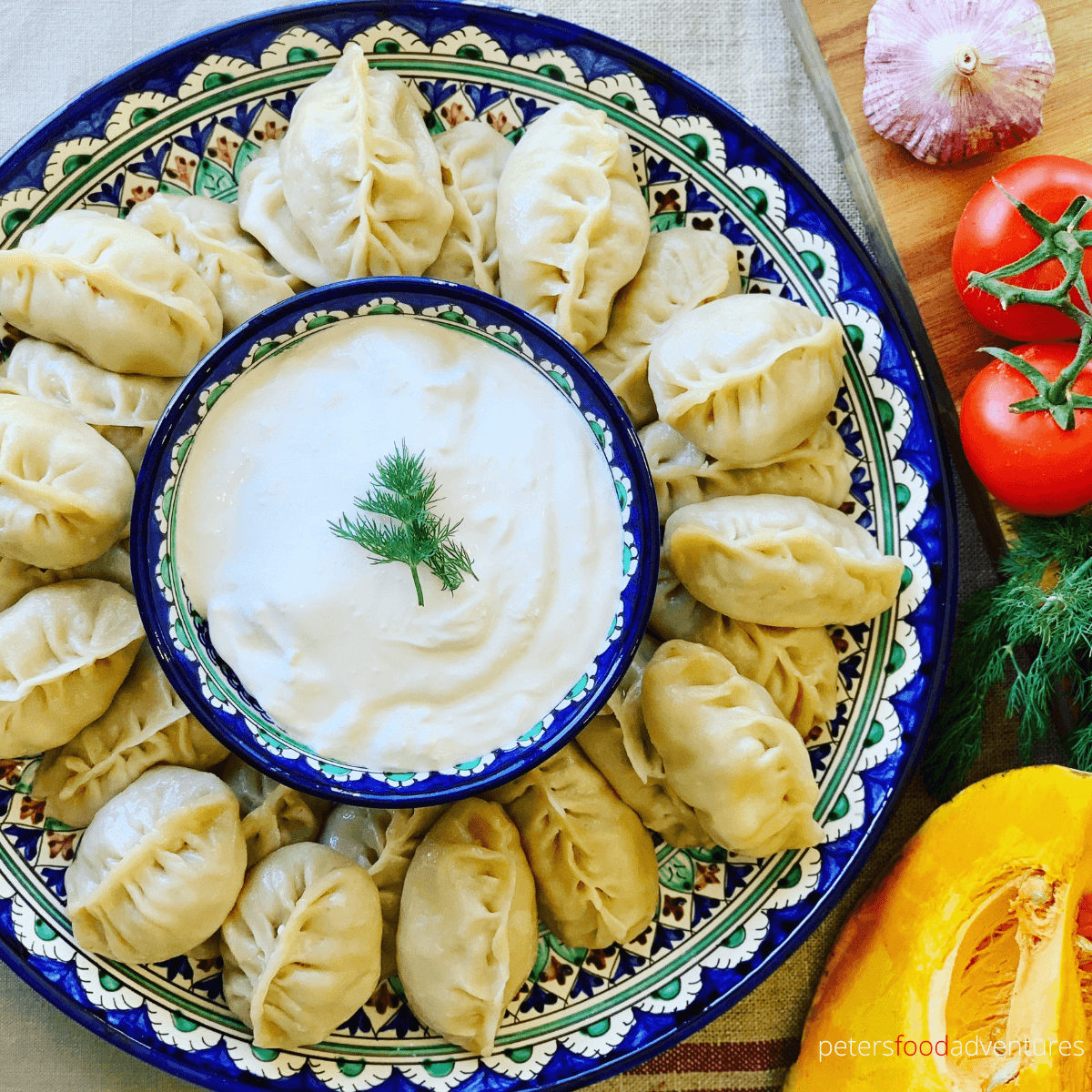 This website uses cookies to improve your experience while you navigate through the website. Out of these cookies, the cookies that are categorized as necessary are stored on your browser as they are essential for the working of basic functionalities of the website. We also use third-party cookies that help us analyze and understand how you use this website. These cookies will be stored in your browser only with your consent. You also have the option to opt-out of these cookies. But opting out of some of these cookies may have an effect on your browsing experience.
Necessary Always Enabled
Necessary cookies are absolutely essential for the website to function properly. This category only includes cookies that ensures basic functionalities and security features of the website. These cookies do not store any personal information.
Non-necessary
Any cookies that may not be particularly necessary for the website to function and is used specifically to collect user personal data via analytics, ads, other embedded contents are termed as non-necessary cookies. It is mandatory to procure user consent prior to running these cookies on your website.
SAVE & ACCEPT
1467 shares