What is Chak Chak (Çäkçäk)?

Chak Chak (Чак-чак) - Fried Honey Cake with Almonds is a sticky and sweet dessert that's absolutely delicious. During the time of the Soviet Union, the national dishes of the many cultures (including Tatar food) formed the foods of the Soviet people. This is different from Russian food. People often confuse Soviet food as Russian food. Soviet food forms the food from the cultures of Greater Russia and across Central Asia. Similar to European Food vs German food.

There are many wonderful dishes that were introduced across the Soviet States, and that have become staples across the republics. I bet most people have never heard of Tatarstan, or their dessert cake which is considered to be their national dish. Tatarstan is a republic located within Russia, about 800 km east of Moscow.

We grew up eating Чак-чак or Çäkçäk, but we called it something simpler - Gorka - which literally means little mountain. Chak-Chak is commonly piled high in the shape of a pyramid or a little mountain, or sometimes in small round balls, or in squares when it is mass produced and store-bought.

Is there alcohol in Chak-Chak?

Yes! It's up to you to decide what to use. You can use either cognac or vodka for this recipe. If you don't have cognac, brandy is the same thing. If you want to get fancy, use Armenian Cognac! Using alcohol in the recipe helps the fried dough pieces to be crispy.

How to Make Chak Chak

Prepare the sweet chak chak dough. Roll it out about ¼" thick and slice it into strips. Some recipes cut the dough pieces into small round pieces, the size of a pine nut. That's time consuming and we always make them in small strips. Shake to separate the dough strips, and fry them in small batches in oil. Allow to cool on a paper towel.

Prepare the honey mix by boiling honey and sugar in a small pot. Toast the almonds in a frying pan. Place the Chak Chak and almonds in a bowl. Drizzle over with hot honey mixture and mix with 2 wooden spoons. As it sets very quickly, place it on a plate, press firmly and form a small mound. Use water on your hands for it to be less sticky. Allow to cool before serving.

I like this sweet dessert to be soft and sticky, so I use more honey. If you want it to set hard in the fridge, then use 50:50 mix of sugar and honey, or increase the sugar to 75% of the sugary sweetness. More sugar = harder Chak Chak.

When to Serve Chak Chak

Obviously, it's a dessert! Traditionally it's is eaten at special events ie. when a traveller arrives, or at a wedding or celebrations, however who wants to wait for those events to eat a delicious dessert? The rich honey cake isn't hard to make, and has no fancy ingredients that you don't have in your pantry. Basically it's fried dough, covered with honey, sometimes with dried fruit and nuts. Hazelnuts or walnuts are commonly used but I love Chak Chak with toasted almonds. If served warm, it tastes amazing and it gooey, especially if using less sugar and more honey.

Usually you wait for it to set hard before serving. However, you should try it warm, especially with the toasted almonds! It's quite a sweet recipe, I always enjoy it with Russian Zavarka Tea to wash it down with!

Now you have this recipe for Chak Chak (Чак-чак) and you need to try this wonderful dessert. Bon Appetit! Приятного аппетита! 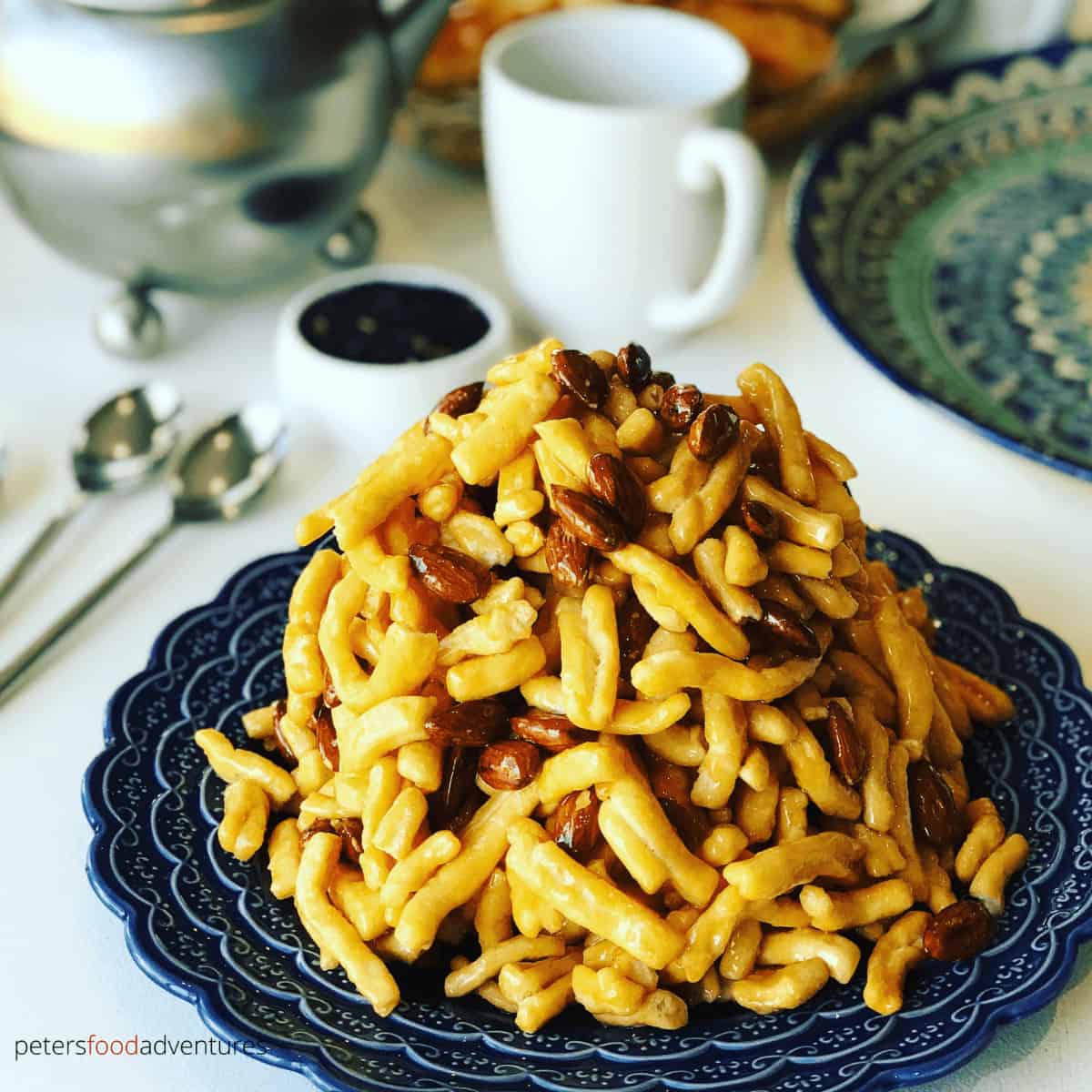 This website uses cookies to improve your experience while you navigate through the website. Out of these cookies, the cookies that are categorized as necessary are stored on your browser as they are essential for the working of basic functionalities of the website. We also use third-party cookies that help us analyze and understand how you use this website. These cookies will be stored in your browser only with your consent. You also have the option to opt-out of these cookies. But opting out of some of these cookies may have an effect on your browsing experience.
Necessary Always Enabled
Necessary cookies are absolutely essential for the website to function properly. This category only includes cookies that ensures basic functionalities and security features of the website. These cookies do not store any personal information.
Non-necessary
Any cookies that may not be particularly necessary for the website to function and is used specifically to collect user personal data via analytics, ads, other embedded contents are termed as non-necessary cookies. It is mandatory to procure user consent prior to running these cookies on your website.
SAVE & ACCEPT
758 shares