This Palava Pilaf Recipe (Плов) is my favourite Russian comfort food, but is actually an Uzbek dish. Most former Soviet Republics enjoy Plov with many variations. It's very common in Central Asia where it originates.

Traditionally, it's cooked by the man of the house, and is popular for weddings. But we eat it all the time for dinner, usually with dill pickles or with my Salted Pickled Tomatoes which go perfectly with Palava Pilaf. Cumin, coriander and spices are quite common, but my mum never liked heavy spices and stuck to basics.

Why Do We Call It Palava instead of Plov?

My parents were born in North West China (just south of the Soviet Union), right beside Tajikistan, which is where the influence of the word Palava came from. In Tajikistan it's called Palav (Палав), but Plov is the correct Russian name. Worldwide, there are many versions of Pilaf, known as pilav, pilau, pelau, pulao, pulaav, palaw, palace, palava, plov, palov, polov, polo, polu, kurysh. No one culture really owns this word as there are many names and subcultures to the recipe. I remember someone telling me that Palava isn't a word, how misinformed they are about how many pilaf recipes there are!

This Palava Pilaf recipe can also be made with dried apricots, raisins, and less commonly with dried cranberries, prunes, and even barberries. As a kid, I absolutely hated eating the raisins in Palava and always picked them out. My sister loved the raisins and mum always included them, maybe it was her way of trying to make me eat more fruit! This is my mum's Palava Pilaf recipe, but my wife makes Plov a little differently from my mum, which I absolutely love and will post soon.

My mum insists that the rice used must be no larger than medium grain rice. It's the rice commonly used in Central Asia. Palava or Plov shouldn't use long grain rice, not definitely not Jasmine or Basmati. She actually uses Kokuho Rose Short Grain Rice, marketed as a sushi rice in Australia, and costs a fortune here (as it's imported from California). Plov is commonly made with long grain rice, it's your choice. It's funny how little differences across regions change a dish. Mum's Palava Pilaf recipe has a really lovely dark colour through the rice, compared to many plov recipes. This is because she caramelizes (fries) the carrots really well. Try it!

The secret to a colorful and flavourful Palava Pilaf recipe is not adding turmeric, cumin or flavours, but it's ensuring you have plenty of fried carrots and lots of oil. Many pilaf dishes can be quite light in colour, and sometimes light in flavour. The flavour is in the fried oil, the colour from the carrots. The trick is to get the balance right, too much oil makes it oily, and not enough oil loses flavour.

And before you freak out, yes, I stirred the rice in this version. Traditionally the rice isn't mixed through, but layered on top of the meat mixture when cooking the rice. Trust me, it's ok. You can layer it on top if you like, but I stir the rice for the flavour to be cooked through. I will get to Uzbekistan one day a film a real Plov recipe, stay tuned.

So you could make a healthier version of this Palava Pilaf Recipe, skim on the oil and add extra spices, but it wouldn't taste the same. I'm not a skinny, oil free kind of person anyways, why would I try to start that now? Bon Appetit! Приятного аппетита! 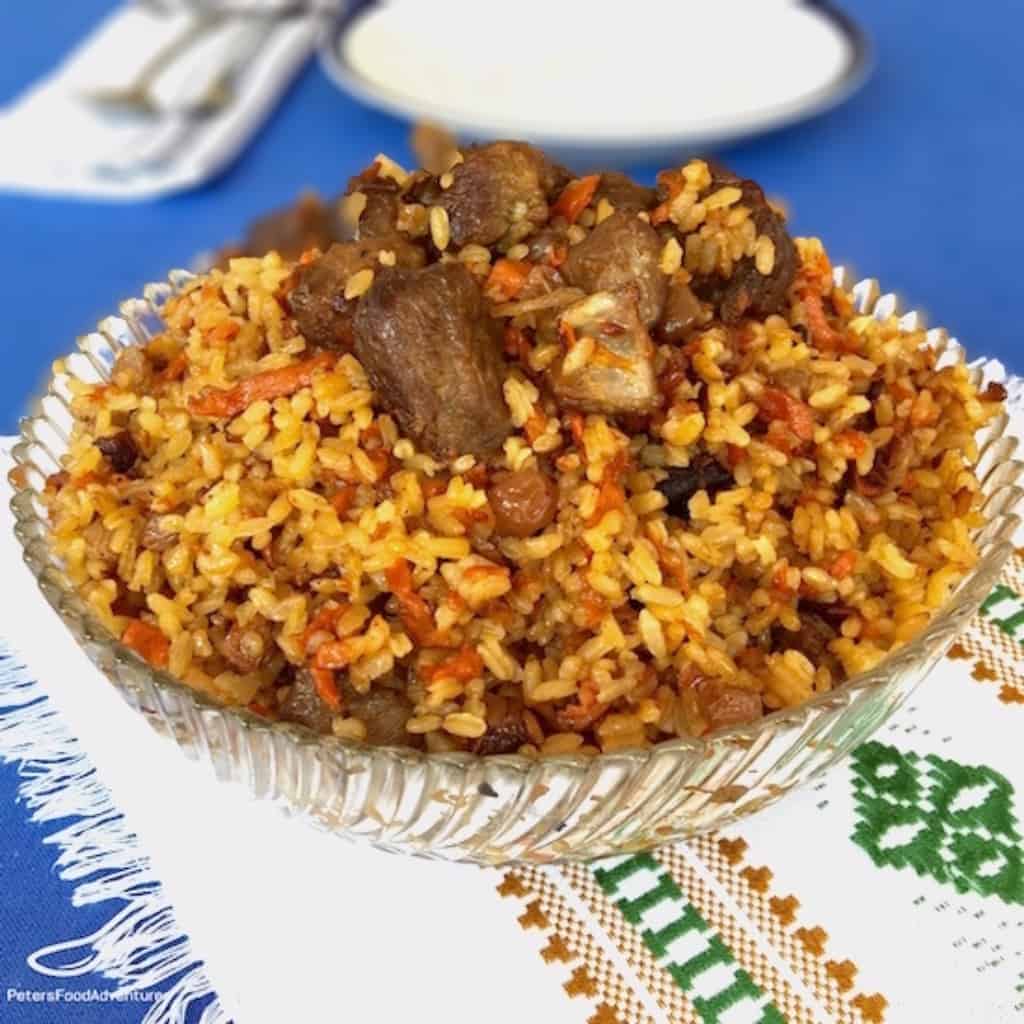 This website uses cookies to improve your experience while you navigate through the website. Out of these cookies, the cookies that are categorized as necessary are stored on your browser as they are essential for the working of basic functionalities of the website. We also use third-party cookies that help us analyze and understand how you use this website. These cookies will be stored in your browser only with your consent. You also have the option to opt-out of these cookies. But opting out of some of these cookies may have an effect on your browsing experience.
Necessary Always Enabled
Necessary cookies are absolutely essential for the website to function properly. This category only includes cookies that ensures basic functionalities and security features of the website. These cookies do not store any personal information.
Non-necessary
Any cookies that may not be particularly necessary for the website to function and is used specifically to collect user personal data via analytics, ads, other embedded contents are termed as non-necessary cookies. It is mandatory to procure user consent prior to running these cookies on your website.
SAVE & ACCEPT
478 shares