Baked Potato Piroshki are simply the plural form of the Russian word pirozhok, meaning small pie. This recipe is a bunch of small meat pies, but adding everyones favourite carb, the potato. They are also sometimes called Pirozhki, or Pīrāgi, depending of what part of Eastern Europe you’re from. They were introduced by the USSR across the empire and are now commonly found across Eastern Europe to Central Asia.

Hand Pies From Around the World

Around the world there are many variations of a meat pie, such as Fried Piroshki, Empanadas, Samosas, Cabbage Piroshki, Chebureki, Belyashi, and even the British Pasty (not pastry) are all similar. Although Piroshki are commonly fried in oil, to bake it is much healthier and absolutely delicious. I think every culture has their own version of hand pies, usually enjoyed as a snack.

I used to be scared of the work required to make dough with yeast, the rising, the temperature, but I love the dough setting on my Cuisinart bread maker. It does all the work for me, just drop the ingredients and walk away. It's such an easy way to make yeast dough.

I also have the perfect Piroshki dough recipe, made the traditional way. Actually it's my master dough recipe that I use for anything savory made from yeast dough. Check out the video below if you want to see how to make it without a bread maker.

There are many variations of savory piroshki, and I think these Potato Piroshki recipe are one of my favorites. Check out my other Piroshki recipes on the site, including Fried Piroshki with Beef or Sweet Blueberry Piroshki or Cabbage Filled Piroshki (Video).

I think everyone loves potato. Combining mashed potato with ground beef and onion is so simple and rustic, baked perfection. Some recipes only use potato and onion, some use cabbage Mixing the beef with potato makes it easier to work with, especially when trying to close the pirozhok, the mixture sticks together and doesn't get in the way of your pinching. As kids we ate these with Heinz Ketchup, which isn't traditional, but tastes great.

Piroshki freeze really well, allowing the kids to pull them out for an after school snack, or honestly, an easy dinner sometimes along side with some Borscht or Shchi Cabbage Soup.

I hadn't made baked Potato Piroshki for a few years, and my son said, "Wow, I forgot how good these are!" So I'll take the complement, from my kitchen to yours. Bon Appetit! Приятного аппетита! 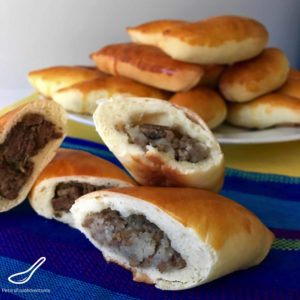 This website uses cookies to improve your experience while you navigate through the website. Out of these cookies, the cookies that are categorized as necessary are stored on your browser as they are essential for the working of basic functionalities of the website. We also use third-party cookies that help us analyze and understand how you use this website. These cookies will be stored in your browser only with your consent. You also have the option to opt-out of these cookies. But opting out of some of these cookies may have an effect on your browsing experience.
Necessary Always Enabled
Necessary cookies are absolutely essential for the website to function properly. This category only includes cookies that ensures basic functionalities and security features of the website. These cookies do not store any personal information.
Non-necessary
Any cookies that may not be particularly necessary for the website to function and is used specifically to collect user personal data via analytics, ads, other embedded contents are termed as non-necessary cookies. It is mandatory to procure user consent prior to running these cookies on your website.
SAVE & ACCEPT
1520 shares