Pirozhki is simply the plural form of the Russian word pirozhok, meaning small pie. This recipe is a bunch of small meat pies. They are also sometimes called pirozhki, or Pīrāgi, depending of what part of Eastern Europe you're from. They were common around the USSR are now commonly found across Central Asian countries like Kazakhstan.

Around the world there are many variations of a meat pie, such as Empanadas, Samosas, Belyashi, and even the Pastie are all similar. Although commonly fried in oil, to bake it is much healthier and absolutely delicious. Either method is fine!

Pirozhki were originally baked in a 'Russian oven', which is a large centrally located masonry oven, which heats the house and cooks your food at the same time. It's been used in Russia since the 15th century. In Russian folklore, Baba Yaga (a Russian forest witch) would bake lost children in the same type of Russian oven. (No children were harmed in my baked pirozhki!) Thank goodness we use regular ovens now. 🤣

Some people prefer pirozhki baked, others like it fried. The recipe doesn't change, only the method of cooking. Fried in a frying pan, or baked on a baking sheet, you decide!

In today's day and age, we are always trying to find ways to save time. That's why I have 2 basic yeast dough recipes that I use. This recipe provides instructions for yeast dough made in a Bread Maker, but I have another recipe I use for traditional yeast dough. You can use either recipe you like with this filling.

When using a Bread Maker, it's such a time saver to throw in the ingredients inside the bread maker and in 90 minutes, you have yeast dough, ready to use! I really only use the Bread Maker for the dough setting if I am in a hurry and don't want to fuss with traditional dough. Check out the video for a traditional yeast dough recipe.

We grew up eating several different variations of Piroshki, depending on the filling. It can be savoury with meat, beef and potatoes, cabbage or made sweet with fruit fillings. This is the classic baked beef pirozhki with onion recipe, which is so tasty. As kids, we would eat it with Ketchup, not so traditional, but I suppose Heinz Ketchup has invaded everywhere. Check out my different Piroshki recipes on my site.

Can You Freeze Pirozhki?

If you're going through all the work of making this recipe, double the batch and freeze what you can't eat. After the dough cycle is complete, remove the dough and start the second batch while you make the piroshki. They freeze perfectly to pull out for a quick delicious snack, or enjoy them alongside your homemade Shchi cabbage soup.

This is another high carb Russian comfort food I could eat everyday, but if I did, I would need to be careful not to become a giant pirozhok. Bon Appetit! Приятного аппетита! 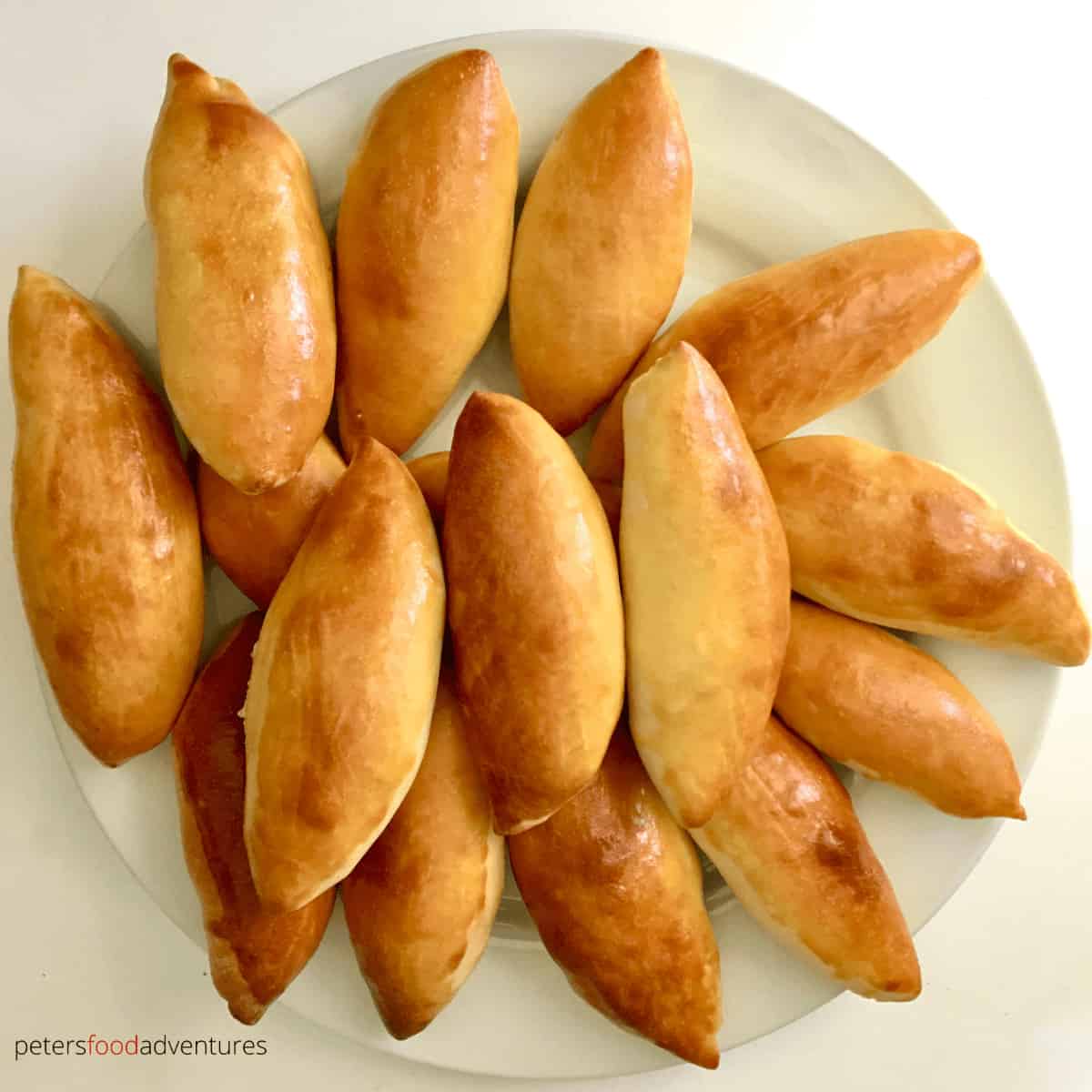 This website uses cookies to improve your experience while you navigate through the website. Out of these cookies, the cookies that are categorized as necessary are stored on your browser as they are essential for the working of basic functionalities of the website. We also use third-party cookies that help us analyze and understand how you use this website. These cookies will be stored in your browser only with your consent. You also have the option to opt-out of these cookies. But opting out of some of these cookies may have an effect on your browsing experience.
Necessary Always Enabled
Necessary cookies are absolutely essential for the website to function properly. This category only includes cookies that ensures basic functionalities and security features of the website. These cookies do not store any personal information.
Non-necessary
Any cookies that may not be particularly necessary for the website to function and is used specifically to collect user personal data via analytics, ads, other embedded contents are termed as non-necessary cookies. It is mandatory to procure user consent prior to running these cookies on your website.
SAVE & ACCEPT
2417 shares