Eggnog French Toast is a holiday classic. An easy breakfast that takes minutes to prepare with egg, nutmeg and eggnog. Make this extra special with brioche as a holiday treat!

I recently discovered that not everyone knows what eggnog is! While it's very popular in North America, here in Australia, it's just starting to get more popular. When we first moved here, we had to hunt to find supermarkets that sold it and if it was in stock. I'm so glad I can find it almost anywhere now.

Eggnog is a sweet dairy beverage made with milk, cream, sugar and eggs, and served with nutmeg and cinnamon. Homemade eggnog will often have brandy or rum added into it. For this recipe, I use non-alcoholic eggnog bought from the store. Check out my non-alcoholic homemade Eggnog recipe which works great as well!

What Do They Call French Toast in France?

As kids, we would joke about French toast. We'd ask if it was simply known as toast in France? The answer obviously is no. In France it's known as pain perdu.French toast isn't necessarily French either, and is known by many different names across Europe. It's known as eggy bread, Spanish toast, gypsy toast and even German toast.

How to Make Eggnog French Toast

It's simply slices of bread that are soaked in beaten eggs, then fried. Day old bread is better to use than fresh bread, as it will soak up more egg without falling apart. You can use any bread, sometimes I use an Italian bread. But it tastes best using sliced Brioche bread, light and fluffy, great for soaking up the egg to make French Toast. Brioche has a high butter and egg content, which complements this recipe perfectly.

How to Serve French Toast

You can sprinkle with cinnamon sugar when serving Eggnog French Toast, but I prefer maple syrup and fresh whipped cream. Some people add cinnamon to the whipped cream, but I think that's cinnamon overload. A sweetened whipped cream balances out rich flavor of this holiday breakfast treat. Living in Australia, our Christmas is in the summer, which I serve this with fresh berries.

Eggnog French Toast is the perfect Christmas morning breakfast. Delicious and easy to make. Made with cinnamon and nutmeg, served with maple syrup and whipped cream. Bon Appetit! Приятного аппетита! 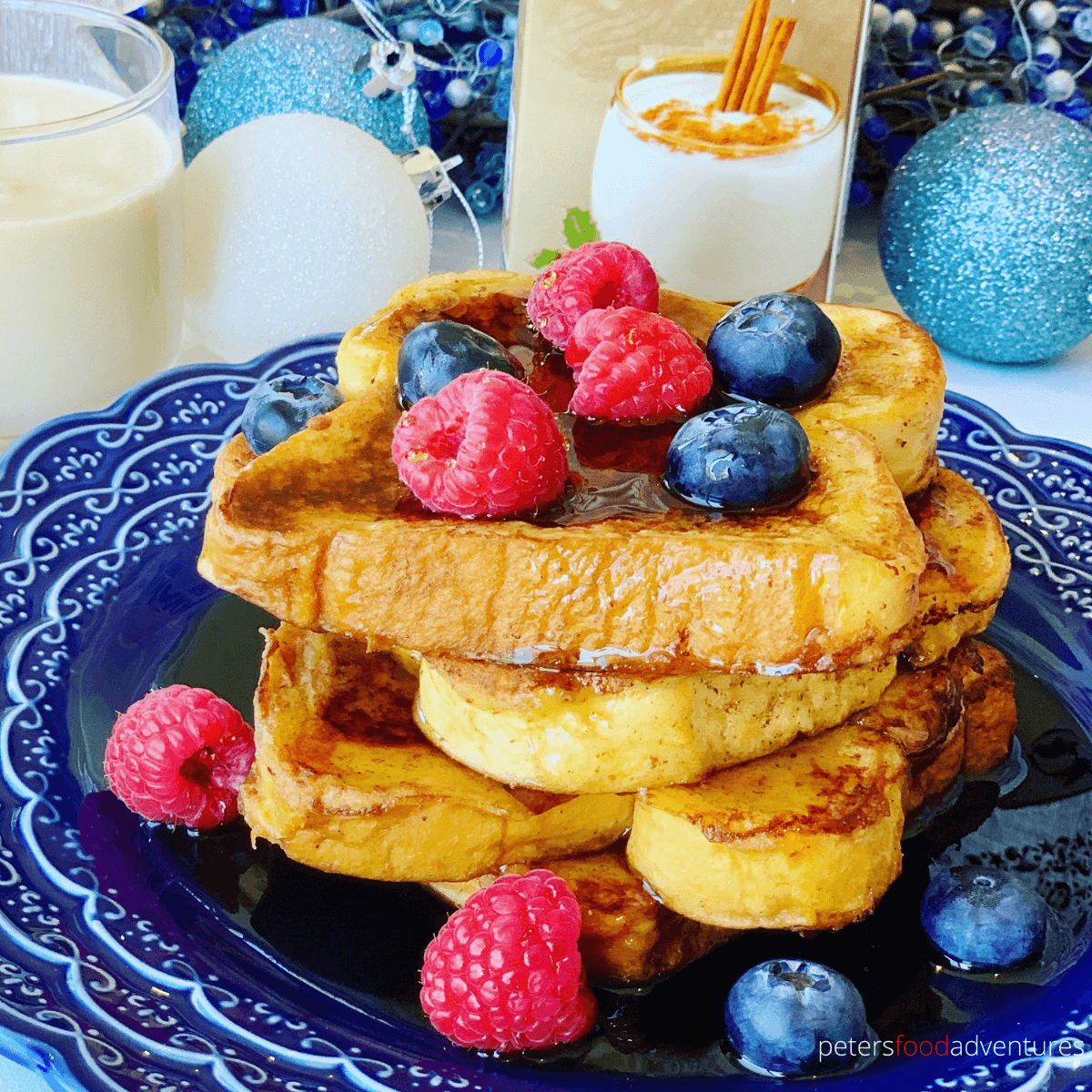 This website uses cookies to improve your experience while you navigate through the website. Out of these cookies, the cookies that are categorized as necessary are stored on your browser as they are essential for the working of basic functionalities of the website. We also use third-party cookies that help us analyze and understand how you use this website. These cookies will be stored in your browser only with your consent. You also have the option to opt-out of these cookies. But opting out of some of these cookies may have an effect on your browsing experience.
Necessary Always Enabled
Necessary cookies are absolutely essential for the website to function properly. This category only includes cookies that ensures basic functionalities and security features of the website. These cookies do not store any personal information.
Non-necessary
Any cookies that may not be particularly necessary for the website to function and is used specifically to collect user personal data via analytics, ads, other embedded contents are termed as non-necessary cookies. It is mandatory to procure user consent prior to running these cookies on your website.
SAVE & ACCEPT
742 shares