It just wouldn't be Christmas without making this Homemade Eggnog recipe! Rich and creamy, a non-alcoholic eggnog the whole family can enjoy. An easy eggnog recipe that's sure to be a holiday hit with everyone!

I want to say that everybody loves homemade Eggnog during the holidays, but I will only be corrected by the internet. 🤣 There are people out there who don't love eggnog because it's too eggy. Others prefer not to use uncooked eggs, while others hate the mixture of spices. I fall firmly into the 'love homemade eggnog' during Christmas holidays. It's much tastier when homemade!

I couldn't imagine a Christmas without eggnog. There aren't too many variations out there when making eggnog. They all consist of eggs, milk, cream, cinnamon, nutmeg and vanilla. Some recipes have added maple syrup, but I think that changes the entire recipe flavor. Homemade tastes better and is thicker than your store-bought versions. Plus it's a great talking point to tell people you made your own eggnog!

I've love eggnog ever since I was a child, and it was obviously alcohol-free! Every Christmas we would drink eggnog, usually while decorating the Christmas tree. It's now something that I make at home for my family. While you can buy it in supermarkets, homemade eggnog without alcohol tastes better, and is a recipe you can make with you kids.

How to Add Alcohol to Eggnog

Some people like to make 2 batches of eggnog, one for the kids, and another for the adults. Alcohol was traditionally added to eggnog as a way to extend the life of the drink, and to kill any bacteria, but that's not really actually true. People add alcohol to eggnog nowadays to make themselves more more merry. For an Alcoholic Homemade Eggnog, just spike your beverage with your choice of alcohol. Alcohol to Eggnog Ratio is 1:5, or as per your own taste. For this recipe, just add one cup of alcohol to the whole recipe.

Is Homemade Eggnog Safe to Drink?

Like all things, you need to be careful. All the Eggnogs sold at supermarkets have gone through a pasteurization process and are safe to drink. However, when making homemade eggnog, consuming raw eggs can result in Salmonella. Caesar Salad Dressing is also made from raw eggs, but is no longer recommended. It's safest is you take your eggs through a pasteurization process, and then cook your eggnog. Some stores sell pasteurized eggs or you can find recipes online how to do it.

If you are serving homemade eggnog to someone who has a compromised immune system, you must heating your eggnog until its cooked to 165°F/75°C. So if you are worried and want a safer eggnog, as recommended simply heat it through. It will add to your cooling time. I hate waiting and want to drink it ASAP!

How to Make Eggnog From Scratch

As I mentioned before, raw egg consumption is no longer recommended. I know, some of you reading this use raw eggs without issue. All I'm saying as it's not recommended. The one step that we used to do when we made homemade eggnog was adding the egg whites to the drink. After you've made your eggnog, and it's cooled in the fridge, beat the leftover egg whites until they are fluffy and form peaks. Mix into the eggnog before serving. This gave the eggnog extra volume and added thickness, and the nice whipped layer in your drink. You can see in the photos how I used to whip the egg whites. But for safety, don't do this anymore.

I've discovered Vanilla Bean Paste, and use it for all my vanilla needs. Traditionally you would use a vanilla pod and scrape out the tiny beans and allow to pods to infuse like the cinnamon. I find the natural vanilla pods are expensive and sometimes hard to find. Imitation Vanilla Extract (most commonly found) doesn't taste the same. Vanilla Bean paste works perfectly and is quick and easy. You won't go back to regular Vanilla extract for your baking needs. You can easily buy it on Amazon. 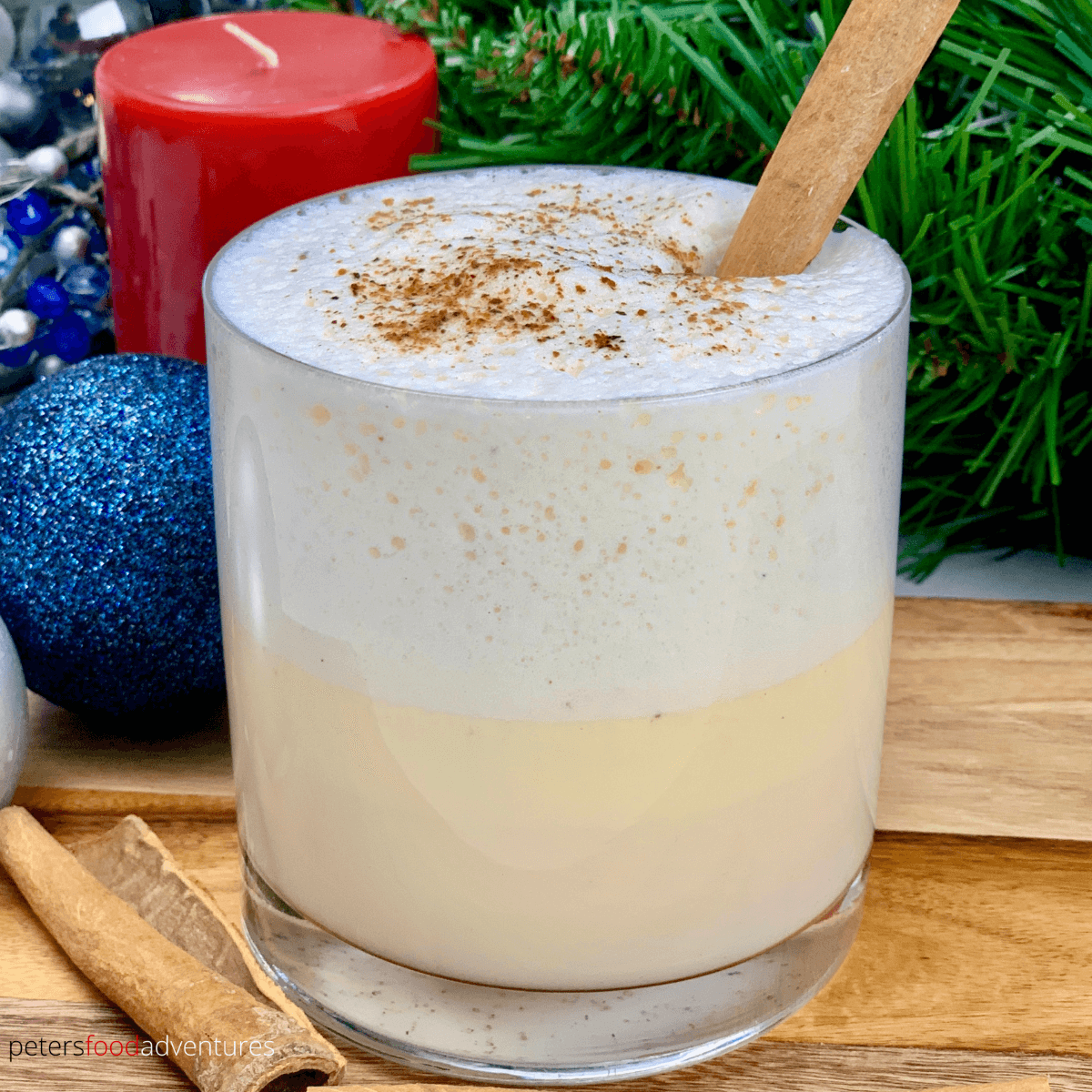 This website uses cookies to improve your experience while you navigate through the website. Out of these cookies, the cookies that are categorized as necessary are stored on your browser as they are essential for the working of basic functionalities of the website. We also use third-party cookies that help us analyze and understand how you use this website. These cookies will be stored in your browser only with your consent. You also have the option to opt-out of these cookies. But opting out of some of these cookies may have an effect on your browsing experience.
Necessary Always Enabled
Necessary cookies are absolutely essential for the website to function properly. This category only includes cookies that ensures basic functionalities and security features of the website. These cookies do not store any personal information.
Non-necessary
Any cookies that may not be particularly necessary for the website to function and is used specifically to collect user personal data via analytics, ads, other embedded contents are termed as non-necessary cookies. It is mandatory to procure user consent prior to running these cookies on your website.
SAVE & ACCEPT
399 shares