I have always hated eating porridge for breakfast. I don't know why, but I'm not usually a breakfast eater, except when it comes to bagels, fried eggs, Mannaya Kasha or Cream of Wheat. While the rest of the family ate porridge, I ate my Mannaya Kasha. It's better known in the US as Cream of Wheat.

What is Cream of Wheat?

This Cream of Wheat recipe is a popular breakfast in Eastern Europe and Russia. It's Semolina cooked in milk to make a hot breakfast porridge, usually served with jam or fruit. The Russian version can be served with Kisel, a thickened fruit dessert.

Semolina is the hard grains leftover when milling flour. The milled grains are often called farina, which also means flour in Italian. Cream of Wheat is made from the wheat middlings. Sometimes this breakfast is called Farina.

Who created Cream of Wheat?

There are versions of Semolina Porridge that have been enjoyed in Europe since the Roman times. This isn't a new breakfast food. In the United States, it was first manufactured in 1893, and has a 2½ minute and even a 1 minute recipe to make. It's become an easy alternative to breakfast porridge made from oats. Of course, I believe it's always tastier to make from scratch, and cheaper too!

This is Russian Cream of Wheat, is called Mannaya Kasha (манная каша). Kasha's have been eaten in Russia for 1000 years, and is a staple of Russian foods. There are different versions across Eastern and Central Europe as well.

Both recipes are made with Semolina, sugar, salt and milk. The difference in the Russian version is the addition of butter. The butter mixes in and melts in the saucepan. I also add a little more butter into each bowl when serving, adding a tiny bit of slightly salty creaminess. Mannaya Kasha is often served together with a bit of Kisel thickened berry dessert. I have Americanized it and added brown sugar, which tastes amazing with the extra butter, a bit caramelized. Otherwise you can serve it with fresh fruit.

How to make Cream of Wheat

When making this Cream of Wheat recipe, always use milk! Don't cook Cream of Wheat with water. I think it doesn't tasty creamy with water, and shouldn't even be an option (like suggested on the back of the Cream of Wheat box). They key is to keep constantly stirring while you slowly pour the farina (semolina) into the hot milk. If you pour too fast, it will have clumpy bits of porridge while cooking. The clumps aren't nice to eat, you just need some patience while stirring! It's so easy to make a homemade Cream of Wheat recipe, you wonder why they charge so much for it in the store. Just buy a bag of semolina instead!

As a kid, I was the only person in my class that ate this for breakfast, I suppose maybe it was just a cultural difference. Boy, how I wanted my parents to buy me Fruit Loops, good thing they didn't! The Russian way to prepare Mannaya Kasha adds a pinch of salt, sugar and butter at the end. You end up with a semi-sweet, slightly salty breakfast kasha. My son loves it so much that this is the first meal he learned how to cook on the stove by himself.

This Cream of Wheat recipe is a Russian breakfast classic, alongside Buckwheat Porridge and Oladi Kefir Pancakes. So next time you see Semolina in the grocery store, buy it, and give this delicious breakfast recipe a try! Bon Appetit! Приятного аппетита! 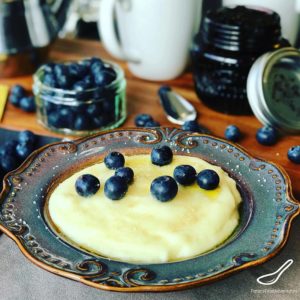