I have fond memories of my mother making Berry Kisel as a dessert for the family. She made it in the summer when we had lots of fresh berries in the garden, or with frozen berries in the winter. It was almost like a fruit soup. Sometimes we ate it warm, but usually it was served chilled. Sometimes you can have it with Mannaya Kasha Semolina Porridge or sweetened Tvorog (quark) for breakfast too.

The name is from the Russian word meaning sour (кислый), pronounced kisly. The first mention if Kisel was in the 10th century, and it looked completely different from what we recognize today. Back then, it was usually made with oats, rye or even as a pea jelly. Yes, think green peas. That doesn't sound very appetizing!

The berry versions of Kisel started to appear in the wealthy homes in the early 19th century. It's served as a dessert, or can be served as a strained drink. My mother's Kisel recipe was never strained. The old recipes never strained the fruit unless there were seeds a hard skins in the fruits. The strained modern varieties of of this dessert are quite popular now, sometimes served as a thickened drink. I think it's like making a Mors Drink, and thickening it. I prefer the older rustic way, it's faster, keeps the fruit in the dessert, plus has added fruit fibre. Some people puree the fruit before thickening.

This isn't the recipe that's found in Soviet Cafeterias or Stolovaya restaurants, which was the thickened drink version. Often hated by kids, because it was made in such an unappetizing way. As kids, we loved this homemade Kissel recipe, because the fruit was left in the dessert and not strained!

Kisel, Kissel or Kisiel is popular in Slavic countries like Poland, Ukraine, Russia, Estonia, Latvia, Lithuania, Belarus and even in Finland, with their own versions of this recipe.

Kisel is always made with potato starch. It is the default thickener in Russia, and can be made at home from potatoes, which are always plentiful in Russia. Corn starch can be used as a substitute, and is sometimes easier to find but I don't recommend. There is one benefit to using potato starch, clearer liquids. Corn starch will make the Kisel cloudier, so it doesn't look as nice when serving. So we always use potato starch when thickening anything, it makes clear liquids almost glisten! If I can't find it in the supermarket, Asian grocers usually carry it.

How to Make Kisel

This is such an easy recipe to make, full of fruity goodness. We usually buy frozen berries from the supermarket, which makes it easy to make this dessert year round. Frozen blueberries, strawberries, blackberries, raspberries and cranberries. Just bring them to a simmer with water and sugar, then thicken with the potato starch. You can strain the fruit before thickening, but as I said, I prefer the rustic version of kisel.

Kissel is a classic Russian and Slavic dessert or drink. It's like a summer soup made with berries thickened with potato starch. I love this dessert from my childhood. Bon Appetit! Приятного аппетита! 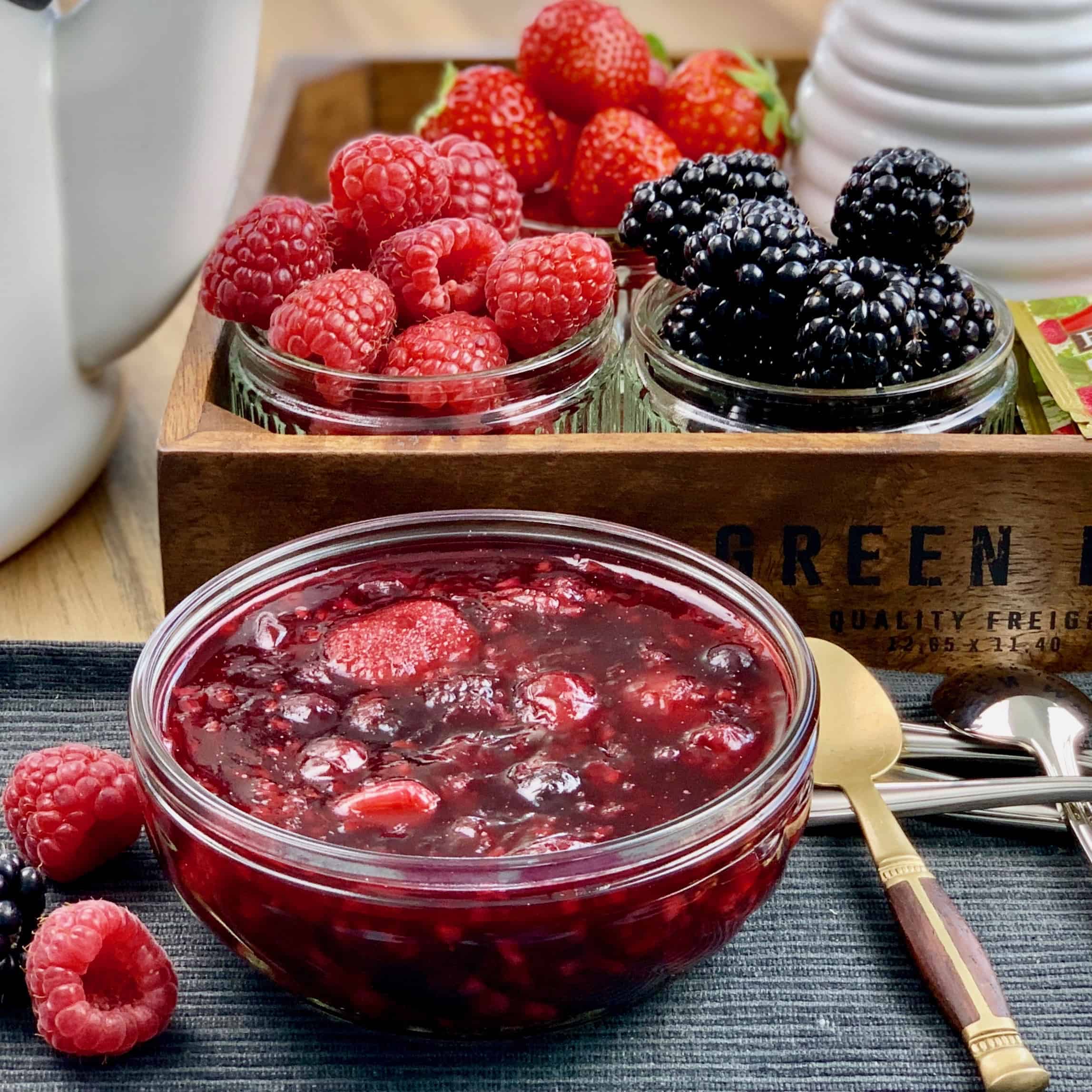 This website uses cookies to improve your experience while you navigate through the website. Out of these cookies, the cookies that are categorized as necessary are stored on your browser as they are essential for the working of basic functionalities of the website. We also use third-party cookies that help us analyze and understand how you use this website. These cookies will be stored in your browser only with your consent. You also have the option to opt-out of these cookies. But opting out of some of these cookies may have an effect on your browsing experience.
Necessary Always Enabled
Necessary cookies are absolutely essential for the website to function properly. This category only includes cookies that ensures basic functionalities and security features of the website. These cookies do not store any personal information.
Non-necessary
Any cookies that may not be particularly necessary for the website to function and is used specifically to collect user personal data via analytics, ads, other embedded contents are termed as non-necessary cookies. It is mandatory to procure user consent prior to running these cookies on your website.
SAVE & ACCEPT
709 shares