I love eating Meat Blini - or Blinchiki stuffed with meat! One of the many ways to enjoy Blini - thin Russian pancakes. Everything tastes better stuffed with a juicy and flavorful filling.

Blinchiki, Crepes, Blintzes or Blini are very common in Russia and across Eastern Europe. They are a Russian version of crepes and a staple in every Russian and Ukrainian household. They're eaten at any time of day and alongside a large meal. As delicious as breakfast Blini are, Meat Blini Stuffed with meat (Блинчики с мясом), adds a whole new dimension.

Blini are easy to make, check out the step by step Blini recipe here. We usually make Blini on a Saturday morning to enjoy for breakfast. However, they are also commonly stuffed as well. This makes them more like a meal, or even as a dessert. These are my favorite Blini stuffing

You can also stuff them with fruit, but it's more common to make Meat Blini. Any ground meat will work, from ground turkey, ground chicken to beef or ground lamb. I like adding rice to the filling, and even sometimes add thin rice noodles (rice vermicelli). This is probably from the Chinese influence of my parents being Russians born in China. Trust me, it works! A more western influence is adding grated cheese to your meat mixture stuffing.

Traditionally, you just season the meat blini stuffing with salt, pepper and fried onions. However, it can be a bit dry which then makes me add lots of sour cream. But I've found a way to add flavor and moisture to your meat blini. Add some gravy! I'm not talking the made from scratch gravy, but the easy instant gravy. It will add flavor, salt and moisture. Just make sure the gravy isn't too runny. Slowly add it in until you're happy with the consistency.

Many Blinchiki recipes are fried in a frying pan, after they are stuffed. A popular recipe that's pan fried Blinchiki is Naleskniki (fried with Tvorog). The Stuffed Meat Blini recipe is based on how my mom makes Blinchiki, on big trays that are heated in the oven. Its a time saver to prepare and roll the Blinchiki, place them into a tray, and pat the top each Blin with butter. It's kind of like frying them as the butter melts, but much faster as it allows you to multi-task in the kitchen. If you prefer, you make it the long way and can fry them in a frying pan with butter. Either method works.

It's always a bit of a chore to make Blini. Usually I have 2 frying pans making Blini at the same time to speed things up. This leaves me with a small mountain of blini. It's the perfect meal that you can prepare ahead of time for future meals. Meat Blini (Stuffed Crepes) freeze wonderfully, just make sure they are fully covered from the freezer frost. When ready, just defrost the tray and bake in oven before serving.

So many different methods and flavors when making stuffing for Blini. I'm convinced you can't go wrong with it, I could eat them everyday. Bon Appetit! Приятного аппетита! 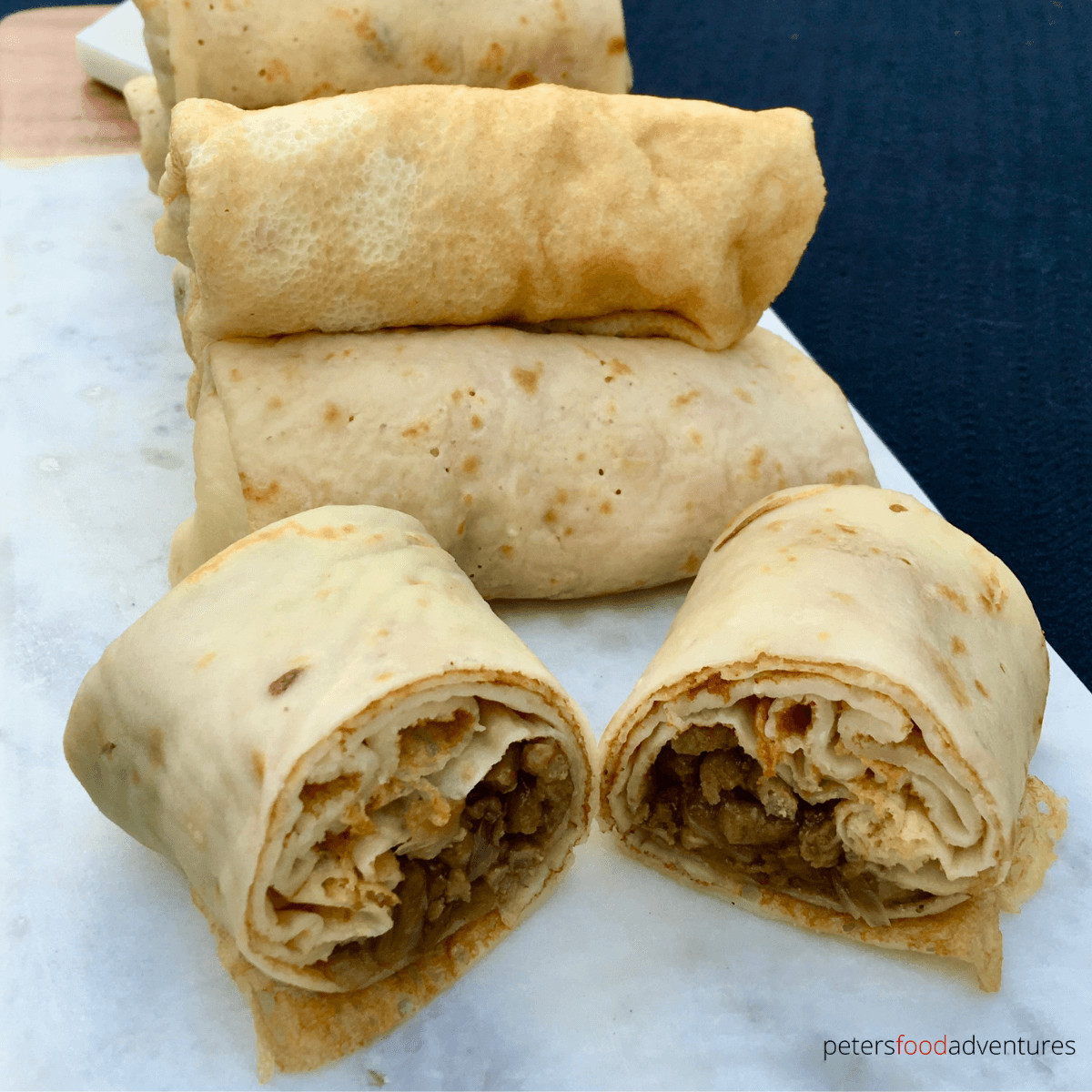 This website uses cookies to improve your experience while you navigate through the website. Out of these cookies, the cookies that are categorized as necessary are stored on your browser as they are essential for the working of basic functionalities of the website. We also use third-party cookies that help us analyze and understand how you use this website. These cookies will be stored in your browser only with your consent. You also have the option to opt-out of these cookies. But opting out of some of these cookies may have an effect on your browsing experience.
Necessary Always Enabled
Necessary cookies are absolutely essential for the website to function properly. This category only includes cookies that ensures basic functionalities and security features of the website. These cookies do not store any personal information.
Non-necessary
Any cookies that may not be particularly necessary for the website to function and is used specifically to collect user personal data via analytics, ads, other embedded contents are termed as non-necessary cookies. It is mandatory to procure user consent prior to running these cookies on your website.
SAVE & ACCEPT
617 shares