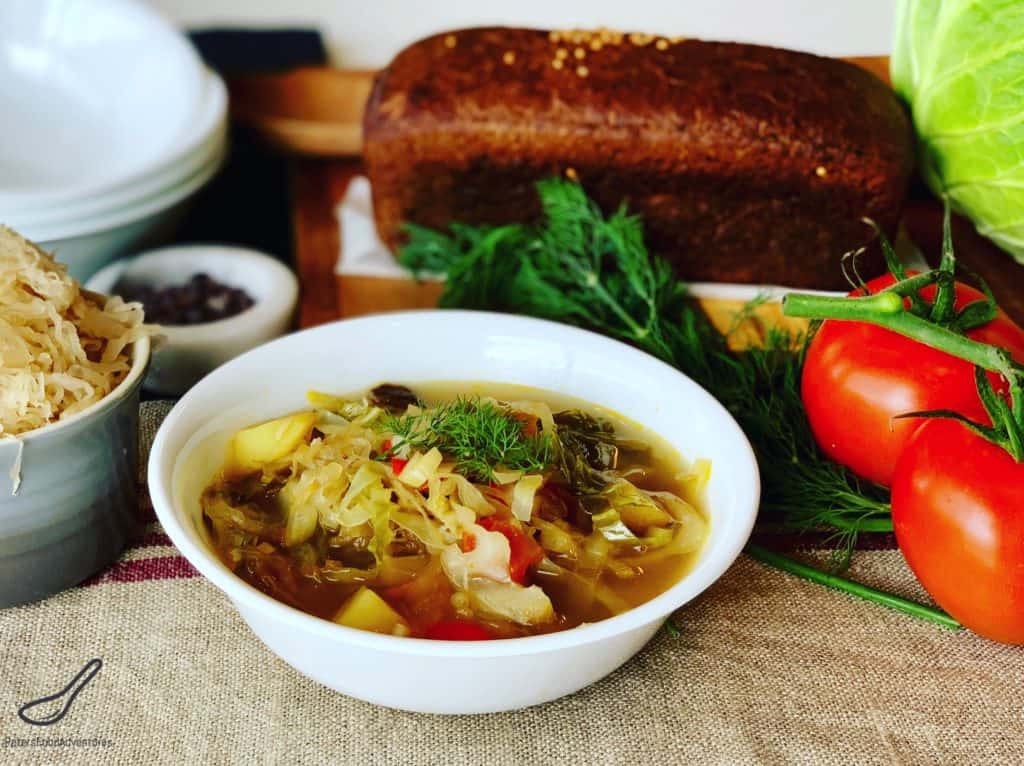 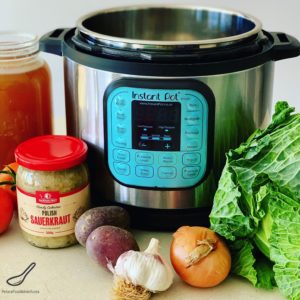 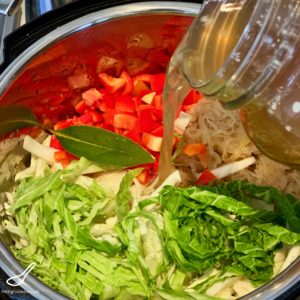 I use my Instant Pot for everything now. I love the one pot dinner element in many recipes, and how it saves time. Cabbage has been a staple in Russian cooking forever, so it only makes sense that I would adapt my recipes to be used in an Instant Pot.

You might not know what and Instant Pot is, as it's not available everywhere in the world yet. It's an electric pressure cooker that makes the most amazing soup stocks and bone broths. Check out my easy Bone Broth recipe, which was the main reason I bought this electric pressure cooker. I explain more in my Bone Broth recipe about the benefits of this type of broth vs regular stock. You can use store bought beef stock when making this recipe, but after making homemade bone broth, you won't every buy broth again! Make the Bone Broth ahead of time and keep it in the fridge until you are ready to use it.

Cabbage Soups are often used in fad diets. Back in the 1990's, there was a Cabbage Soup Diet that allowed you to eat as much Cabbage Soup that you liked. This isn't that recipe, but I will post it soon for nostalgic reasons. I remember my sister making that recipe, and we even tried it of a week. Modern diets are now Keto and Paleo type of lifestyles. This recipe is not Keto or Paleo because of the potatoes. I do love a hit of carbs, and will add them in wherever I can! This Instant Pot Cabbage Soup also isn't a fad, as pressure cookers have been around for years. Instant Pot has just improved the cooking experience by adding extra features.

There are many different types of cabbage soup recipes out there, across many cultures. This recipe is based on the Russian Cabbage Soup called Shchi, which is a classic Russian recipe. If you click the link, it takes you through the classic stove top instructions, if you don't have an Instant Pot.

Shchi Soup should be a bit sour, so I add sauerkraut alongside the fresh cabbage. For instance, when you make Borscht, you add some red wine vinegar for the extra bit of sour to balance our the flavors. You don't need to do that in this recipe, as the sauerkraut adds the sour (thus the name).

Russian foods always have lots of fresh dill in our recipes, we can't get enough of dill! I add a hint of tomato and a red pepper just for a bit of color and flavor. Many Russian cabbage soup recipes don't, as the cabbage is the hero of the dish. If you add more tomato and red peppers and other vegetables, it changes the flavor and turns into a vegetable minestrone. The balance of the cabbage, potatoes and dill in this recipe makes it just right.

It's always served with homemade sour cream and dark rye bread. If you can find a Russian Rye called Borodinsky Bread. It's a very heavy loaf of bread made with rye flour, malt, coriander and caraway seeds. I like heavy bread. If you were to throw a loaf of Borodinsky bread, it should leave a mark on you. It's not the bleached tasteless white bread you buy in supermarkets these days. It's the perfect bread to go along side cabbage soup.

If you've never cooked with an Instant Pot before, 4 minutes seems like a very quick cook time. But it takes a bit longer than that! After locking the lid and setting the vent to SEALING, it takes about 25 minutes for the soup to heat up and pressure to build. When the pressure release valve pops up, then the 4 minutes starts. It also takes a few minutes to release the pressure after your time is complete. The Instant Pot is pressurized with very hot liquid, so be careful not to burn yourself. I use a tea towel to cover the release valve to VENTING. Release carefully, hot steam and boiling liquids can spray and burn you too. It's only safe to open and unlock your Instant Pot after the valve drops. So a 4 minute cooking instruction actually takes about 30 minutes. The benefit of this is that you don't need to worry about the timing and mixing of the soup on the stove. The Instant Pot also allows you to sauté in the same pot, so there is less dishes to wash.

So here is my easy Cabbage Soup recipe. As a huge fan of the Instant Pot, we are cooking with it more and more each day. You should see how tender pulled beef is after 1 hour in the instant pot. You won't ever go back to slow cooking again! 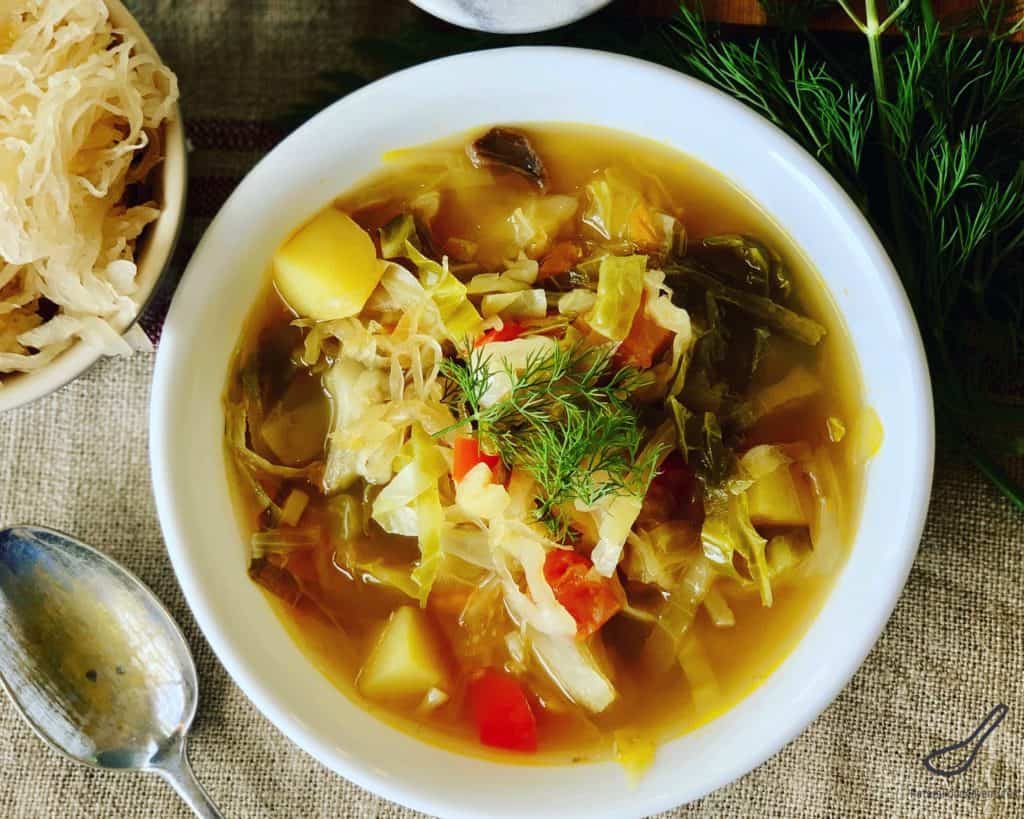 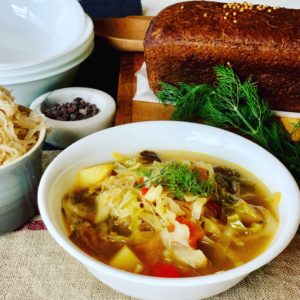 When adding the shedded cabbage into the Instant Pot, it will be very full. Don't worry, cabbage breaks down when heated. When making bone broth, I always add bones with meat on them as well, to use in the soup. If you don't have meat on your bones, you can skip this step, but it tastes better with meat.
Keyword Cabbage Soup, Instant Pot Cabbage Soup, Pressure Cooker Cabbage Soup 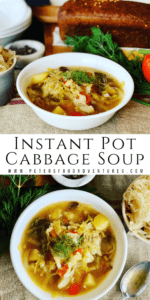 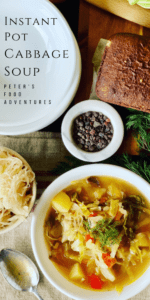 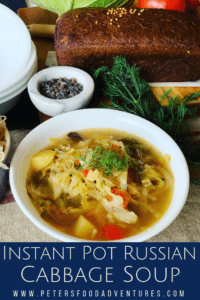 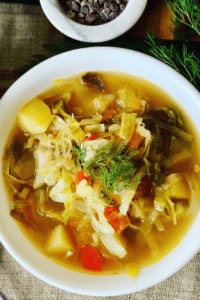 Disclosure: Some of the links below are affiliate links. At no cost to you, I will earn a commission if you click through and make a purchase.
« Easy Apple Turnovers with Puff Pastry
Roast Duck Braised in a Master Stock »

This website uses cookies to improve your experience while you navigate through the website. Out of these cookies, the cookies that are categorized as necessary are stored on your browser as they are essential for the working of basic functionalities of the website. We also use third-party cookies that help us analyze and understand how you use this website. These cookies will be stored in your browser only with your consent. You also have the option to opt-out of these cookies. But opting out of some of these cookies may have an effect on your browsing experience.
Necessary Always Enabled
Necessary cookies are absolutely essential for the website to function properly. This category only includes cookies that ensures basic functionalities and security features of the website. These cookies do not store any personal information.
Non-necessary
Any cookies that may not be particularly necessary for the website to function and is used specifically to collect user personal data via analytics, ads, other embedded contents are termed as non-necessary cookies. It is mandatory to procure user consent prior to running these cookies on your website.
SAVE & ACCEPT
735 shares