Everyone loves a traditional Greek Salad recipe (known as Horiatiki in Greece), a staple of Greek cuisine! It's so easy to make! It's an essential summer salad for a backyard Bbq or a Potluck meal. No vegetable salad tastes better in the summertime, especially when using vegetables from your own garden. This recipe goes perfectly with my Instant Pot Greek Roast Lamb.

How to make Greek Salad

This salad is typically made with tomatoes, cucumbers, red peppers, olives and red onion, and Greek feta cheese. Traditionally the red onions are cut into rings, but I tend to chop all the ingredients the same size including the onion. I find it's easier to eat when they're cut the same size. Some people add a bit for fresh chopped dill. It can't be easier to toss it all together for a tasty summer salad.

Traditional Greek Salad should never be served with lettuce as a way to fill your salad bowl. It's just a stingy and cheaper way of making this salad, and is sadly becoming more popular with restaurants. It's much tastier and healthier with only vegetables, as it was intended.

Which Olives are best?

Olives are very important when making a Greek Salad recipe. Whatever you use, do NOT use the canned black olives. They are tasteless and clearly sold in countries that don't grow olives. The tastiest olives for this salad are dark purple Kalamata Olives, either sold fresh in the deli or in glass jars. Kalamata Olives are also sold as Kalamon Olives. They are called Kalamon Olives only if they are not grown in the Kalamata region of Greece. It's the same meaty flavorful olive, just with a different name because of where it was planted. I recommend buying the pitted olives. Nobody likes to bite into a Greek Salad and break a tooth on an olive!

Don't buy your Greek Salad Dressing, it's so easy to make, ready to pour over your salad. Make the dressing ahead of time to allow the flavors meld together. When making salad dressings, sometimes I use an old glass jar, put the lid on and shake the flavors together to emulsify. Remember to give it a shake again before pouring over the salad. This only needs 4 ingredients, red wine vinegar, oregano, olive oil and salt. Such an easy Greek Salad Dressing recipe.

So my easy recipe has a few dos and don'ts. Make your own dressing, buy Kalamata Olives and of course, buy Greek Feta Cheese. An easy summertime favorite Greek Salad Dressing recipe, perfect for any time of year. Bon Appetit! Приятного аппетита! 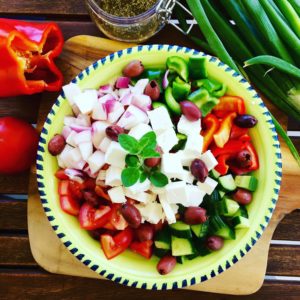