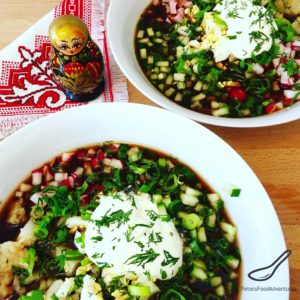 What is Okroshka Soup?

Okroshka with Kvas is a Russian summer soup that is served cold. Think of gazpacho, which is probably the most famous other cold soup that people recognise. It's a great soup when your garden is full of vegetables, and the weather is hot, but might be an acquired taste. Ok, it's a love it or hate it soup, with no western food equivalent.

Okroshka is derived from the Russian word literally meaning “chop” крошить, which is why it’s chopped up in small pieces. I bought a Zyliss Onion Chopper, which works beautifully for all my fast chopping (cubing) needs. There are many ways to make Okroshka, from a soup base perspective, but the vegetables always are kind of the same. It commonly a vegetarian soup, or you can use boiled meat, but I opted for using ham.

The 2 most common Okroshka soups are made either with Kvass or with Kefir, both having a totally different soup flavour. There's also Svekolnik and  Holodnik Soup, which are cold type of beet Borscht soups which is one of my favourites. I’ve made Okroshka with Kefir  it's my favourite Okroshka.

This recipe is made with Kvass, which is a Slavic fermented drink, made from Rye bread, flavoured with raisins, berries or even mint. It is slightly alcoholic, usually less than 1%, which is considered alcohol free in Russia, but you would need to drink an incredible amount to feel it's effects. It's considered almost a version of Russian Coca-Cola style drink, only healthier.

In Soviet times, there was a large Kvass barrel on wheels, which people would line up for, drinking from a single communal cup. Whilst I never experienced this, the thought of drinking from a communal cup with hundreds of strangers grosses me out. Luckily you can buy it like a soft drink now. There is even Kvass sold for summer soup.

As Kvass can be hard to find, you might need to make it yourself, as you definitely don't want a  sweet Kvass for this soup. Eastern European Delis sell Kvass that is specially for soup too. Check out my tasty Kvass recipe, but you can't make it this sweet for soup. The best part is that Okroshka with Kvass is incredibly filling as it's packed full of vegetables. Bon Appetit! Приятного аппетита! 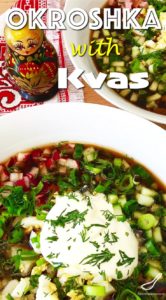