Finnish Salmon Soup (Финская уха) or Lohikeitto, is delicious and creamy Salmon soup, popular across Scandinavia and Northwestern Russia. Usually made Salmon heads and bones for the broth, this soup is delicious and full of vitamins and minerals.

In Russia, this style of soup is called Ukha, which is the clear broth version of this soup. Finnish Fish Soup has whipping cream in it, which mellows out the fishiness of the soup. Lohikeitto is a creamy fish soup, and easier to make than you think! I first tried this soup in St Petersburg.

Finland and St Petersburg (2nd largest city in Russia which is located in NW Russia) are only 200km apart, and it's only natural that there are recipes in common across the cultures. Over the centuries, the borders kept changing (first border treaty with Russia was signed in 1323) and Finnish people lived in what is Russia today.

The fish broth for Salmon Soup is made with Salmon heads, the more in the pot, the merrier. I used to call this Fish Head Soup as a kid, and it really grossed me out. I was scared of the fish heads, but your don't eat them!  Of course you strain the broth before you add the chunky fish fillets, leaving a delicious and nutritious fish soup.

The Salmon Head Broth makes a flavourful bouillon soup base, just like when you make a bone broth with beef or chicken soup. It's a simple stock with only onions, peppercorns, water and the fish heads. Bring to a boil and allow to simmer for about 45 minutes. If the water is reduces due to boiling, you can add more water so you have about 3 litres of finished soup stock.

You definitely need to strain the fish broth, so it is as clean and clear as you can get. I just use a colander and cheesecloth, and strain the broth, and discard the leftovers. When making Ukha Soup, you want a very clear broth, as it's visible and visually appealing. With Lohikeitto, it's a creamy broth, so just straining it though a cheesecloth is enough.

How to Make Salmon Soup

After you Fish Broth is done, it's a very easy soup to finish (get it)! I start by prepping the Salmon. Use boneless, skinless Salmon fillets that you can buy in any grocery store. You don't want the fish skin and scales in the soup. Cut them into chunkier pieces, about 2" cubed. If they are cut too small, they will fall apart.

Sauté leeks in butter until they are softened. Sometimes I sauté the carrots at the same time with the leeks, or you can add them in later. Bring the fish stock to a boil, and add the cubed potatoes, sautéed leeks, carrots, and bay leaves. Simmer for about 10 minutes, until the potatoes start to soften.

Add your chunks of Salmon into the Salmon Soup. Continue to simmer for about 10 minutes until the salmon is cooked. Finally add the whipping cream, fresh dill and season with salt and black pepper.

Don't let Salmon heads or fish bones in the soup scare you away from making this delicious soup. We think nothing of eating New England Clam Chowder or a Seafood Chowder. This recipe is along those lines, and even more nutritious. You won't go wrong with Ukha or Salmon Soup. Bon Appetit! Приятного аппетита! 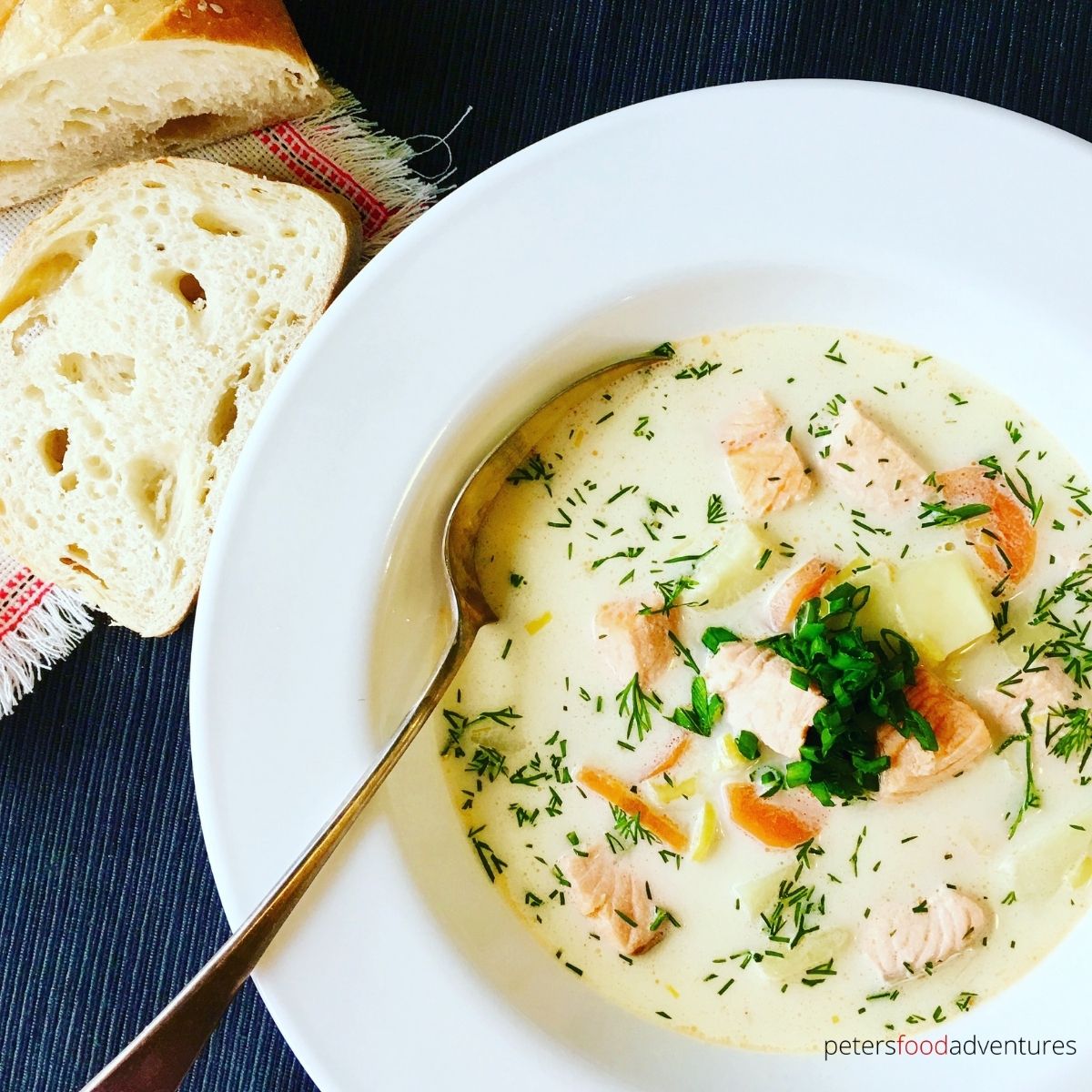 This website uses cookies to improve your experience while you navigate through the website. Out of these cookies, the cookies that are categorized as necessary are stored on your browser as they are essential for the working of basic functionalities of the website. We also use third-party cookies that help us analyze and understand how you use this website. These cookies will be stored in your browser only with your consent. You also have the option to opt-out of these cookies. But opting out of some of these cookies may have an effect on your browsing experience.
Necessary Always Enabled
Necessary cookies are absolutely essential for the website to function properly. This category only includes cookies that ensures basic functionalities and security features of the website. These cookies do not store any personal information.
Non-necessary
Any cookies that may not be particularly necessary for the website to function and is used specifically to collect user personal data via analytics, ads, other embedded contents are termed as non-necessary cookies. It is mandatory to procure user consent prior to running these cookies on your website.
SAVE & ACCEPT
1068 shares