Sorrel Soup is popular in Russia and Ukraine, and across Eastern Europe. It's a sour soup often eaten in the spring and summer when Sorrel is growing in the garden. It's a soup that can be eaten hot or cold. Sorrel is definitely an acquired taste, which I love.

Sorrel is a garden herb like plant that looks like spinach, but tastes sour and tangy. It's sometimes called Spinach Dock, but doesn't taste like spinach. The sourness is due to oxalic acid. Sorrel is sometimes used in salads, soups or stews. In Greece, it's sometimes added to Spanakopita. It's hard to find in grocery stores, but many Eastern Europeans grow them in their gardens. Your local farmer's market might have some when in season. It doesn't last long in the fridge, 2-3 days max, and is best used right away.

In Russian, Sorrel is called Schavel (щавель). It's also known as Schav, taken from the Yiddish language. We call it Щавелевый суп or зеленый борщ which translates as Shchavel Soup or Green Borscht. It's like a variation of traditional red beet borscht, but instead of beets it's made with Sorrel.

How to Make Green Borscht

Green Borscht (Sorrel Soup) starts with a soup broth, I love using my Instant Pot for a nice bone broth. You ca also make this a vegetarian soup by making vegetarian stock. If making a bone broth, keep the meat from the bones to add back into the soup.

This is a simple soup recipe made with cubed potatoes, a carrot, caramelized onion, garlic and fresh herbs. The potatoes are boiled in the broth, while you fry the onions and garlic. Add the fried onions and julienned carrots to simmer for about 10 minutes. A hard boiled egg is usually served in the soup. If you want to be fancy, you can use tiny quail eggs. I love eating this sorrel soup with lots of fresh dill and a dollop of homemade Smetana Sour Cream.

Is Sorrel Good For You?

Sorrel Soup doesn't look like the tastiest of soups. It's a hard soup to photograph. The bright green sorrel turns a darker green-brown when cooked. That being said, Sorrel soup is full of vitamins. It's high in Vitamin C, is low in calories and high in fibre. Sorrel Dock has more nutrients than Spinach and Kale. It can aid digestion and boosts immunity and is high in iron.

However, eating too much isn't a good thing either. Eating excessive amounts of Sorrel can cause stomach irritation, but it's fine in soups and mixed in salads. Some people recommend to scald the sorrel with boiling water before using it. I have never done that before, nor has my mother or anyone I know in Slavic cooking. Maybe we all have iron stomachs! 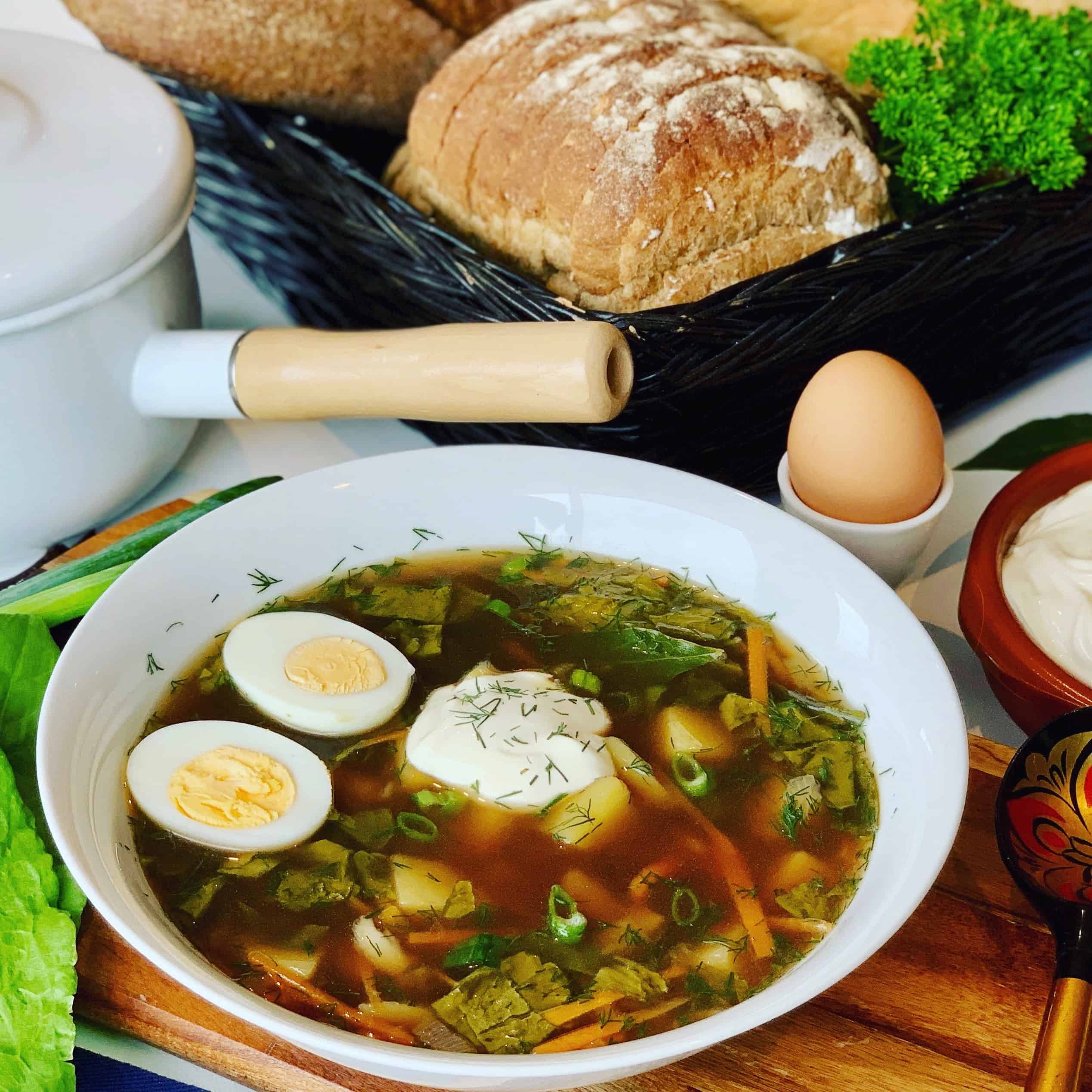 This website uses cookies to improve your experience while you navigate through the website. Out of these cookies, the cookies that are categorized as necessary are stored on your browser as they are essential for the working of basic functionalities of the website. We also use third-party cookies that help us analyze and understand how you use this website. These cookies will be stored in your browser only with your consent. You also have the option to opt-out of these cookies. But opting out of some of these cookies may have an effect on your browsing experience.
Necessary Always Enabled
Necessary cookies are absolutely essential for the website to function properly. This category only includes cookies that ensures basic functionalities and security features of the website. These cookies do not store any personal information.
Non-necessary
Any cookies that may not be particularly necessary for the website to function and is used specifically to collect user personal data via analytics, ads, other embedded contents are termed as non-necessary cookies. It is mandatory to procure user consent prior to running these cookies on your website.
SAVE & ACCEPT
1138 shares