This Paska Bread will be loved by your whole family! Paska is made with white chocolate, macadamia nuts and cranberries is a tasty update on an old classic. Topped with a glossy egg white icing glaze, with easy video instructions. Sweet, light, airy and delicious!

Paska is an Easter Bread that's popular across Orthodox countries in Eastern Europe. It's usually called Kulich in Russia. Quite often it's made with raisins, but this an updated modern recipe your whole family will love. You don't have to eat the boring old style recipe anymore! If you've never heard of Paska, it's similar to an Italian Panettone, but has its differences.

As I mentioned, Paska is popular in many countries across Eastern Europe. People turn to google to search for Easter bread recipes. Ukrainian Paska, Armenian Paska, Bulgarian Paska, Georgian Paska, Slovak Paska, Russian Paska and more. There are variations to the recipes. Some Paska's are lower with a braided decoration on top. Others have no icing, and others are tall and covered with icing. It's also popular in countries with immigration from Eastern Europe, including with Mennonites.

There is also a Russian Paskha Cheesecake that is made for Easter as well. It's made with Tvorog or Farmer's Cheese, and is not a sweet bread. It all sounds similar, and is made for Easter, but a very different recipe. Just to confuse things more, Paska is how you say Easter in Ukrainian and Paskha is how you say it in Russian. So you eat Paska Easter Bread and Paskha Easter Cheesecake at Easter (Paska), and it all sounds the same. 🤣 If you have a bread machine, check out my Kulich recipe, made with a bread machine.

There are a few different ways to make Paska. The easiest way is to buy Panettone Paper Molds that you can get at Amazon. They are single use, disposable round paper molds that you place your Paska inside to bake. Quick, easy, no fuss and no extra pans to store for the rest of the year.

Other people use tin cans. In the video, I have a Pineapple Juice can that I saved to use as a mold. Some people use metal coffee cans (not plastic). If using this method, make sure you grease the inside of the pan, I use a non-stick cooking spray. Line the base and the sides of the cans with baking paper. This makes it easy to remove without frustration.

I bought some silicon molds on Ebay which are re-usable, easy to wash, and are non-stick. I still spray them with the cooking spray, but these are super easy to use. The silicone molds have the letters ХВ raised on the inside, which rests against the dough. The ХВ stands for Христос Воскрес - Christ is Risen. It doesn't always work, and often you can't see the letters.

When choosing molds, it's up to you whether you choose paper molds, tins or silicone. The sizes and heights will vary when making Paska Bread this easter.

What Type of Flour to Use?

This might seem like a funny question, but bakers know, not all flours are created equal. Here in Australia, I use regular all purpose flour and that works great. However, many of my readers are from the USA, and many of them say the flour there has less gluten. This seems to be a common view in the Slavic communities, so they buy Canadian flour, which is similar to European flour. The type of flour does make a difference, so if in the States, use Canadian flour.

Yeast is always a funny question, because there are different types, and people have their favorites. The 3 main types are Instant Yeast, Active Dry Yeast and Fresh Yeast. They are all different strains and have slight differences, but you can use any of those in this recipe.

What Kind of Yeast for Paska?

Fresh Yeast is more common in Europe, I have a hard time finding it here in Australia. I remember my mum baking with fresh yeast. It needs to be refrigerated and doesn't last very long. It needs to be dissolved in liquid before adding it into your flour. If using fresh yeast, you usually need 3 times the amount, compared to dry yeast. So 1 tablespoon of dry yeast = roughly 3 tablespoons of fresh. There are yeast converters online if you want specifics.

Why do I proof the dough in my recipes?

There are 2 reasons why I do this, regardless of the yeast I am using. The first reason is partly due to tradition. That's how yeast dough was alway proofed before using. It's how it's always been done at our house.

The 2nd practical reason, is to make sure that the yeast is alive. Yeast doesn't live forever, not in the fridge or on your shelf. It would be a waste of time and ingredients if you mixed it all together, and the yeast was dead and it didn't rise. You'd have to throw it all out and start again with new yeast.

Finally, following my recipe is inclusive of all yeasts. 🤣 So regardless of the yeast you identify with, following this recipe will make sure you don't screw it up!

Traditionally Paska Bread is often made by adding raisins into the dough mixture. If you love raisins, then it's perfect for you. Me on the other hand? I don't love raisins. Instead of raisins, I have used other dried berries before. Dried Blueberries, Dried Blackcurrants and Dried Cranberries all were a better substitution for me.

This modern Paska recipe has been updated to reflect current flavor trends. Instead of raisins, I've added white chocolate, macadamia nuts with dried cranberries. I think everyone will love the improved flavors in this Paska recipe!

How to Make Paska Bread

This recipe is easy to make, it's just time consuming. It takes the better part of the day to make, with lots of time waiting for your sweet dough to rise. The sweet dough is super sticky, and I try not to handle it too much with my hands. I use a KitchenAid Mixmaster to mix the eggs, and then switch to the dough hook to complete the kneading.

When your dough is ready to be placed into the molds, I spray my hands with oil. The sticky dough doesn't stick to my hands, making it easy to handle. It's not a technically hard recipe to make, just follow along in the video. Just don't use Olive Oil spray, but a neutral oil, like canola or even sunflower oil. Olive Oil has too strong of a flavor profile, and you ruin your Paska.

Find a Warm Place for your Paska to Rise

You want a nice and warm place for your dough to rise. I cover the bowl with plastic wrap and a tea towel and place in the sun. It's pretty warm here in Australia at Easter, so it's easy to find a warm sunny spot by the window.

I remember my mum placing her dough near the wood stove we had burning, a nice and warm place. Other people place it in the oven on the lowest setting, and allow to rise inside the oven. This is my least favorite method, as if the oven gets too hot, it will kill the yeast. So if using that method, just monitor the temperature. Finally, don't rush the time. For best results, it will take 2 hours for the dough to rise.

Finally it takes about 30 minutes to bake your Paska, but this will depend on the size and shape of your molds or metal tins. Keep an eye on the top of the Paska so it doesn't burn. If it starts to burn, you can cover with foil to protect it. Use a wooden skewer to test that the Paska is cooked on the inside. Allow to fully cool before adding the glaze.

There are a few different way to make a glaze. Traditionally you have 2 cups of icing sugar mixed in 2 tablespoons of milk. Some people add lemon juice instead of milk, but I don't like the flavor. It's a basic glaze recipe, but a little too thin for my liking.

My Paska glaze is thicker because it's made with an egg white. Using a mixer, beat the egg white until it's fluffy and add in the icing sugar. It has a better texture to cover the Paska, and tastes better too I think. Don't skip the vanilla extract, as it tastes so good. Paska glaze should be white, and adding vanilla slightly changes the color a bit darker. It's still white, but not as stark white as plain icing sugar. The flavor trade off is worth it in my opinion.

I can also hear some people concerned about raw egg whites. They do sell pasteurized eggs, or you can pasteurize your own before making. If you have concerns or health conditions, you can use the traditional milk method instead.

Finally the glaze is topped with sprinkles. You can decorate the top with whatever you like, but move fast. The glaze sets quickly. 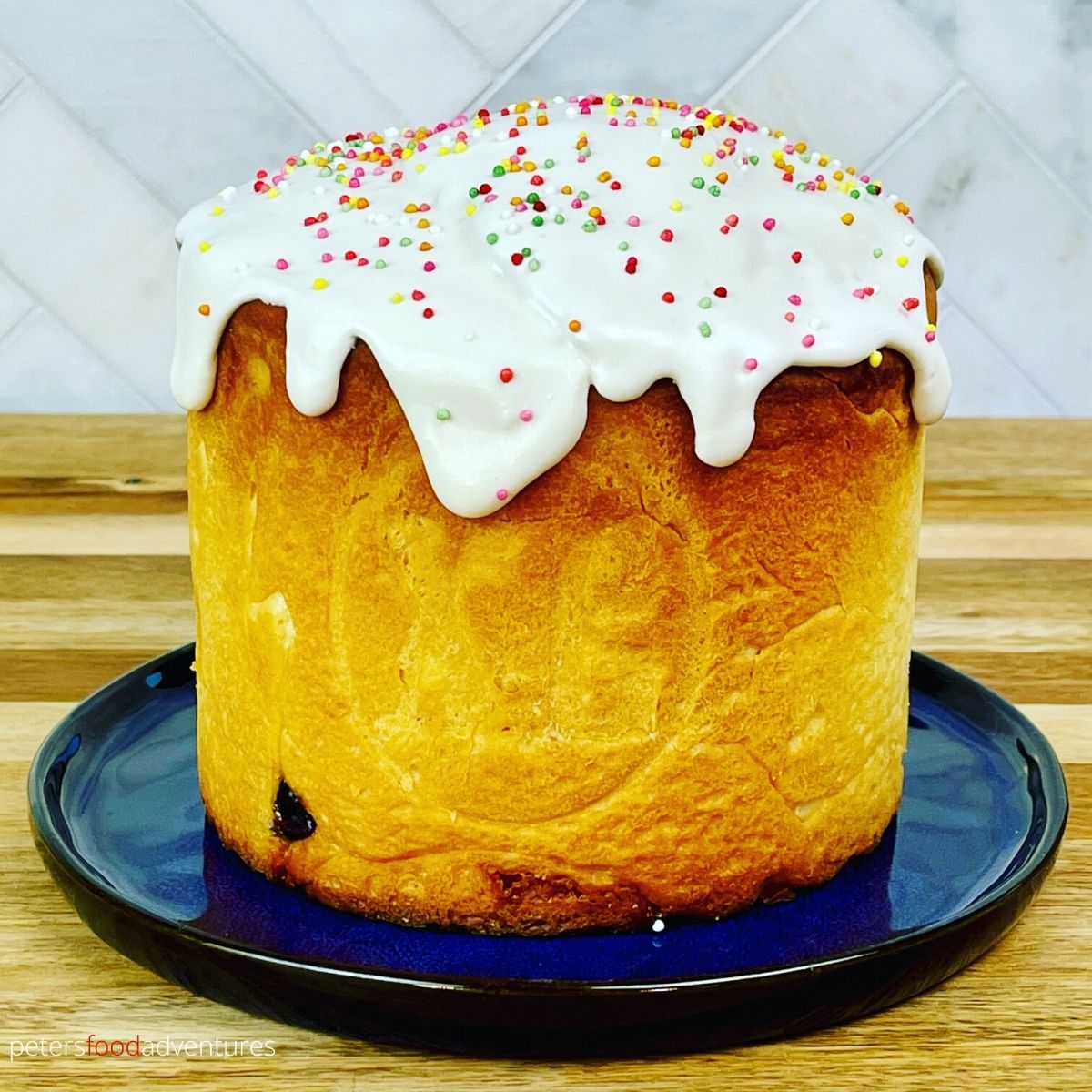 This website uses cookies to improve your experience while you navigate through the website. Out of these cookies, the cookies that are categorized as necessary are stored on your browser as they are essential for the working of basic functionalities of the website. We also use third-party cookies that help us analyze and understand how you use this website. These cookies will be stored in your browser only with your consent. You also have the option to opt-out of these cookies. But opting out of some of these cookies may have an effect on your browsing experience.
Necessary Always Enabled
Necessary cookies are absolutely essential for the website to function properly. This category only includes cookies that ensures basic functionalities and security features of the website. These cookies do not store any personal information.
Non-necessary
Any cookies that may not be particularly necessary for the website to function and is used specifically to collect user personal data via analytics, ads, other embedded contents are termed as non-necessary cookies. It is mandatory to procure user consent prior to running these cookies on your website.
SAVE & ACCEPT
1174 shares