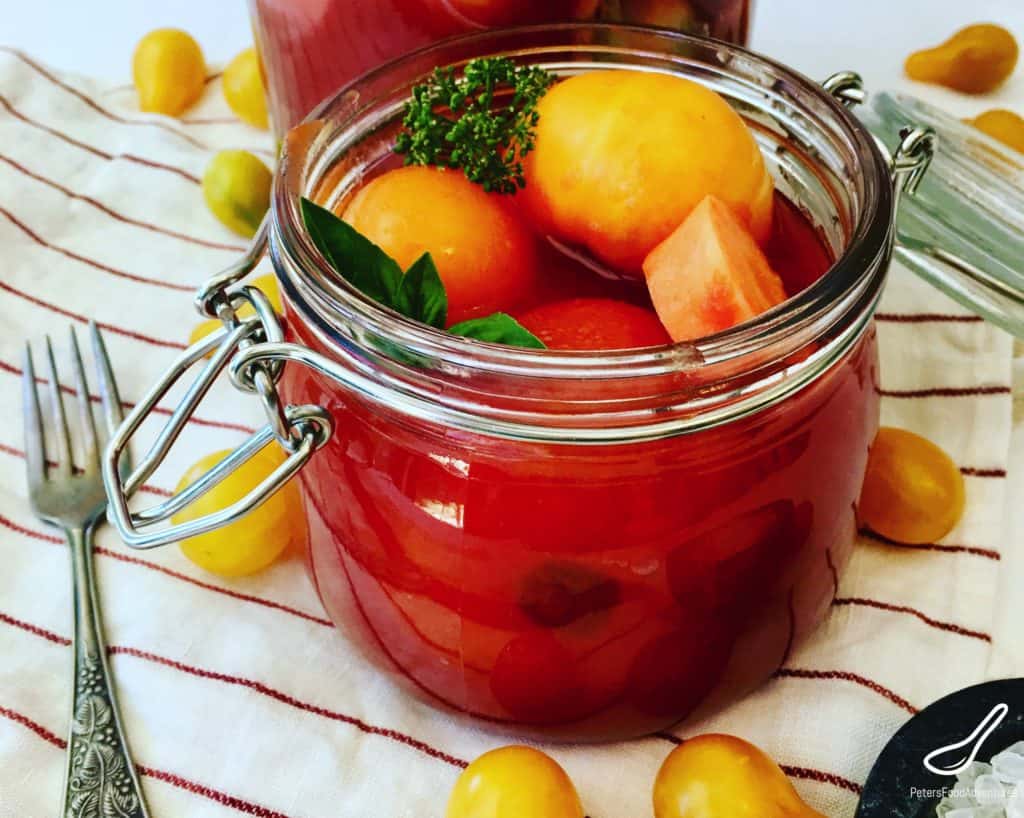 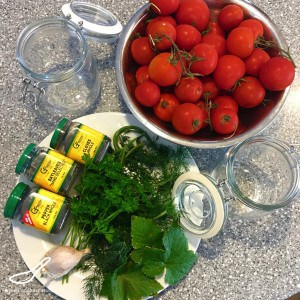 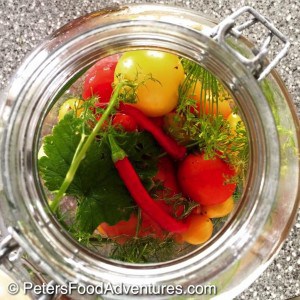 Marinated Tomatoes, my version of Russian quick pickled tomatoes (маринованный помидоры). It's an easy and delicious way to prepare tomatoes. A cross between fresh tomatoes and Canned Pickled Russian Tomatoes. This recipe needs to remain refrigerated, and gets tastier the longer it marinates.

Pickling vegetables is a staple in Russian foods. Cabbage, cucumbers, tomatoes, carrots, potatoes and garlic are all staples of the Russian diet. A salty brine is used to preserve vegetables, such as whole tomatoes for the winter. We usually make a pickled version of Russian Tomatoes. But this recipe is a fresh and tasty marinated version, bursting with flavor in every bite.

Now that I'm all grown up (which is up for debate) and have a garden of my own, and usually I have lots of ripe heirloom tomatoes. I'm always looking for recipes to use up my bounty of homegrown tomatoes. Tomatoes have to be heirloom, as the supermarket tomatoes are tasteless and not grown for their taste!

This recipe is a version of my mum's friend, Maria's pickled tomato recipe. I've known Тетя Мария my whole life, and she is an amazing cook. My earliest memories of her is cooking at the stove in church, helping the church ladies prepare a Thanksgiving feast. I'm sure this recipe is nowhere near as amazing as her recipe is! This easy marinated tomatoes are a flavor explosion, and I don't miss a tomato season without making it!

Heinz Ketchup is a surprising addition to my Marinated Tomatoes, as it has spices, sugar and vinegar in the ingredients already. It adds an easy tangy pickled taste to the tomato sauce (without the pickling). I love the flavor of cilantro, dill and basil infused with the Heinz Ketchup mixture. The longer the tomato marinates in the mixture, the stronger the flavors are. Try to leave this for one week before eating to allow time to marinate. The cilantro is the hero herb flavor in this recipe, don't be afraid to for flavor. 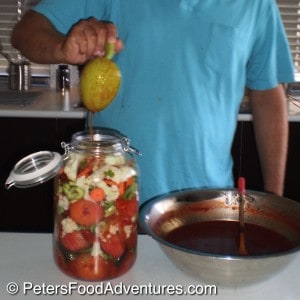 How to Use Marinated Tomatoes

I love to eat these marinated tomatoes with a Rice Pilaf or Plov. They are also great as a side dish on your plate next to potatoes, especially with heartier and heavier meals. The whole marinated tomatoes burst with flavor, it replaces a salad for me. You could use lots of small cherry tomatoes, making the tomatoes bit sized as well.

The flavors after 1 month in the fridge are absolutely amazing! (if they last that long in your fridge!). Biting into the tomatoes, they keep their 'just picked' juicy freshness, full of flavor, just asking to be mop up the sauce with crusty bread. Keep the Marinated Tomatoes refrigerated, they cannot be kept on the shelf or pantry.

I think Marinated Tomatoes is a fresher, improved version than the Pickled Tomatoes that I grew up with. I now grow my tomatoes specifically for this recipe. I've play around with the ingredients, usually adding sliced carrots and red peppers, but I have added blanched cauliflower florets or whatever vegetable is in season growing in the garden. It's like a marinated tomato giardiniera.

I can't get enough of this recipe, I'm sure you're going to love it too! Bon Appetit! Приятного аппетита! 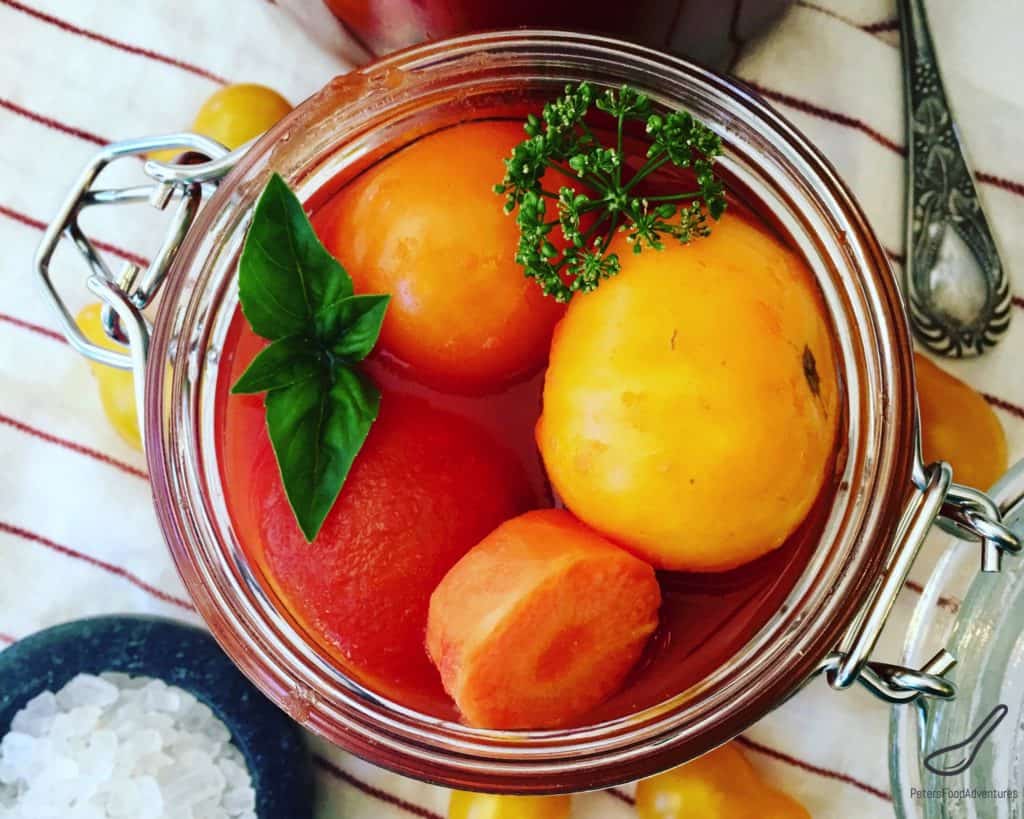 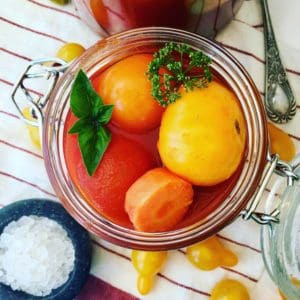 Save some of the leftover tomato sauce to top up the jar. After you fill the jar and allow to sit for 24 hours, the tomato sauce levels decrease. You want to keep the tomatoes covered in sauce.
Keyword Marinated Tomatoes 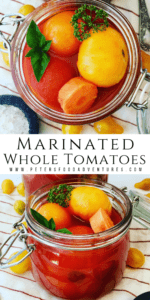 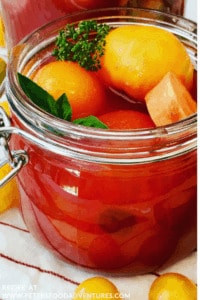