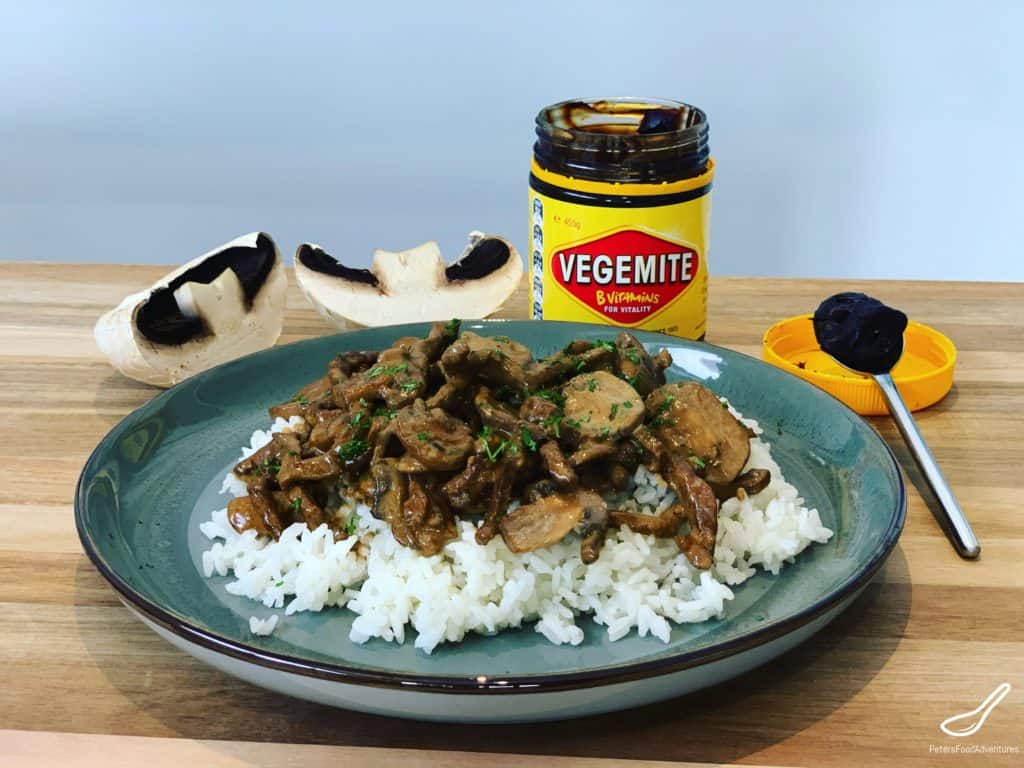 This easy Vegemite recipe is made from Australian Vegemite with Russian Stroganoff served with rice, Fusion at it's best. How can I explain Vegemite, if you have never heard of it? Vegemite is a breakfast staple in Australia, one which Aussie kids grow up on.

According to Wikipedia, Vegemite is a dark brown Australian food paste made from leftover brewers' yeast extract with various vegetable and spice additives. That was a mouthful.  It's also on the the richest sources of B vitamins, specifically thiamine. The flavour is described as salty, slightly bitter, malty and rich in umami - similar to beef boullion.

How to eat Vegemite

It's most commonly spread very, very thinly on toast, or on a cheese and Vegemite sandwich. The flavour is powerful and needs a very thinly spread. The flavour is similar to Marmite, Promite, and Cenovis. It's definitely an acquired taste, which you will either love or hate. It's funny to see Americans on YouTube, tasting Vegemite for the very first time. You're eating it all wrong! It's not Nutella or peanut butter and tastes horrible if you had a teaspoon of it, or spread it thickly on toast. Just promise me that if it's your first time having Vegemite, you'll go easy on it!

There are a many different Vegemite recipes out there. The recipe doesn't taste like Vegemite, so don't worry about that. So why do it? Because it just adds a bit some something extra, the depth of flavor, some umami. Umami in Japanese means " a pleasant savory taste" and you're gonna love it.

To make Vegemite Stroganoff, you start with Worcestershire Sauce, but it must be Lea & Perrins. which is the original creator of Worcestershire Sauce and used in Europe since the 1800's. The USA recipe is slightly different from the British recipe, as it is more sweeter, but should work the same. The British version is sold in Canada and Australia, so give it a try if you can get your hands on it.

When we first got married, this was a dish that my wife made up and it quickly became one of our family favorites. I love her Classic Chicken Stroganoff recipe, but this one is one of my favorite recipes. It's super quick to make and served over rice. Usually, by the time the rice is finished cooking, your Vegemite Stroganoff sauce is ready too.

The Vegemite adds a certain depth to the sauce. The added sugar is necessary to balance out the saltiness in the sauce. You will need to taste and adjust as required. I love this Vegemite recipe, especially the sauce drenched over the rice, an Australian twist on a Russian classic. A Vegemite recipe I hope that everyone will love. Bon Appetit! Приятного аппетита! 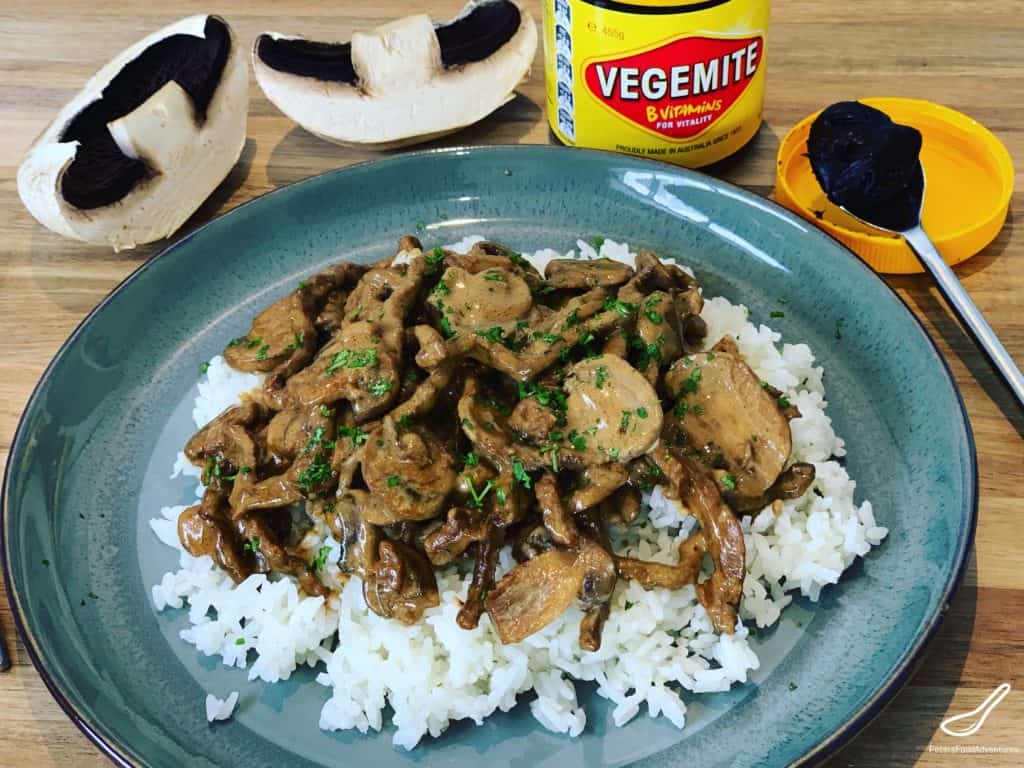 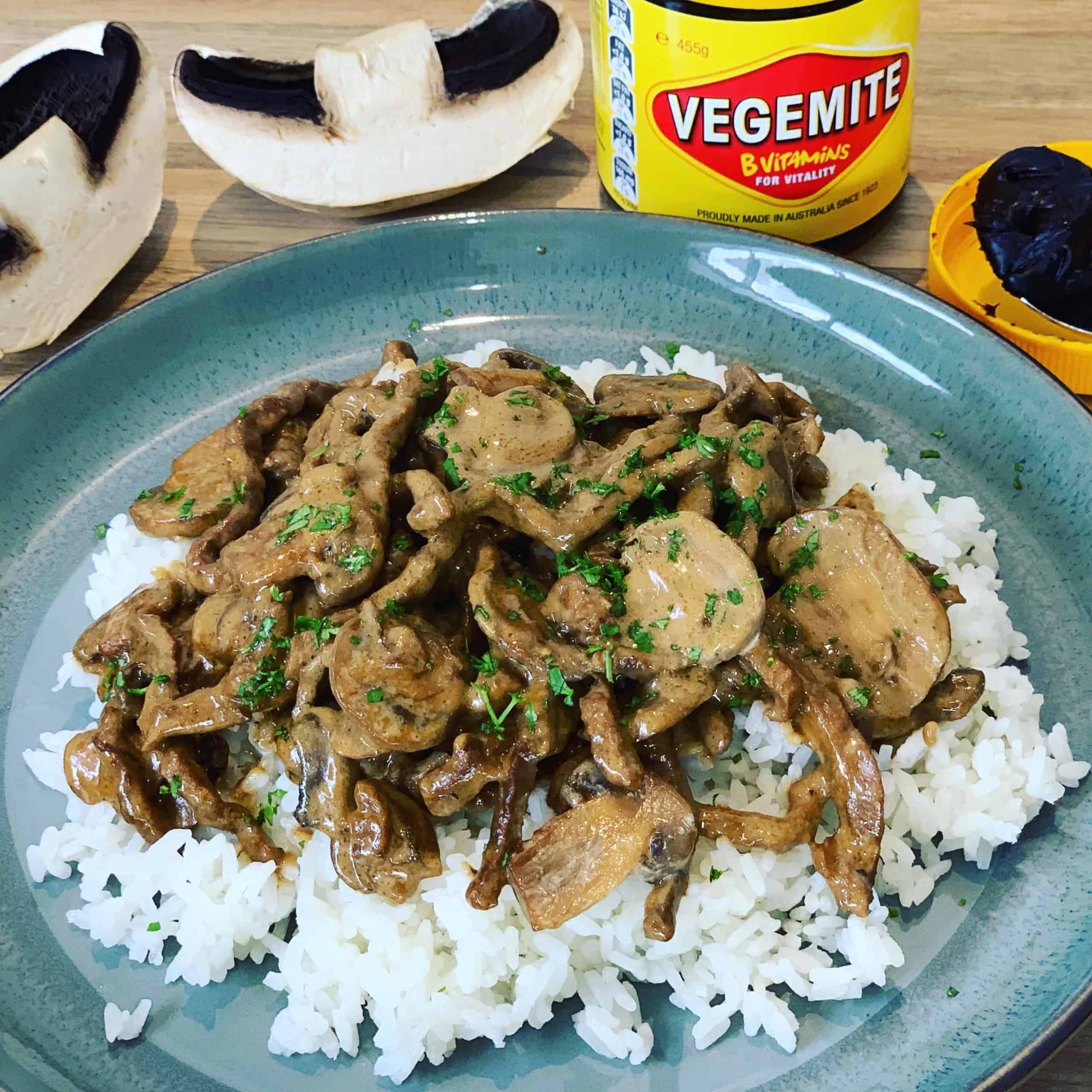 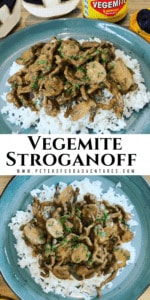 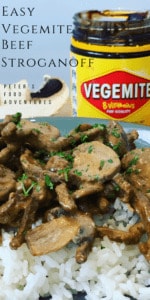 This website uses cookies to improve your experience while you navigate through the website. Out of these cookies, the cookies that are categorized as necessary are stored on your browser as they are essential for the working of basic functionalities of the website. We also use third-party cookies that help us analyze and understand how you use this website. These cookies will be stored in your browser only with your consent. You also have the option to opt-out of these cookies. But opting out of some of these cookies may have an effect on your browsing experience.
Necessary Always Enabled
Necessary cookies are absolutely essential for the website to function properly. This category only includes cookies that ensures basic functionalities and security features of the website. These cookies do not store any personal information.
Non-necessary
Any cookies that may not be particularly necessary for the website to function and is used specifically to collect user personal data via analytics, ads, other embedded contents are termed as non-necessary cookies. It is mandatory to procure user consent prior to running these cookies on your website.
SAVE & ACCEPT
209 shares