Laghman is the most amazing Central Asian dish, and most people haven't even heard of it! Not really a soup, kind of a stir fry, with hand pulled noodles to die for.

This Laghman recipe is a traditional hand pulled, stretched noodle and stir fry served by the cultures in Central Asia. An Asian noodle stir fry that sounds a bit complicated, but there are shortcuts how to make it.

The noodles are hand pulled, stretched and squeezed until they resemble the right shape. Looking at a bowl of Laghman noodles, it's hard to believe they weren't cut into strips. The vegetable beef stir fry is has a delicious tomato-y broth with Chinese Black Vinegar. It's not a soup, so resist adding too much broth. It's also not a dry stir fry, you gotta get the balance right.

Laghman is a traditional dish from the Uyghur people, which spread across the Uzbekistan, Kyrgyzstan and the surrounding regions. Uyghurs live in the Xinjiang region of Northwest China. Situated en route the Silk Road, this recipe went far and wide.

How Do I Know About Laghman?

How does a white, Russian guy, who lives in Australia know about Laghman? This recipe is from the region where my parents were born and lived. We grew up calling the recipe Leghmen, which is how it was pronounced in the Uyghur region of China where they lived.

The Kazakh and Kyrgyz pronounce it as Lagman (Лагман), which is how it's pronounced in Russian. Laghman is also known as lamian, similar to lo mein, and is thought to be of Chinese origin. This is not a Chinese recipe, although it's eaten in China and across Central Asia.

My grandparents (from both sides) fled from the Soviet Union to China for safety from religious persecution. China didn't turn communist until 1949, so they had to flee again to the west. We grew up eating so many of the flavors of the food of Central Asia and the Uyghur people. This is food my parents and grandparents ate. The other Uyghur recipe I have made is called Funchoza with Beef, but I made an Australian variation Funchoza with Chicken and Prawns.

Laghman is commonly eaten in many former Soviet countries, and across Russia. It's readily available in food courts in shopping malls from Moscow to Sochi. Many people view Russia as European (and it is) but there's also Asian Russia with many tasty food influences that aren't easily found out west.

I'm not going to lie, it's a lot of work to make any hand pulled noodles recipe. Honestly, this has been the hardest and most intimidating recipe to write. I can stir fry anything with no problems, but the making of the hand pulled noodles is daunting. As a kid, I've been lucky enough to observe how my mom makes it, and now we make it together. Carefully taking notes and photos, my son even helped pull and twist the Lagman noodles.

One of the main differences from Chinese hand pulled noodles compared to the Uyghur Hand Pulled noodles is the use of oil. Chinese noodles use flour to keep the noodles from sticking to each other, the Uyghur use vegetable oil. A totally different way of making noodles. It sounds fattening, but it all boils out in the water.

How to Make Laghman Noodles

The person pulling the noodles makes it look so easy, they twist and pull the dough into noodles. A really good cook knows how to keep the noodles even and have a consistent thickness. It's very hard to master this technique, but having irregular noodles shows that it's handmade, not machine made. There are more detailed instructions in the recipe.

The unique process in making Laghman noodles is allowing the dough to rest. Initially prep the dough into a rolled spiral of dough, about the thickness of your finger. This is oiled while you are forming the dough coil, so it doesn't stick to itself. Your hands will be oily! Then you cover with cling wrap and allow to rest for a minimum of 4 hours.

I asked mom to show how she did the coil, but she said she now uses smaller cut pieces of dough (not a coil). She said she preferred to use dough pieces that are about 8" long, as they are easier to handle than the super long pieces. She laid them side by side, all fully oiled, while they rested.

The last unique part of this process, is pulling the noodles. Holding the rope noodle strands, you gently hit them on the table, while you simultaneously stretching them. I'm trying to do justice to explain the process of a how to make something that looked so easy growing up. But as an adult, it's completely different when you want to make it for your own family.

This is important! Not everyone want to fuss with making the noodles from scratch. You can prepare the Laghman Stir Fry vegetables to serve over thick Asian noodles. They sell round, thicker Korean noodles in frozen blocks in my supermarket. They are already cooked, and just need to be dropped into boiling water to defrost.

Alternatively, Japanese Udon noodles can also be substituted instead. Really you can use any Asian Noodle if want, but please, don't use Italian spaghetti noodles!

Lagman noodles are boiled and then served with lamb, beef or chicken, but never pork, as the Uyghur are a muslim people and pork is not halal. This Laghman meat stir fry is made with a variety of vegetables. My recipe uses green beans, red peppers, tomato paste, and whatever stir fry type of vegetables are on hand.

How to Use Chinese Black Vinegar

Chinese Black Vinegar is the dominant flavor in this meal, not soy sauce. This creates a whole new dimension and category of an Asian stir fry. You can buy it at any Chinese grocer. If you look hard enough, you might be lucky to find an Uyghur restaurant. Definitely worth the effort! Most people use Black Vinegar to dip Chinese dumplings into, but I love it in a stir fry.

I took a lot of pictures, mostly for my own memory, but hopefully it can show the process a bit more clearly. Mum has no written Lagman recipe, it's all made from memory, and there's different ways to prepare.

Thanks for coming on this journey with me, my kids can't get enough of this food. I'm grateful to keep and share a part of our unique history, and to pass this Laghman recipe down to the next generation. Bon Appetit! Приятного аппетита! 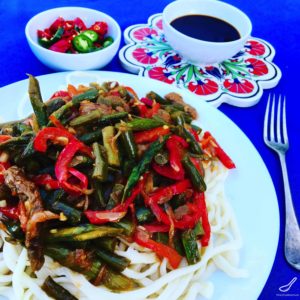 How to Make Laghman Stir Fry

How to Make Laghman Pulled Noodles