How to prepare authentic Russian Tea using the Zavarka (заварка) method. Russian tea culture uses a Samovar to brew a tea concentrate. Russians know their tea and consume among the most tea in the world! Drinking tea is more common in Russia than drinking Vodka!

Traditionally a Zavarka Russian Tea Recipe (заварка) was made using a Russian samovar, which is an early version of a Russian style brass tea kettle. Samovar translates to self boil which traditionally the water was heated from coal or charcoal.

The Zavarka tea concentrate brewed on top of the samovar in a small teapot. Obviously there are now electric versions of a samovar, and the regular tea kettle. But the process for making Russian Tea Zavarka is the same.

How to Brew Russian Tea

What makes this Zavarka Russian Tea Recipe (заварка) different from the English tradition of drinking tea? The Zavarka is the strong tea concentrate made with loose leaf tea . It's then diluted with kipyatok (кипяток) which is boiling hot water. The dilution allows the drinker to control the strength of their tea. Fill about a quarter of your cup with the brewed Zavarka tea, and top up the rest with hot water (kipyatok). Adjust strength according to your taste.

Do I Need A Samovar to make Russian Tea?

Absolutely not! This is the way it was traditionally made in the olden days. I ordered my traditional Russian Samovar from eBay, and it arrived from Bulgaria. It still has the Czar's Royal Stamps on them, which is super cool. But this is mostly a decoration. When I make Zavarka, I use a regular kettle, place the looseleaf tea in a small teapot to allow it to steep. When it's done, the zavarka is ready to use!

Russians love drinking tea, and consume 3 pounds of tea per person a year! That is a lot of tea leaves! In comparison to the United States, they consume about ½ pound of tea per person. That might surprise people, as Vodka is often associated with Russians, but not all Russians drink Vodka! I know, I'm breaking stereotypes, but stay with me!

Drinking tea is a very social Russian and Slavic thing to do. You invite people over for tea (чай), and sit, talk and drink tea for hours. Usually while eating baked sweets сдобное like my Russian Blueberry Pie, or with spoonfuls of jam between sips. Making Zavarka ensures the tea concentrate keeps getting topped up with more kipyatok. The tea and conversation goes a long way.

Zavarka is a very concentrated strong brew, and shouldn't be drunk without dilution. I'm sure the amount of caffeine would definitely send your heart racing. Always use a quality loose leaf tea, instead of tea bag (which are considered floor sweepings from the tea factory). That might sound snobby, but trust me! The quality and flavor of loose leaf tea is superior, and I find doesn't get bitter from the tannins the longer it sits. When people use teabags, many squeeze it when removing from the teapot. This releases bitter tannins, and ruins your tea. Use tea leaves!

When making a Zavarka, it's usually made with any black tea, and sometimes sweetened with a teaspoon of jam. Russian Caravan Tea mimics the original smokey flavor of long journey the tea took to get to Russia, but any quality loose leaf tea works beautifully.

Why do Russians Drink Tea with Lemon?

Usually tea is either enjoyed with milk and sugar, or sometimes without adding anything to it at all. In Russia, it's also common to serve tea with a small slice of lemon. This dates back to the 18th and 19th centuries where tea with lemon was offered to travellers to help with motion sickness. Also, the extra Vitamin C didn't hurt!

When drinking black tea with lemon, you don't add any milk. It's served black, with added sugar or honey if preferred. It's really a great way to enjoy tea, I highly recommend it!

Finally, this traditional Russian Tea Recipe has nothing in common with an American invention called Russian Tea, a citrus based spiced tea popular during the holidays. You can see the link of citrus with black tea, however, American commonly make it with Tang powdered drink. I have re-created the American Russian Tea using real citrus ingredients, if you want to check that out too!

I love both styles of tea, but I drink zavarka almost everyday. What's your favorite way to drink tea? Bon Appetit! Приятного аппетита! 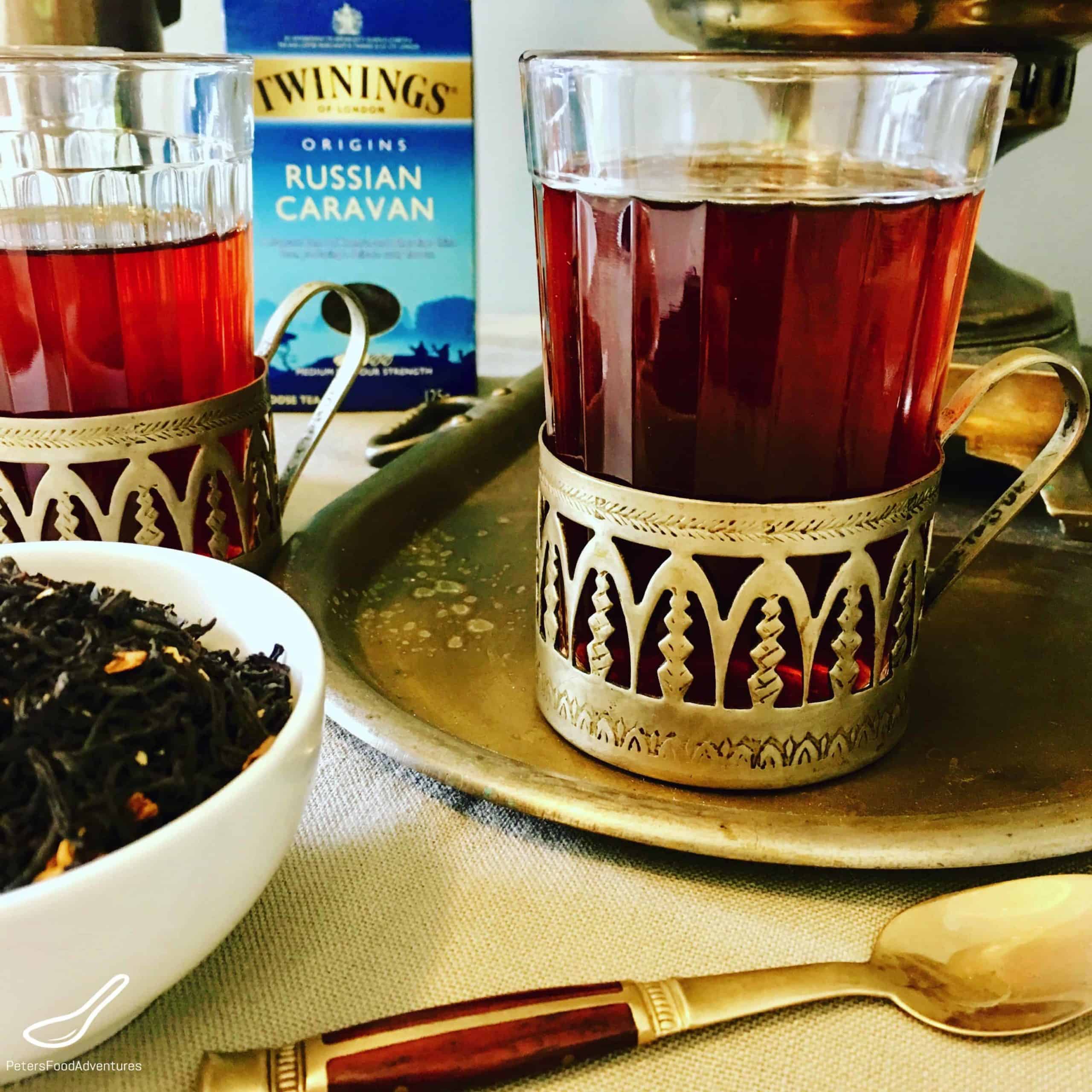 This website uses cookies to improve your experience while you navigate through the website. Out of these cookies, the cookies that are categorized as necessary are stored on your browser as they are essential for the working of basic functionalities of the website. We also use third-party cookies that help us analyze and understand how you use this website. These cookies will be stored in your browser only with your consent. You also have the option to opt-out of these cookies. But opting out of some of these cookies may have an effect on your browsing experience.
Necessary Always Enabled
Necessary cookies are absolutely essential for the website to function properly. This category only includes cookies that ensures basic functionalities and security features of the website. These cookies do not store any personal information.
Non-necessary
Any cookies that may not be particularly necessary for the website to function and is used specifically to collect user personal data via analytics, ads, other embedded contents are termed as non-necessary cookies. It is mandatory to procure user consent prior to running these cookies on your website.
SAVE & ACCEPT
279 shares