Watermelon Jam (Варенье из арбуза) is a jam that was enjoyed across the Soviet Union, especially popular in watermelon growing regions in Central Asia.  Jams are so popular in the Russian culture. There is even a jam made from watermelon rind, or a jam made from small pine cones which is healthy to eat when you are sick with a cold.

What is Watermelon Jam?

Watermelon Jam is not easily found in the west, definitely not a staple in our grocery stores. Most people I know have never heard of the concept of watermelon jam, or if they have, it's not real jam and filled with pectin. Homemade seems to be your only option if you want to try it.

You're going to either love it or hate it, I think that's the only way I can describe it. This doesn't taste like fresh watermelon, but a more caramelised honey version, that is cooked down and caramelized over many hours.

Jams of all sorts are very popular in Russia, and usually eaten by the spoonful with a cup of tea. Russian jams tend to be more runnier than the jams we buy here, and usually have small chunks of fruit through it. It's definitely not a pureed jelly style of jam, although you could make it that way.

You can use a seedless watermelon for this recipe, however I believe that the old fashioned heirloom watermelons with seeds have more flavour. This required a bit more work to take the seeds out.

The method of making this jam doesn't use pectin or any thickeners. I've read other watermelon jam recipes that simply puree the fruit and add pectin, but that's not real Russian watermelon jam.

This recipe doesn't taste like a watermelon Jolly Rancher, but more of a caramelized honey type of watermelon flavor. It's more of a Watermelon Honey, if there was such a thing, but not in the traditional sense of honey. This recipe method requires to heat and cool the watermelon several times, but it's worth the effort. Don't speed up the cooling by putting it in the fridge, it needs to cool naturally. It's gonna be an all day affair.

Watermelon Jam is a delicious jam that will bring back memories of your childhood if you're Russian. Or if you've never tried this and are feeling adventurous this summer, give this watermelon jam recipe a try. Bon Appetit! Приятного аппетита! 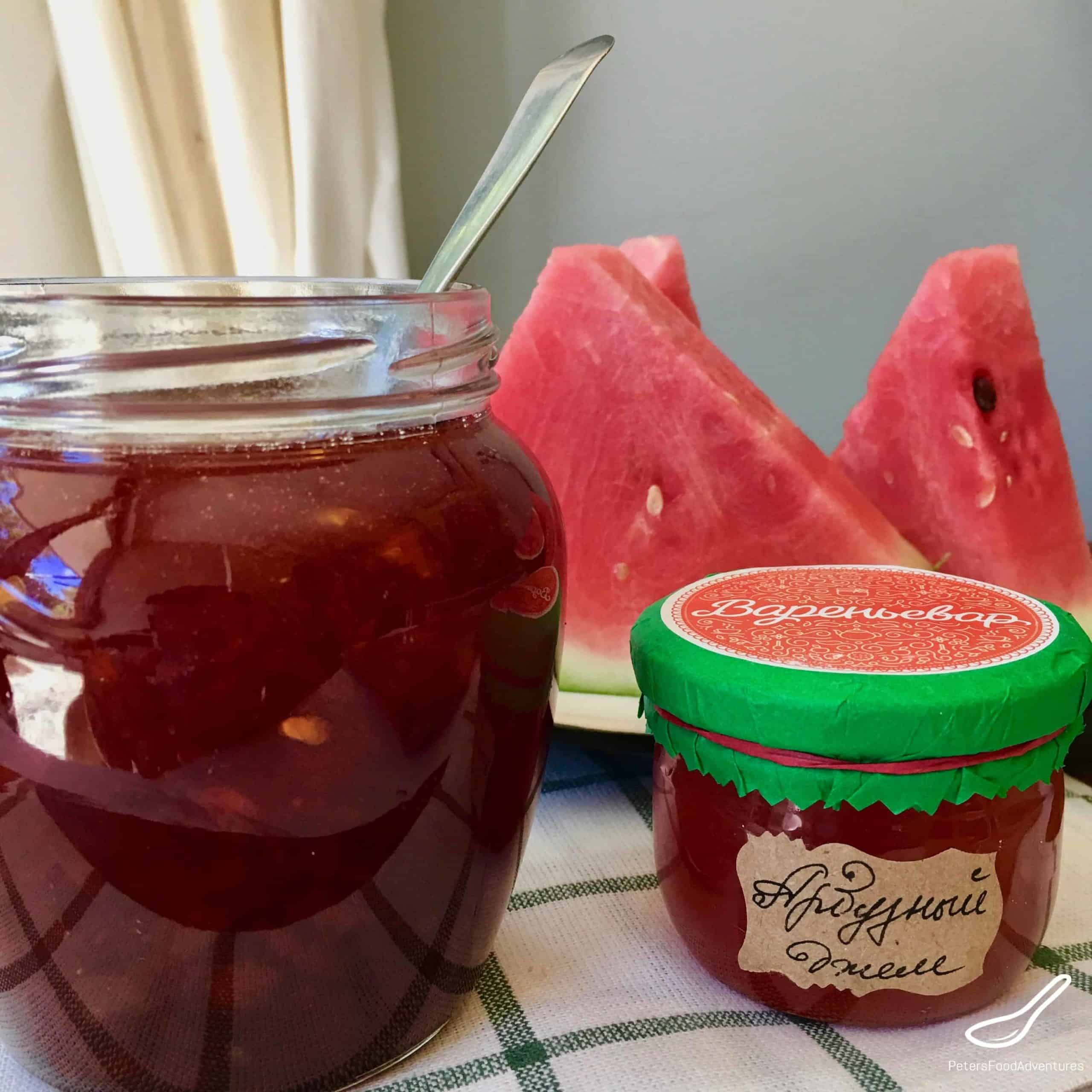 The cook time doesn't include the time to cool down your watermelon. Don't try to speed up the process by putting it into the fridge. This will interfere with the melted sugars and could cause your jam to crystallize.
Tried this recipe?Mention @petersfoodadventures or tag #petersfoodadventures!

This website uses cookies to improve your experience while you navigate through the website. Out of these cookies, the cookies that are categorized as necessary are stored on your browser as they are essential for the working of basic functionalities of the website. We also use third-party cookies that help us analyze and understand how you use this website. These cookies will be stored in your browser only with your consent. You also have the option to opt-out of these cookies. But opting out of some of these cookies may have an effect on your browsing experience.
Necessary Always Enabled
Necessary cookies are absolutely essential for the website to function properly. This category only includes cookies that ensures basic functionalities and security features of the website. These cookies do not store any personal information.
Non-necessary
Any cookies that may not be particularly necessary for the website to function and is used specifically to collect user personal data via analytics, ads, other embedded contents are termed as non-necessary cookies. It is mandatory to procure user consent prior to running these cookies on your website.
SAVE & ACCEPT
577 shares