What is Veal Orloff?

Veal Orloff is a Russian dish that was created by a French chef employed by Prince Orloff in the 19th century. So, kind of a French recipe, embraced by Russians. The original traditional recipe is a complicated recipe with sliced braised veal, onions and mushrooms, re-assembled, which is covered in Mornay Sauce.

The most famous Veal Orloff recipe people recognize is made by Julia Child, and was more popular in the 1960's. In popular culture, The Mary Tyler Moore show served Veal Prince Orloff in the classic episode "The Dinner Party".

Not to get anybody too excited, this isn't the original Veal Orloff recipe. It's the easy modern Russian interpretation, and a very loose one at that. It's like a Russian Casserole. The French don't drown all their food in mayo for starters, but this is the name, for better or worse! For a more accurate representation of the original Orloff recipe, see Jennifer Eremeeva's veal recipe. Jennifer is an amazing cook, an American that's a Russian expert, and has lived in Russia for over 2 decades. Definitely worth checking out.

Veal Orloff is translated as French-style meat in Russian (мясо по-французски). And there are a few differences. It's almost like a meat and potato casserole with lots of mayonnaise. Russians love mayonnaise on everything. Check out my Shuba Salad recipe with the layers of mayo, we can't get enough of it!

For this recipe, I usually use a lasagna glass baking pan, you know the one, we all have one! You layer sliced potatoes, onions, mayo, veal, mushrooms, onions, more mayo before topping with cheese. That's the gist of a modern Russian Veal Orloff. Easy to make and delicious. My recipe uses Garlic Aioli Mayo which adds an amazing flavor to the potatoes. This is not a low fat recipe, and you could limit the mayo, and some people leave it out completely. I don't recommend it, as it doesn't taste as good!

There are many different ways that Russians make French-style meat. They all contain a layer of potato, onions, mayo and meat. It doesn't have to be veal. Quite often pork is used. If buying steaks, they need to be pounded with a meat tenderizer until they are about ¼" thick. I usually buy thin steaks or beef schnitzels they sell in grocery stores. Some people use chicken piece as well.

The other difference I've seen is how the ingredients are layered. Some people start with the meat on the bottom, adding potatoes and onions, before topping with mayo and cheese. I prefer my method better, as the meat cooks, the dripping flavors fall onto the potatoes. There is no right or wrong way.

I've even seen the potatoes grated instead of cut into small pieces. If you potatoes are cut too thick, they will not cook and taste a bit "al dente". When spreading the mayo, it can be a bit awkward. Some recipes mix the mayo and onions together which is supposed to make it easier to spread. I find that isn't always the case. Some recipes add sliced tomatoes on top of it all, but I think that's weird. As I said, there is not right or wrong answer!

What I wouldn't skip is the Garlic Aioli Mayo. This really packs a great flavor kick, and you could even experiment with many different flavored mayos that are available. I've even tried it once with a spicy Peri Peri Garlic Mayo which was delicious too! You could also caramelize the onions in advance for a richer flavor before layering in the casserole. A final tip, if your meat pieces are thicker, they will need more time in the oven to cook.

When photographing this recipe, I used a fancier baking pan because it's so hard to photograph a casserole type dish. I'm hoping you're distracted by the pretty baking pan.

This Russian version of Veal Orloff or French-style meat is not well known outside of Russia. A delicious meat and potato casserole style dinner your whole family will love. Bon Appetit! Приятного аппетита! 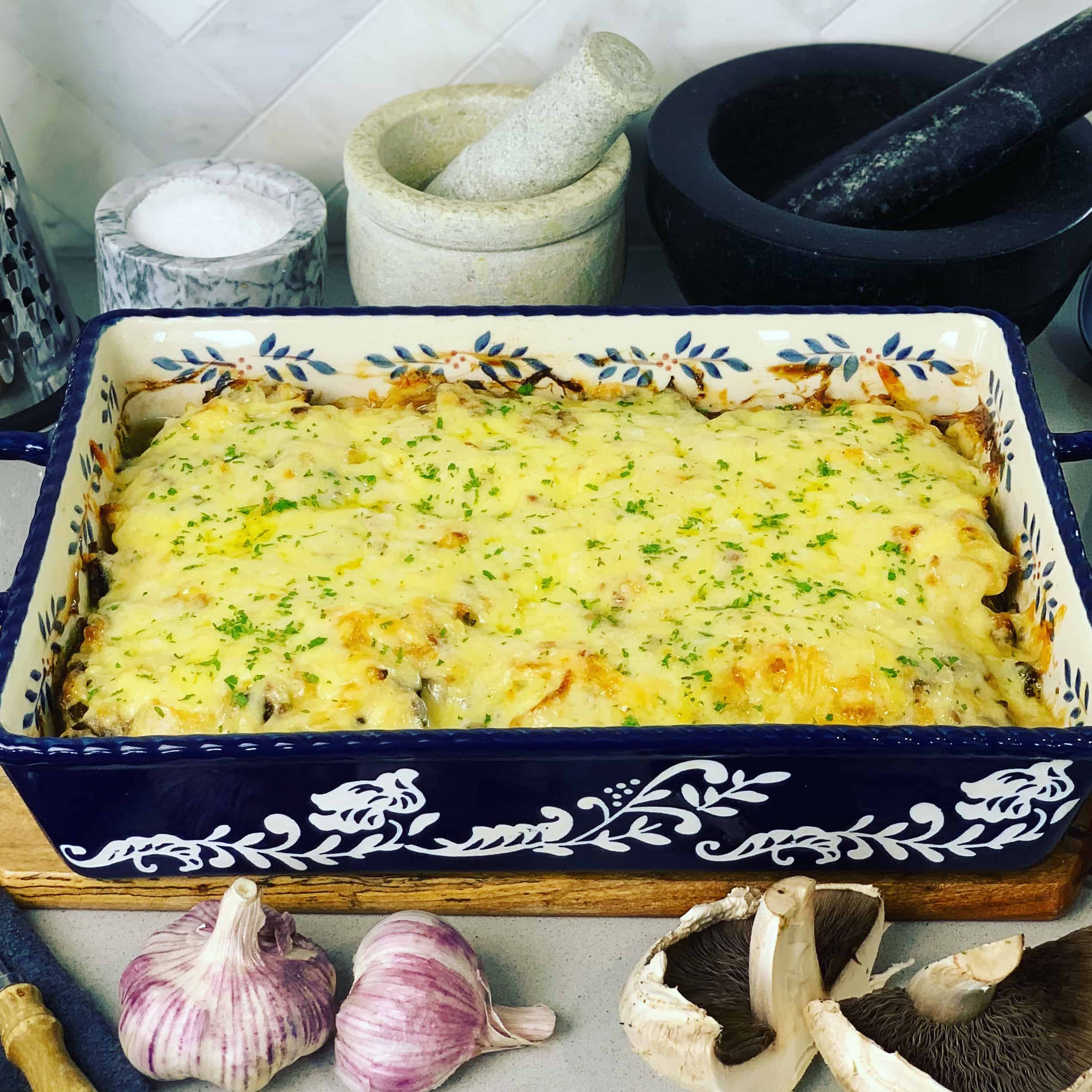 This website uses cookies to improve your experience while you navigate through the website. Out of these cookies, the cookies that are categorized as necessary are stored on your browser as they are essential for the working of basic functionalities of the website. We also use third-party cookies that help us analyze and understand how you use this website. These cookies will be stored in your browser only with your consent. You also have the option to opt-out of these cookies. But opting out of some of these cookies may have an effect on your browsing experience.
Necessary Always Enabled
Necessary cookies are absolutely essential for the website to function properly. This category only includes cookies that ensures basic functionalities and security features of the website. These cookies do not store any personal information.
Non-necessary
Any cookies that may not be particularly necessary for the website to function and is used specifically to collect user personal data via analytics, ads, other embedded contents are termed as non-necessary cookies. It is mandatory to procure user consent prior to running these cookies on your website.
SAVE & ACCEPT
313 shares