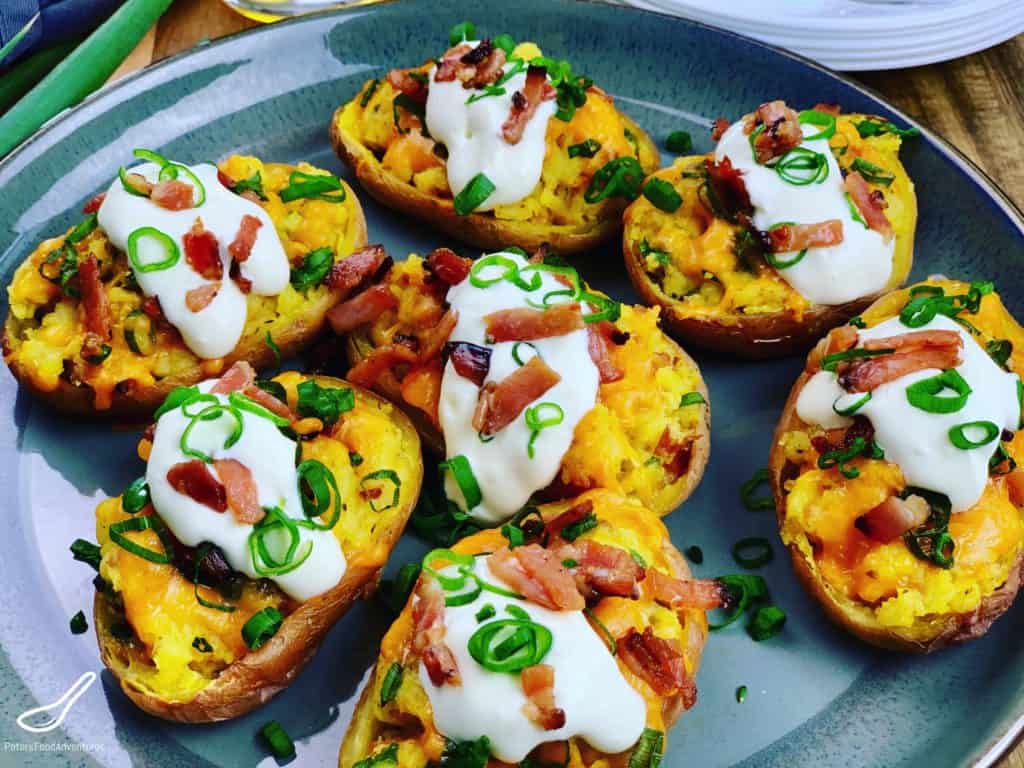 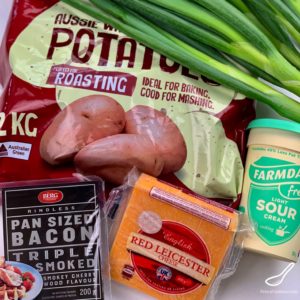 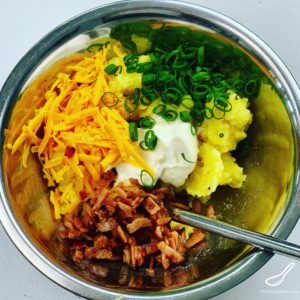 I haven't met a person yet who doesn't love a Twiced Baked Potatoes recipe. It's a classic side dish that's popular as an appetizer, at Super Bowl or parties and picnics.

I remember making these when we first got married over 20 years ago. My wife loves anything potato, I'm sure that's her major food group. It was such an easy recipe to make, the perfect appy when we had company coming over. It was one of the first recipes that we cooked together as newlyweds. This is the best bacon and cheesy stuffed potato recipe!

Can you microwave baked potatoes?

Of course, this is the big recipe time saving trick. Technically they wouldn't be twice baked potatoes, but microwaved baked potatoes, but the idea is the same. It will take you about an hour to bake the whole potatoes in the oven. Popping them into the microwave for about 15 minutes gives you the same result.

I don't usually microwave baked potatoes if they are used a a side dish for dinner, as I think the texture isn't the same as traditional baked. However, it works perfectly when making twice baked potatoes. You scoop it out and mix with ingredients before stuffing the potato shell and baking again. It's a definite time saver.

There are many different ways to make baked stuffed potatoes. My recipe uses Cajun spice as a way to flavor the potatoes. Sometimes I add French's Crispy Jalapeños into the mix to give it some heat. If you don't like to add an spices, you can make it with just plain salt and pepper. Another popular recipe is to make Twice Baked Potatoes with Ranch. Instead of adding sour cream into the potato mix, use ranch dressing. Tastes even better with homemade Ranch dressing! Sometimes I also use homemade Blue Cheese Dressing as a flavor hit to the potato mixture. 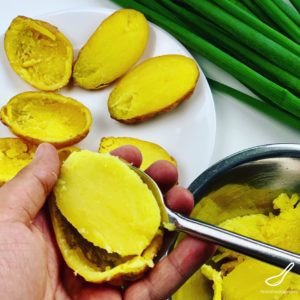 Can Twice Baked Potatoes be made in Advance?

Potatoes are so easy to make in advance. This recipe can even be frozen and still taste delicious. Just don't add the green onions if you are freezing the potatoes as frozen green onions change the flavor, not in a good way. Plus green onions always look and taste better fresh. Just prepare the recipe as usual and pop into the freezer. It's that simple. Alternatively they can be kept in the fridge for a few days in advance. Just reheat and serve.

This is a Twice Baked Potatoes for 4 recipe, because I am assuming that each person will eat a single potato (2 halves). You could easily double the recipe and hope for leftovers. They reheat easily in the oven or microwave. Here in Australia, American orange cheddar cheese is hard to find. Yes, the orange cheddar in the USA is dyed and not made the same way worldwide. I use a British cheese called Red Leicester, which works perfectly as a substitute.

Twice Baked Potatoes is one of my favorite appetizers. Creamy, cheesy, with cajun spice and bacon. So easy to make, your kids can even make them.  Bon Appetit! Приятного аппетита! 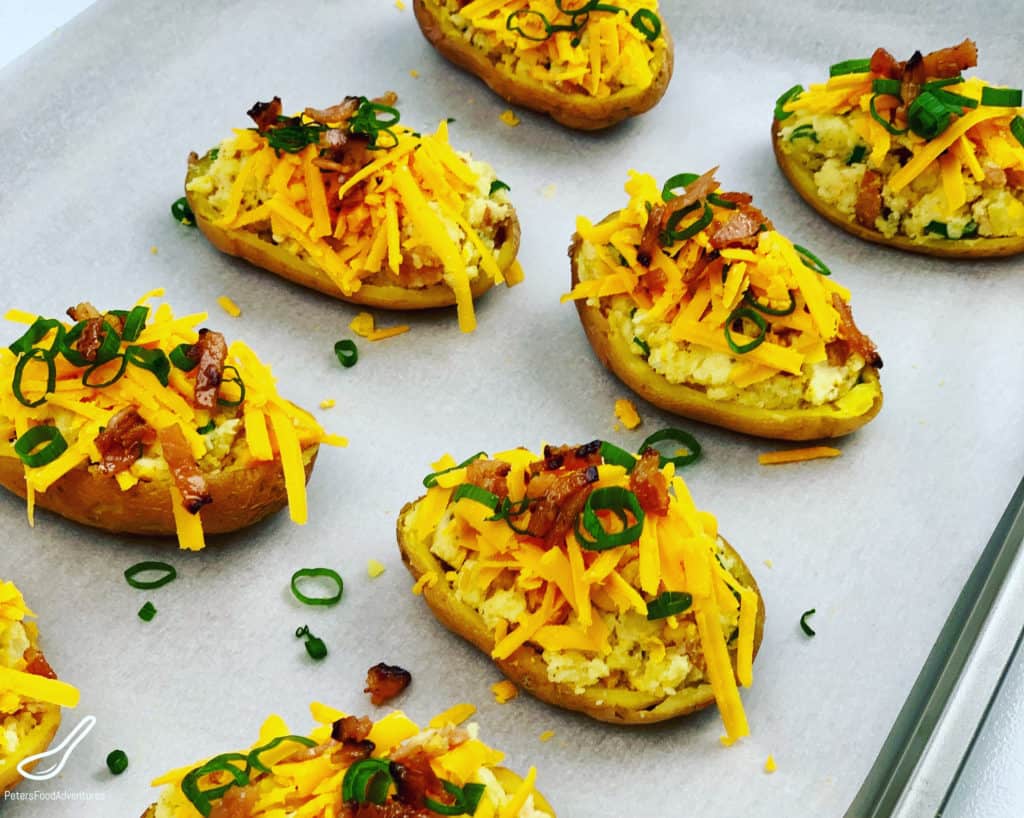 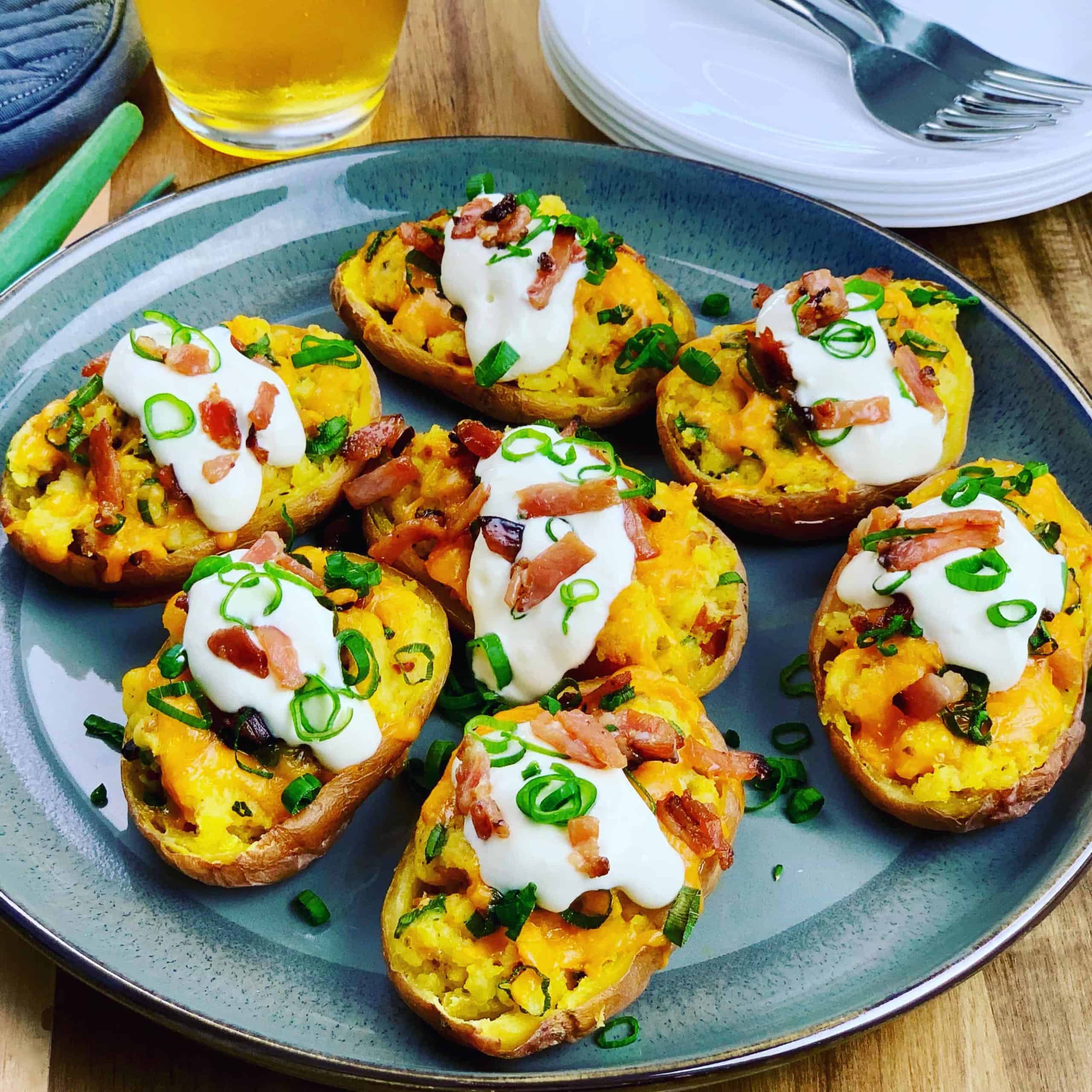 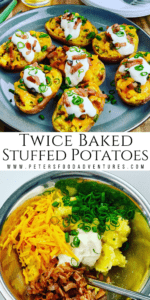 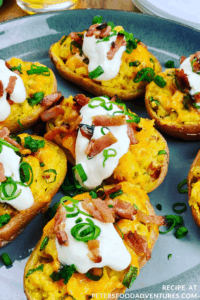 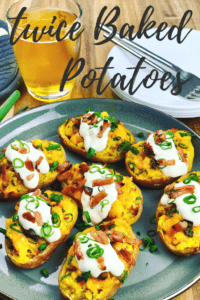 This website uses cookies to improve your experience while you navigate through the website. Out of these cookies, the cookies that are categorized as necessary are stored on your browser as they are essential for the working of basic functionalities of the website. We also use third-party cookies that help us analyze and understand how you use this website. These cookies will be stored in your browser only with your consent. You also have the option to opt-out of these cookies. But opting out of some of these cookies may have an effect on your browsing experience.
Necessary Always Enabled
Necessary cookies are absolutely essential for the website to function properly. This category only includes cookies that ensures basic functionalities and security features of the website. These cookies do not store any personal information.
Non-necessary
Any cookies that may not be particularly necessary for the website to function and is used specifically to collect user personal data via analytics, ads, other embedded contents are termed as non-necessary cookies. It is mandatory to procure user consent prior to running these cookies on your website.
SAVE & ACCEPT
455shares