What is Tom Kha Gai?

If you've never had Tom Kha Gai Soup before, this is where you need to start. It's known as Thai Coconut Chicken Soup is one of the more famous soup recipes from Thailand. It's a delicious spicy and sour soup made with all the Thai staples you would expect: lemongrass, fresh ginger, chilli, lime and coconut milk. It's one of my wife's favorite dishes. This coconut soup recipe is one we make often when we are in a hurry, but still need to feed the family a real nutritious meal.

If you've never had a savory coconut milk meal, you're in for a treat. Many people think of Pina Colada when they hear coconut milk. However, Coconut Milk is a staple in Asian cooking.

What does Tom Kha Gai mean?

The Thai word Tom refers to the boiling process, such as the soup. Kha means galangal in Thai, which is a rhizome similar to ginger, but it taste more piney and citrusy. It's hard to find, but I have more about that below. Gai means Chicken. All together it translates to Chicken Galangal Soup - but often referred in English as Thai Coconut Soup.

I love how this Tom Kha Gai Soup recipe is quick and easy it is to make. The 'easy' part of this recipe is using a supermarket rotisserie chicken. It's cheap and easy to buy a whole chicken and to shred the meat for this soup. Using store bought chicken saves you time, instead of chopping raw chicken breast and frying it. You cold also use homemade roast chicken if you prefer.

As much as I prefer to make my stock from scratch (usually in an Instant Pot), sometimes life happens and you need to make a meal in a hurry. Using stock from Campbell's soup works great in a pinch, and it's always ready to use on the pantry shelf. After a long day of work, I don't always have time to make and elaborate dinner. This is a tasty and nutritous meal, that you can quickly throw together in about 30 minutes.

This recipe incorporates classic Thai flavors, such as lemon grass, ginger, garlic, fish sauce and cilantro. I love the flavor cilantro gives in Thai cooking, but not everyone loves cilantro. Some people say it tastes like soap, apparently up to 10% off the population. There are some genetic factors that cause it, but I love the flavor cilantro brings to this soup . If you hate cilantro, then leave it out of the recipe.

Traditionally, Tom Kha Gai Soup has galangal root in it, which is in the name, Thai Galangal Soup. It's sometimes hard to find galangal, and it's definitely not in my fridge.

Galangal looks like ginger, but it tastes very different. It has a bit of a piney flavor, and it's the essence of this soup. Most likely, you will need to find it in an Asian store. You don't need a lot of Galangal, only 3 tablespoons, thinly sliced.

Because it can be hard to find, this recipe is written with that in mind. You can skip the galangal if you can't find it. It sounds crazy to make a soup without the key ingredient that's in the name of the soup. It's a westernized version that's meant to be made quickly for dinner. Even without using galangal root, this Easy Tom Kha Gai recipe has amazing, authentic Thai flavors.

I usually have most of these ingredients I need for this in the fridge, because we love Thai food. You will need to buy some Thai ingredients, like lemongrass, fish sauce, palm sugar, galangal and canned coconut milk. I buy tubes of fresh lemongrass and ginger paste, which last longer in the fridge, and always have lime juice in the fridge.

Start by frying the aromatic herbs and spices in oil for about 2 minutes. Add the coconut milk and chicken stock with fish sauce and palm sugar. Let simmer for about 5 minutes and serve with fresh greens. Cooking with 3 Thai chilli peppers can be too spicy for some, make sure you carefully de-seed them, and cut down to 1 chilli pepper, if you need a family friendly soup.

This delicious and easy Tom Kha Gai Soup (Thai Coconut Soup) with authentic flavors is perfect when you need to make dinner in a hurry. It makes an exciting change from regular soups, travel to Thailand without living home. Bon Appetit! Приятного аппетита! 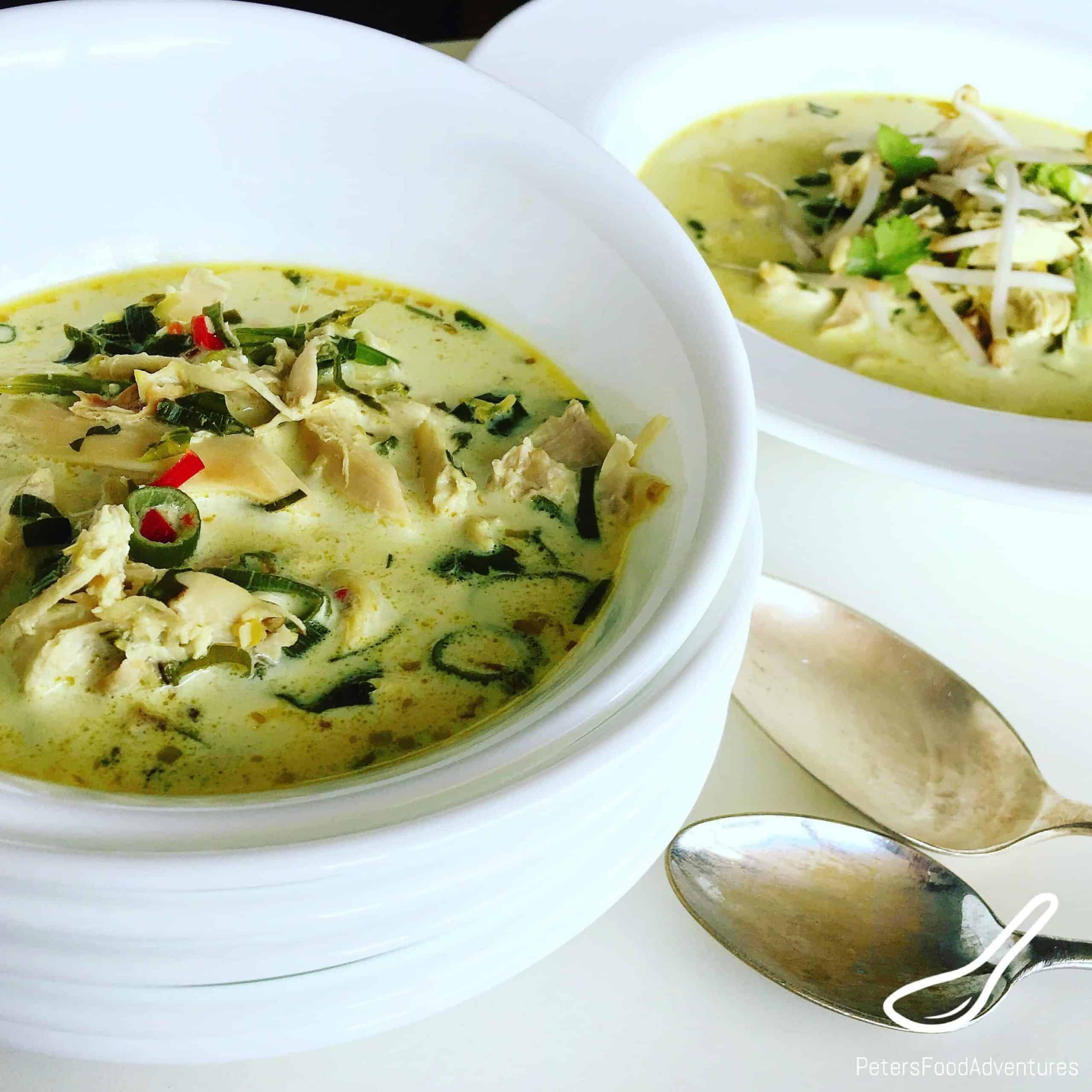 « Russian Tea Made From Scratch!
Salt and Pepper Shrimp »

This website uses cookies to improve your experience while you navigate through the website. Out of these cookies, the cookies that are categorized as necessary are stored on your browser as they are essential for the working of basic functionalities of the website. We also use third-party cookies that help us analyze and understand how you use this website. These cookies will be stored in your browser only with your consent. You also have the option to opt-out of these cookies. But opting out of some of these cookies may have an effect on your browsing experience.
Necessary Always Enabled
Necessary cookies are absolutely essential for the website to function properly. This category only includes cookies that ensures basic functionalities and security features of the website. These cookies do not store any personal information.
Non-necessary
Any cookies that may not be particularly necessary for the website to function and is used specifically to collect user personal data via analytics, ads, other embedded contents are termed as non-necessary cookies. It is mandatory to procure user consent prior to running these cookies on your website.
SAVE & ACCEPT
315shares