Zucchini Boats are zucchinis that are sliced in half, usually stuffed with meats and then baked in the oven. It's a tasty and fun way to enjoy zucchinis.

Typically need a large zucchini to start. They don't sell giant zucchinis in stores for some reason. I suppose it's for commercial reasons, and they aren't as tender as small zucchinis. We grew up with zucchinis of all sizes, they grow so fast! I was excited to have a large zucchini growing in the garden. You might be able to buy them at a local farmer's market, but they are so incredibly easy to grow!

A full grown zucchini or courgette is called marrow, which are also known as squash, courgette, summer squash, pattypan squash, so many names! You can use any of these, regardless of shape. Just cut them and half, and you're ready to go!

The first thing I think about when stuffing a large zucchini, is a classic meat loaf. This is like a Thai meatloaf. I'm on a Thai flavor kick, and incorporated it into a zucchini boat with ground beef recipe. This recipe is definitely not traditional Thai food, but very much Thai flavoured. The ginger and garlic, with cilantro, lime, chilli, and the secret to this dish, Thai Sweet Chilli Sauce. So good together!

What about the bacon on the Thai Zucchini Boats? No, not Thai at all, but oh so good when it caramelises at the end, oozing in a sticky Sweet Chilli Sauce, almost like a candied bacon.  Plus the bacon protects the meat from drying out, while adding a delicious flavour. Doesn't everything taste better with bacon? 🤣

To get started, slice a jumbo zucchini boat in half and scoop out the seeds and filling, creating a boat. Fry vegetables until they are caramelized. Then prepare the vermicelli noodles. Don't buy a rice vermicelli, but a bean vermicelli, as it holds its shape better. This recipe only needs a little bit, overcome the temptation to add more, because it will cause the meat to lose its shape.

In a bowl, mix the ground beef with the fried vegetables, vermicelli and herbs. Fill the Zucchini boats with the thai beef mixture. Cover with bacon and Sweet Thai Chilli Sauce before baking. You can skip the bacon from this recipe, but my suggestions is that you give it a try, you'll probably like it!

You'll Love These Recipes with Zucchini 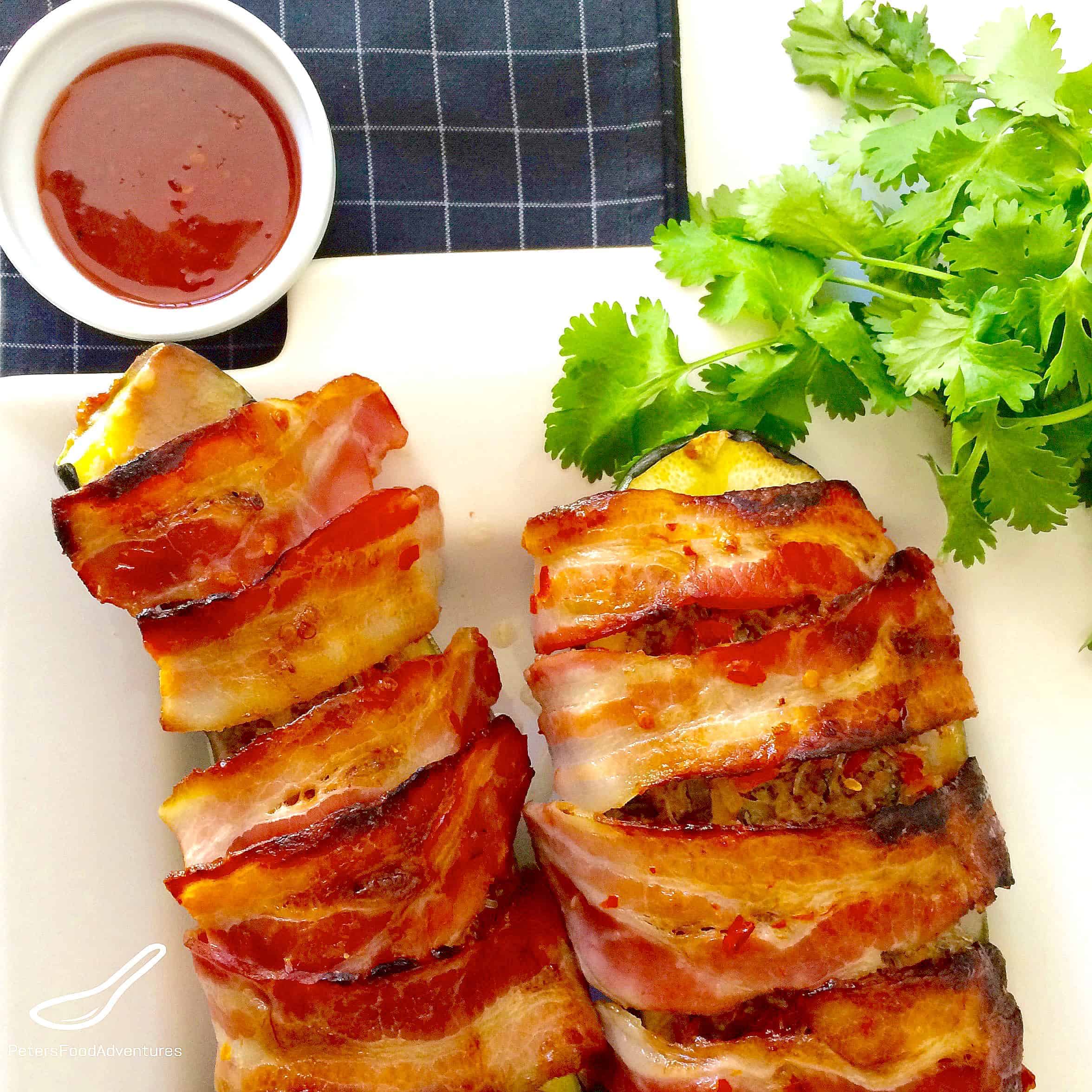 This website uses cookies to improve your experience while you navigate through the website. Out of these cookies, the cookies that are categorized as necessary are stored on your browser as they are essential for the working of basic functionalities of the website. We also use third-party cookies that help us analyze and understand how you use this website. These cookies will be stored in your browser only with your consent. You also have the option to opt-out of these cookies. But opting out of some of these cookies may have an effect on your browsing experience.
Necessary Always Enabled
Necessary cookies are absolutely essential for the website to function properly. This category only includes cookies that ensures basic functionalities and security features of the website. These cookies do not store any personal information.
Non-necessary
Any cookies that may not be particularly necessary for the website to function and is used specifically to collect user personal data via analytics, ads, other embedded contents are termed as non-necessary cookies. It is mandatory to procure user consent prior to running these cookies on your website.
SAVE & ACCEPT
423 shares